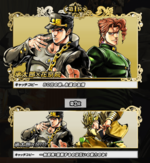 In the Preliminary Round, 24 teams of two characters are grouped randomly into 6 brackets labeled A through F. One pair from each bracket moves on to the final, along with the 2 Combo Campaign winners, for an end result of 8 teams.