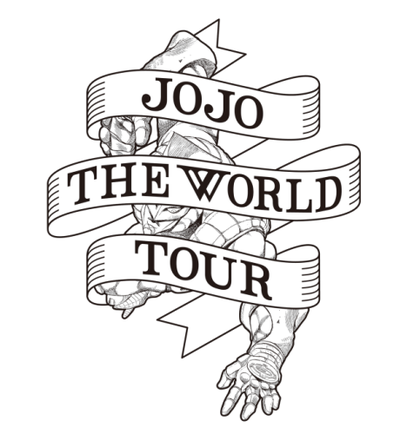 JOJO THE WORLD TOUR was a smartphone promotional event for the JoJo's Bizarre Adventure series which was held in Japan, USA, Italy, and France from March 29, 2014 to May 18, 2014 at numerous locations.[1]

During the event, participants could travel to certain designated locations where they could download 47 special wallpapers or read around 1000 sample pages from Parts 1-8 of the manga. Each part had about 100 pages which could be read.[2]

In order to participate, one would have to access the official website on their phone and select the stage that they want to participate in. Each stage had a list of participating locations which would be displayed. After going to that location, they could select which part they wanted to read on their phone.

JOJO THE WORLD TOUR also had special t-shirts with the wallpaper designs which were awarded to a total of 47 people. It was possible to apply to win a t-shirt by following the official @JOJO_TOUR2014 account and tweeting to them with a hashtag and desired prefecture.

After Stage 4, they opened up the event to anybody living anywhere in Japan, the United States, France, and Italy. Participants would not have to travel anywhere and could read the manga and download the wallpapers from their own home.