Urban Guerrilla and Doremifasolati Do, Part 1 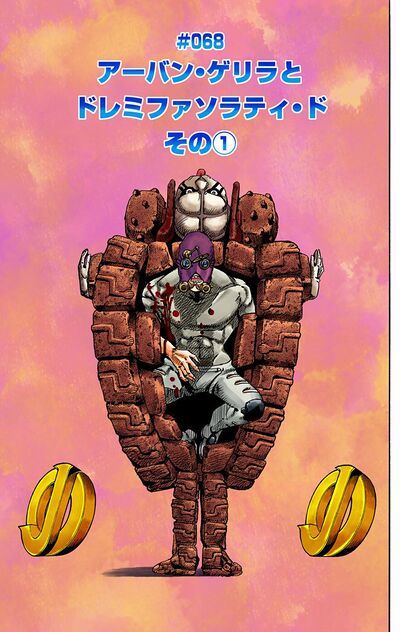 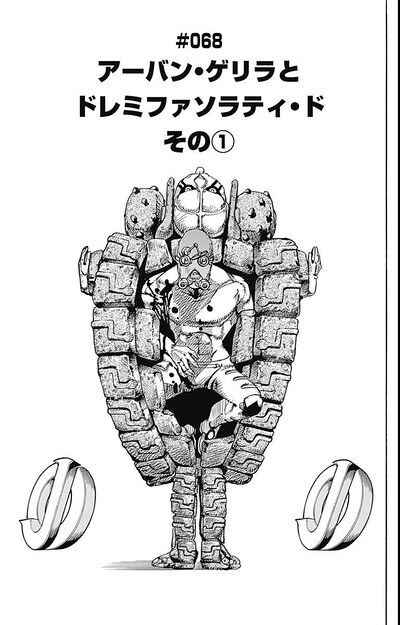 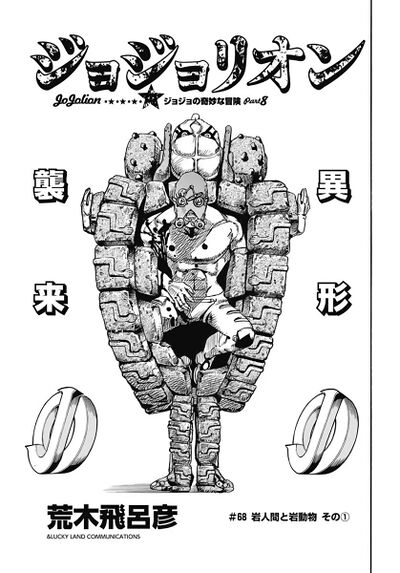 Urban Guerrilla and Doremifasolati Do, Part 1 (アーバン・ゲリラとドレミファソラティ・ド その①, Āban Gerira to Doremifasorati Do Sono 1), originally titled The Rock Human and the Rock Animal, Part 1 (岩人間と岩動物 その①, Iwa Ningen to Iwa Dōbutsu Sono 1) in the UJ release, is the sixty-eighth chapter of JoJolion and the nine hundred fifteenth chapter of the JoJo's Bizarre Adventure manga.

The chairlift on which Josuke and Rai Mamezuku are sitting begins to collapse as the rope detaches itself from a pole's sheaves.

The two Rock Organisms fully emerge from the ground near Yasuho, the human-like one being named Urban Guerrilla, and the tank-like one being named Doremifasolati Do. Analyzing them, Mamezuku wonders if the tank-like one could be described as a Rock Animal. Urban Guerrilla, enraged, threatens to cut off Mamezuku's limbs. The Rock Human then also considers what to do, thinking about whom to kill first in order to secure victory. Mamezuku attempts to swing his knife into Urban Guerrilla again, but the latter goes back into Doremifasoliti Do's cavity, protecting his vitals. Nonetheless, Mamezuku manages to stab him in the leg before the shell fully closes and Doremifasolati Do goes underground.

Yasuho flees, fearing that she might be targeted first. From his chair, Mamezuku analyzes Doremifasolati Do's power, which consists of fusing itself to the soil on the front before rejecting it at the back, allowing him to travel underground without leaving a trace. Mamezuku explains to Josuke that inside the seventh pole, there is fuel with which they can light the enemy on fire, but Josuke, focused on helping Yasuho, drops down despite Mamezuku's insistence. Seeing that, Mamezuku concludes that Josuke may be someone that he can count on, at least after he obtains the Locacaca. Mamezuku then begins to use his power to swing along the rope and reach the seventh pole.

On the ground, Josuke runs toward Yasuho, who shows him a map of the area with her smartphone. Paisley Park has shown her a bedrock area nearby which may slow down their enemy. At the same time, Doremifasolati Do surfaces. Josuke uses Soft & Wet to attack him with several bubbles, but they get transported at his back before they can explode. Josuke decides to run. The enemy is faster, and the threads already start to pulverize Josuke's shoes. Launching another wave of bubbles, Josuke uses his belt to catch the bubbles and lift himself momentarily before grabbing Yasuho's arm and land near her. The couple flee again, Doremifasolati Do behind, and manage to jump onto a great boulder, the Rock Animal angrily staring at them.

Meanwhile, Mamezuku has almost reached the seventh pole and uses his remote to open a hatch containing a gas tank. But he sees that Urban Guerrilla is already at the top of the pole. He's left Doremifasolati Do's shell and crept up to Mamezuku, as he's decided to kill him first, and already his Stand Brain Storm has reached Mamezuku's arm and face through the rope.