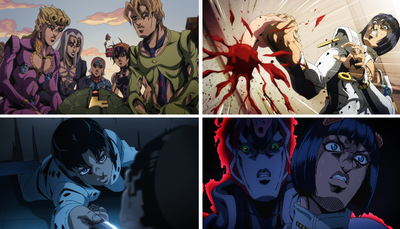 "The Final Mission from the Boss"

The Boss's Last Orders (ボスからの最終指令, Bosu kara no Saishū Shirei)[1] is the twentieth episode of Golden Wind and the one hundred thirty third episode of the JoJo's Bizarre Adventure anime. The episode covers from Chapter 516 to Chapter 519 of the original manga, though without the first half of Chapter 519.

Trish looking up at the bell tower

Team Bucciarati has gathered and acquired the final instructions to deliver Trish to her father. The team must bring her to the San Giorgio Maggiore church within 15 minutes of activating the disc, with one member accompanying her to the top of the belfry while the others remain inside of their boat. Moreover, said protector mustn't bring any weapon or communication tool with him. As they reach the San Giorgio Maggiore island, the team begins to wonder how they will enjoy their well-earned vacation in Venice, only for Bucciarati to severely remind them that the mission is not over yet and that the last assassin may be lurking near. Giorno suddenly volunteers to accompany Trish, only to be shut down by Abbacchio who claims that Bucciarati should have the honor instead. Indeed, neither Giorno nor Bucciarati have kept their ultimate goal in sight and Trish's delivery is a once-in-a-lifetime opportunity to approach the Boss. Thus, Bucciarati asks Giorno for one of his brooches as a "good luck charm", Giorno understanding the hint and giving him a brooch which Gold Experience has turned into a living thing to track it.

Entering the empty church, Bucciarati and Trish eventually reach the elevator toward the top of the belfry but their walk is interrupted when Trish succumbs to the pressure and hesitates stepping inside of the elevator. Anxious about what is about to happen to her, Trish is told that she will probably change identity and hide in a safe haven. Moreover, Bucciarati reassures her that the Boss is sure to love her as any father would for his child. Bucciarati sees that the elevator has almost reached the top of the elevator. Suddenly, he realizes that Trish has disappeared and that only her severed arm remains in his hand. All along, the Boss had planned to personally kill Trish to get rid of her.

A younger Bucciarati about to kill a thug

Bruno Bucciarati's past is unveiled. Bucciarati was once an ordinary child, the son of a humble fisherman. When he was seven, his parents divorced and despite his mother's plea, Bucciarati had the insight to see that his father was the most heartbroken and he chose to stay by his side to support him. But when he was 12, tragedy struck his family again. Bucciarati's father accidentally surprised a drug dealer in the middle of business, then shot down only to escape by a hair's breadth thanks to a coast guard and he ended up in a hospital. The drug dealers came back to finish him off, but the young Bucciarati had stood watch and stabbed both men in cold blood to defend his father. With that crime, he was thus forced to join a gang for protection. Initially believing Passione to be righteous, he subsequently discovered that not only did they sell drugs, but that the Boss, the man that Bucciarati believed to be righteous and the true form of justice, was the one behind the drug trade that ended his father's life the entire time.

In the now, Bucciarati realizes once again how monstrous The Boss truly is and how he only used Bucciarati to fulfill his own selfish desires. Deciding that he had enough, Bucciarati vows to kill the Boss and gives chase, looking down the elevator shaft through a zipper. Unable to see The Boss's face and certain that he will kill Trish shortly, Bucciarati manages to let the brooch fall and pin itself to the Boss's coat, then slides down the elevator and zips to a dark crypt, actually overtaking the Boss and waiting in ambush behind a column.

"I'd like to show you something... as a parting gift."

However, the Boss addresses Bucciarati directly, warning him to step down on the threat of death. Taken by surprise, Bucciarati leaps out of his hiding spot and tries to punch his foe with Sticky Fingers, only to see that he has disappeared and an unseen Stand has intercepted his arm, threatening to break it. He releases himself from the grip by zipping his arm, but when he cuts the column, no one is here. The unseen Boss asks again why Bucciarati is attacking him, but Bucciarati is too disgusted to bother answering him. Taking out a cell phone he's hidden inside of his body, Bucciarati contacts Giorno to track the location of the Boss, only for Giorno to tell him that he's very close. Bucciarati cuts another column to finally unmask the Boss, but to his shock sees a reflection of himself. King Crimson, the Stand of the Boss then emerges from the shadows, eclipsing its master's features. Presenting his ability to erase time, King Crimson then punches through Bucciarati's stomach as he screams in agony. 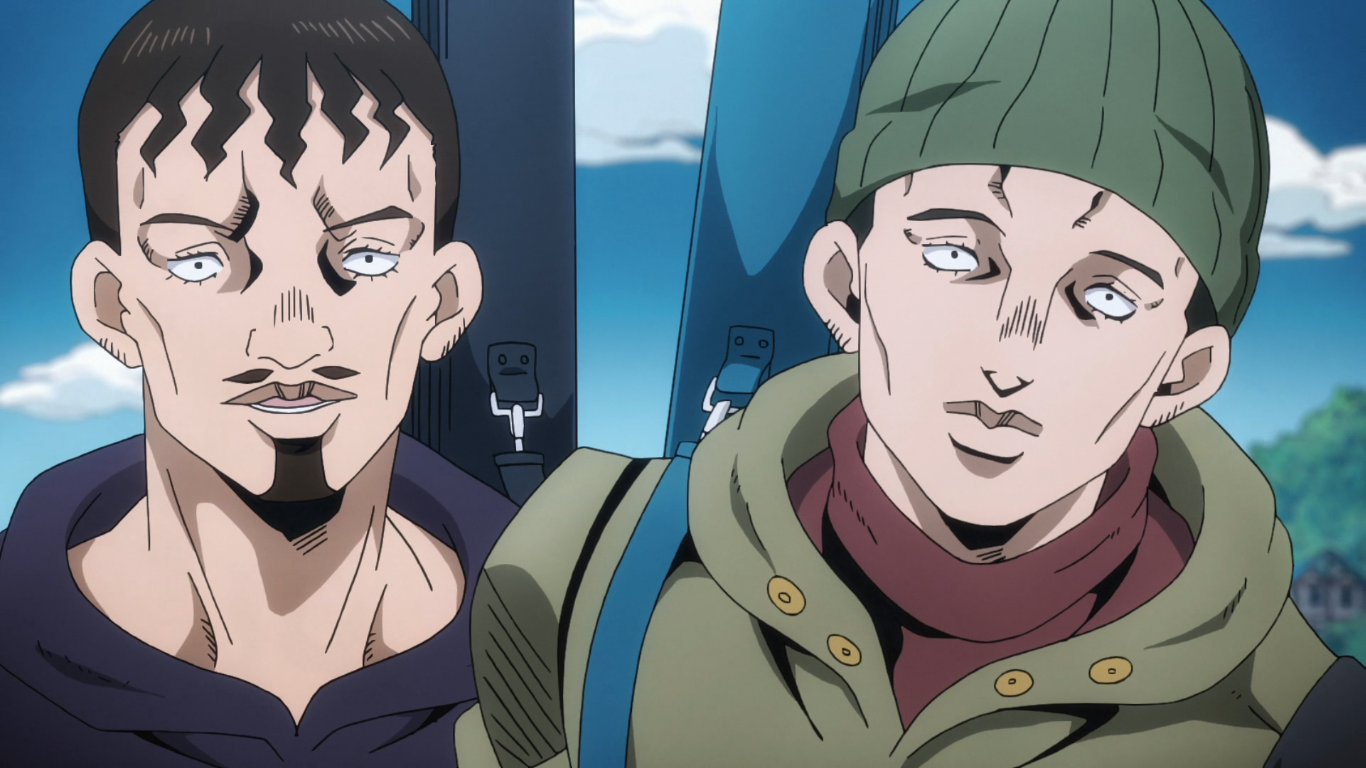