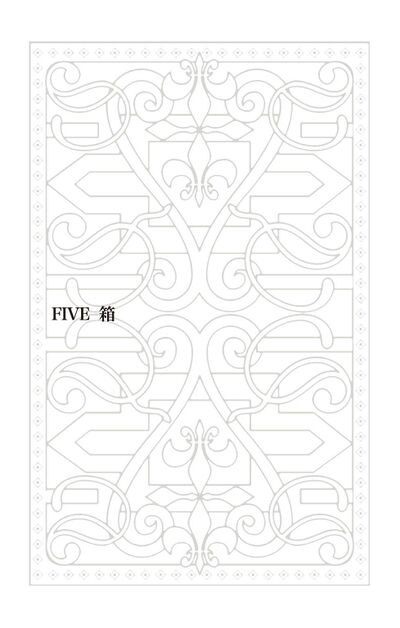 FIVE: Box (FIVE・箱, Faibu Bako) is the fifth chapter of JORGE JOESTAR, a light novel based on the JoJo's Bizarre Adventure series.

George, Erina, Lisa Lisa, Straizo, and Penelope head to a secret room in the basement. George looks at his father's severed head, feeling as if Jonathan still looked alive. Despite being a baby at the time she was carried by Erina in the coffin, Lisa Lisa has memories of a fearsome man who was in the coffin with them. Erina has Straizo and Penelope go upstairs so she can tell the story of how she survived after the ship's explosion. Before Erina could begin, Lisa Lisa grows impatient and asks Erina if she saved Dio back then.

Lisa Lisa had gone to England researching about Dio Brando's life. She went to the remains of the Joestar mansion and talked to people in town, who told her about Jonathan, Erina, and Dio. To Lisa Lisa's surprise, Dio was the most popular person in town and half of the town's citizens still believed he was innocent. People believed that Dio never had a girlfriend despite being popular with the ladies because he loved Erina. Erina emotionally scolds Lisa Lisa, saying that a little sixteen year old girl like her should never attempt to speak about matters such as love as if she could understand. She quickly calms down, realizing Lisa Lisa couldn't understand since Erina hasn't told them anything yet.

Erina finally begins telling her story, describing Dio's vile personality and everything he did to Jonathan and herself as children. Eventually, she gets to the point where she entered the coffin with the baby Lisa Lisa in her arms after Jonathan died in the ship they were on for their honeymoon. The coffin fell into the water after all the explosions. Erina opened the lid of the box to check if there was anyone floating in the water that she could save, when she saw a hand attempt to grab her arm from under the box. As she attempted to close the lid, Erina saw Dio's terrifying face floating on the water. Dio had escaped from Jonathan's grip as the explosion hit and stolen his body. He then impaled Jonathan's feet on a stick of wood embedded on the side of the box, allowing him to travel together with the coffin. When Erina opened the lid, Dio managed to grab Lisa Lisa out of the coffin and cradled the baby by his chest, using her as a hostage. Dio offered to spare Lisa Lisa if Erina offered her blood to him. As Erina could not refuse, Dio handed back Lisa Lisa and drank a lot of blood from Erina without restraint.

Erina could hear Dio struggling in pain that night, thrashing against the water and the coffin. As a nurse, Erina knew Jonathan's body would have been rejecting the foreign tissue of Dio's head. Before the sun rose, Dio knocked on the lid and asked to drink Erina's blood once more. In order to keep Erina's body healthy, Dio caught a fist full of fish. Using his Space Ripper Stingy Eyes, he then cooked the fish on a floating piece of ship debris near the coffin. Erina took some fish, chewed it, and then fed it to the baby Lisa Lisa. Noticing Erina wasn't eating any herself, Dio remarked that Erina should keep the baby within her womb healthy as well, which shocked Erina as she did not yet realize that she was pregnant. Erina began eating while Dio drank the sea water and converted it from salt water to fresh water using his vampiric abilities. He then slipped his fingers into Erina and Lisa Lisa's arms to inject water into their bodies. Dio was about to go back into the water and hide underneath the coffin before the sun rose but Erina had realized the coffin had two compartments and told him to get in the bottom layer. However, Dio realized Erina's scheme was to have an easier advantage over Dio, as him being in the bottom compartment would allow Erina to easily lift the lid and have the sun shine on him. Dio threatened Erina for attempting to fool him and drained more of her blood as punishment. As further punishment, Dio pushed Erina into the bottom compartment of the coffin and took Lisa Lisa with him into the top compartment, threatening to eat her if Erina tried something stupid.

Dio then flipped the box and later used a mysterious power to kill a bird that was sitting on top of the coffin. After he roasted it, he offered it to Erina, who wondered how Dio managed to open the lid and prepare the meal without entering the sunlight. Over time, Dio started becoming unstable as he verbally harassed and violently tortured Erina. For hours, he would go on about how Erina was useless and it was her fault Jonathan died. When Erina would start crying, Dio changed his tone and acted gentle to keep Erina off balance. When Erina started apologizing, Dio thought she was mocking him and used his invisible power to drag Erina out of the coffin and threw her into the water. She would nearly drown and then Dio would use his power to pull her back into the coffin. This went on for days, and Dio would drink her blood in between. Each time, Erina would be near death but Dio would revive her by feeding her enough to restore what he drank. Although she only heard his voice the whole time without seeing him, Erina felt like his tool after the torture. She lost her sense of reality and even agreed to marry him after the constant manipulation.

One night, Dio opened the lid of the box and appeared in front of Erina. His wounds were almost completely healed from drinking Erina's blood. Seeing the vampire, Erina finally realized that this man was Dio Brando and not her owner, and she was Erina Joestar. Dio asked Erina to give her new husband a kiss, but Erina had reclaimed her sense of self and remarked that there's no muddy water to wash her mouth with afterwards. Erina realized Dio hadn't changed in the past ten years, and he must have been torturing Erina because he wanted Jonathan to see it, so Jonathan should be somewhere nearby. She knew Dio wouldn't leave Jonathan's head behind on the ship because of his obsessive nature. Believing Jonathan was by her side even if he had become a zombie, Erina was no longer afraid of Dio. After pointing out that Dio was doomed by his shallow mind and overwhelming self-importance, he throws her into the sea out of anger, where she manages to find Jonathan's head hidden under the debris near the coffin. If he had actually become a zombie and was watching everything, Erina knew it was her duty as his wife to kill him so he wouldn't suffer any more. Erina quickly swam towards Jonathan's head, only to find that his head did not appear to be a zombie, and miraculously still looked alive without decaying. Dio worriedly pulled Erina out of the water with his mysterious power, exclaiming that Jonathan would eat her because he also believed Jonathan became a zombie. Confused as to why Jonathan wasn't doing anything to Erina, Dio wonders how long Jonathan would continue pursuing him. Erina refused to let Dio harm Jonathan's head and grabbed a piece of driftwood, which she then stabbed into the side of her neck. After seeing Dio's shock, Erina laughed in relief before losing consciousness, knowing that Dio couldn't let her die. Erina woke up after receiving blood from Dio, who also stitched her wound using knowledge he learned from various books he previously read. Dio had ended up giving Erina as much blood as he had drank from her, leaving him even weaker than he was before he first confronted Erina. For the first time, Erina realized just how lonely Dio was. Erina could have killed Dio then, but she felt pity for him and placed him into the bottom compartment of the coffin.

As Erina finishes telling her story, she claims that her sin was letting Dio Brando remain alive. After she was rescued by a ship, she had the fisherman weigh the coffin down and sink it. Erina had hope that as long as Dio Brando was still alive, Jonathan's body would also be alive, and she did not want to lose the chance to get his body back one day. Lisa Lisa explains that the power Dio had sounded like a Stand, which she learned that some people have while she was training with the Ripple masters. As they go upstairs, Penelope hugs Jorge, crying that the Canary Islands is a scary place. Seventy people had just perished in La Palma's church, including George's doctor who they had spoken to earlier. Lisa Lisa mentions that everyone who died had seen the Mothman and covered the walls of the church with drawings of it before they set the church on fire. Erina decides that it's time to move to England, and offers to take Penelope with them.

(Mentioned only)
Will A. Zeppeli
Stands