Jack the Ripper and Zeppeli the Strange, Part 5 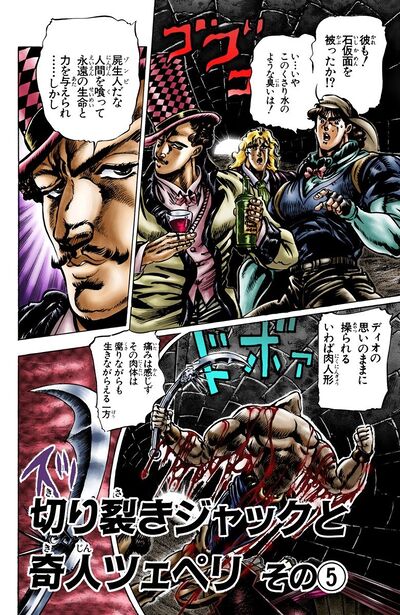 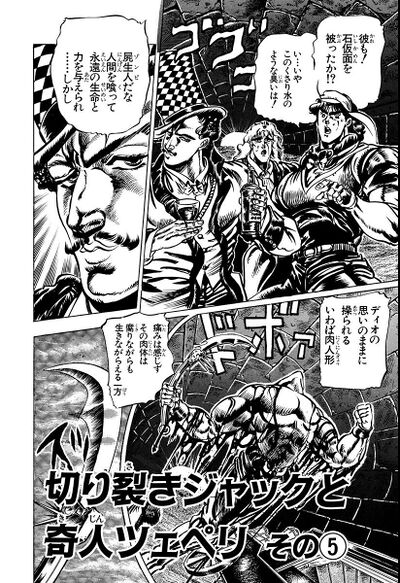 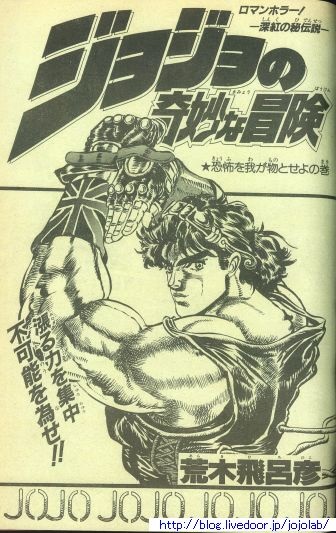 Zeppeli explains to Jonathan and Speedwagon how the man standing in front of them is a zombie; immortal so long as he consumes human flesh, but completely subordinate to his vampire master, Dio. Jack the Ripper displays his power by cutting the very air around him with his knife. To further demonstrate his power, he severs one of his fingers and jams his knife through his own cheeks while describing what fear they must be feeling. Zeppeli presumes that Jack's purpose for living must have been to slice things to pieces with his knife, and that he was evil even when he was human. Zeppeli then uses the battle to further instruct Jonathan; telling him that thinking as his enemy does is crucial to battle, as is determining his opponent's next move. Zeppeli demonstrates this by predicting Jack's attempt to close off the entrance to the tunnel, preventing them from escaping back into the sun. He is proven correct when the zombie throws the carriage they were riding in at them. Though they all manage to dodge the attack, the carriage crashes and collapses the tunnel entrance.

Jack the Ripper laughs as scalpels emerge from all over his body. Zeppeli takes a sip of his wine, seemingly unconcerned. Jack the Ripper uses his strength to launch the scalpels at them. Jonathan and Speedwagon take cover behind a rock to shield themselves, but the scalpels manage to cut through the rock and injure Speedwagon's shoulder.

As three of the scalpels fly at Zeppeli, he spits out some of the wine he drank a moment before. The wine turns into three rapidly spinning discs of liquid that cut Jack the Ripper's flying scalpels straight down their blades. Zeppeli calls this technique the Ripple cutter. As he counters Jack's follow-up attack with the wine bottle he's holding, Zeppeli explains to Jonathan that courage is being able to master his fears, and, likewise, he can use it to control his breathing and master the power of Ripple. Zeppeli then uses a Sendo wave kick on Jack the Ripper, burning the left half of his face severely. Zeppeli tells Jonathan that he must be the one to finish off the zombie before proceeding to take another drink of the wine, not a drop of which was spilled during the fight.

Author's Note
“
I finally got my hands on a CD. There's this software rental place in my neighborhood and lately I've been going wild listening to bands like ZZ Top!!
”
—Hirohiko Araki
“
をやっと買いました。近所にソフトのレンタルもあり、等を聞き狂ってます!!
”
—Hirohiko Araki