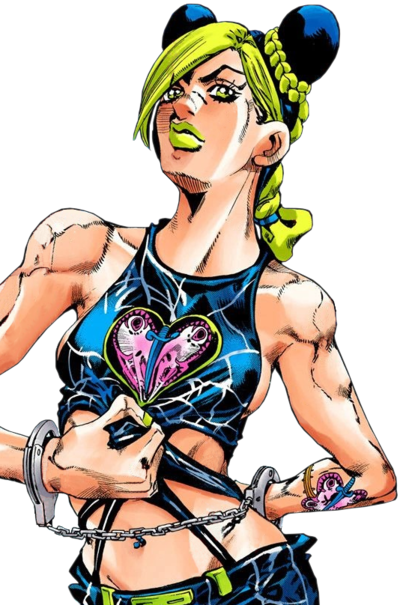 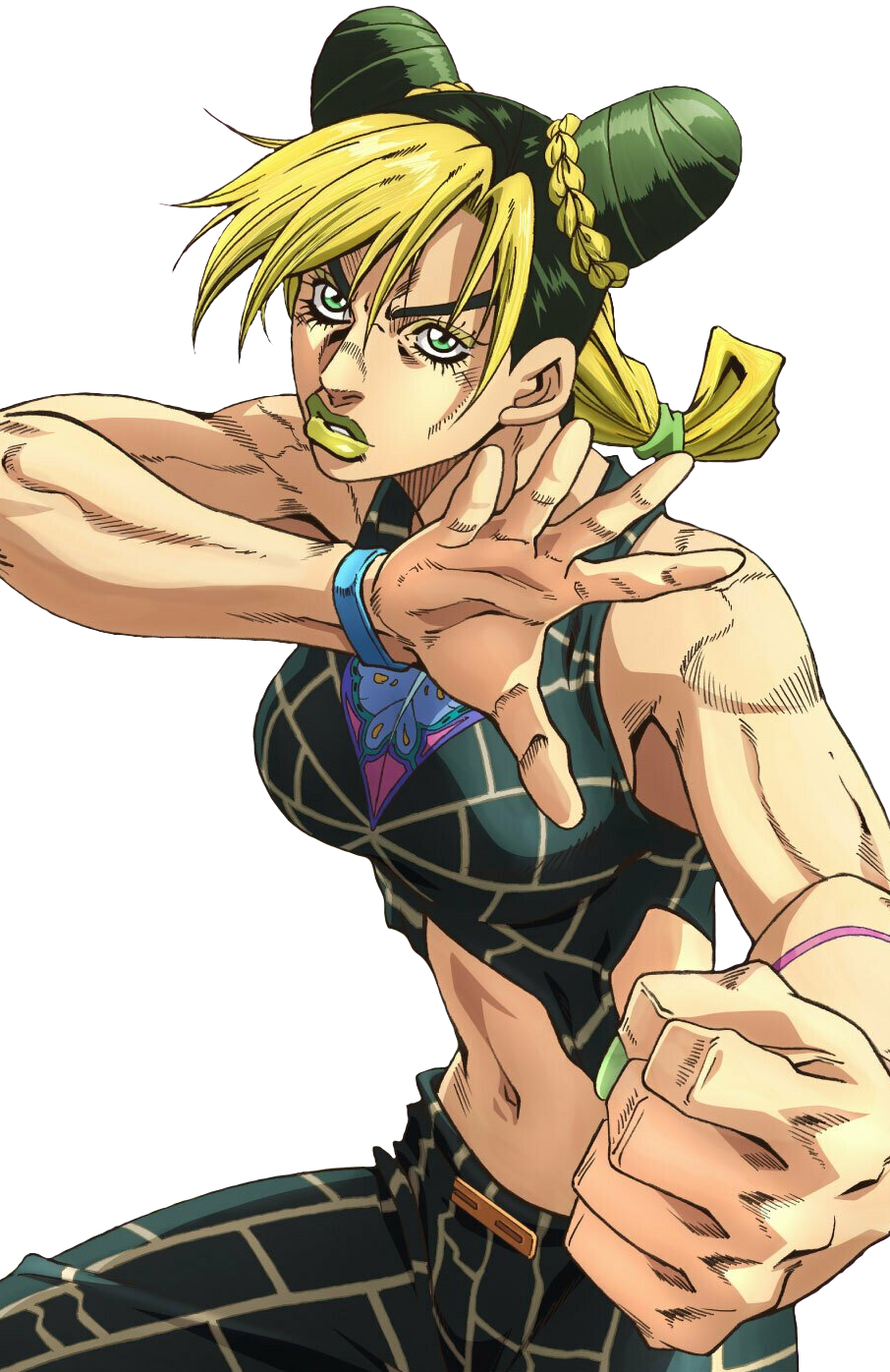 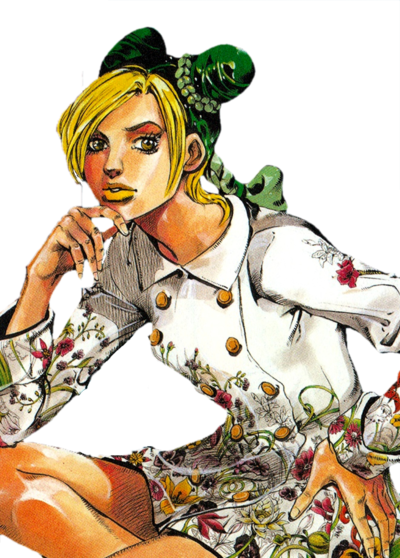 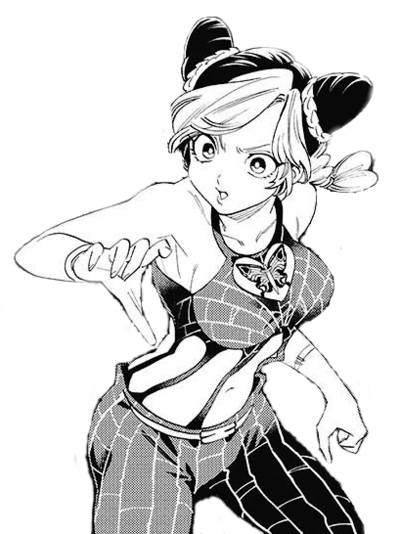 Jolyne Cujoh (空条 徐倫, Kūjō Jorin) is the main protagonist of the sixth part of the JoJo's Bizarre Adventure series, Stone Ocean, and the sixth JoJo of the series. She is the daughter of an American woman and Jotaro Kujo, the protagonist of Stardust Crusaders. 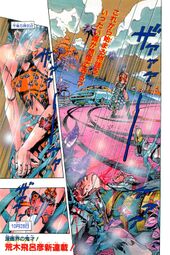 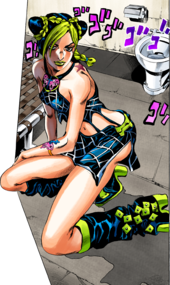 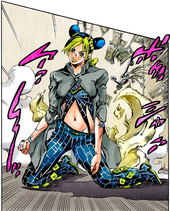 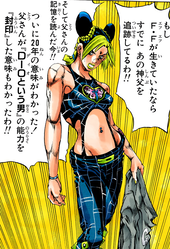 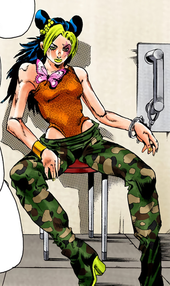 A leotard with camouflage pants, a butterfly on her chest, and a bracelet on her right hand. She also has a star over her left eye and long, loose hair in the back. Her left arm is not tattooed yet.

She wears a different belt around her waist with a long cape attached to the back. The accessory on her belt has a different design, but it also says "JO" like the previous one.[11]

Flighty, abrupt, and snappy with her elders, Jolyne in adolescence would undoubtedly be considered a delinquent and a lost cause. Bitter at Jotaro for being absent from her life, she tried multiple times to catch her father's attention by committing various minor crimes and was arrested several times as a result. Because of her father's absence, Jolyne was said to be dependent on the affection and approval of those around her,[12] and she was ready to cover Romeo's accident, resulting in her being sentenced to 15 years in prison for it.[3]

After acquiring her Stand and being told by Jotaro of his love for her, Jolyne noticeably matures, becoming more courageous and confident. "Reviving" Jotaro, who fell into a coma due to Whitesnake stealing his Stand and memory, turns into her first priority.[13]

Jolyne retains her confrontational attitude throughout the story. A former delinquent living in a maximum-security prison, Jolyne had to toughen up and can be especially rude, frequently taunting her enemies. She also advocates aggressively asserting herself, especially in prison, and once told F.F. to violently confront an inmate who cut in the queue for buying their lunch.[14] Jolyne is particularly violent in her fights; she's used the cutting ability of her string to gruesomely wound her opponents, severing ears and nails,[15] for instance. Jolyne usually doesn't seek to kill and even said that she didn't want Ermes to become a murderer.[16] However, she readily uses lethal force against her archenemy Enrico Pucci, as he was the one enemy she explicitly said she would kill.[17]

Jolyne also has a vindictive side and repays tenfold any wrong committed against her, notably indirectly cutting Romeo's tongue for betraying her[18] and forcing her crooked attorney to crash his car.[8] Moreover, Jolyne still holds a slight grudge against Gwess, her first enemy, and wants nothing to do with her despite the latter's effort to behave in front of Jolyne. More humorously, Jolyne kept a grudge against alligators in general after Limp Bizkit revived one that attacked her, and she had fun tossing something at another alligator's head as a form of revenge.[19]

Jolyne possesses a fierce determination, carrying her through several battles and inspiring her companions. After learning of DIO's plan, Jolyne took pride in her lineage and opted to continue Jotaro's effort to seal the menace that DIO had left behind. Jolyne stoically endures the hardships she faces and carries on her goal, disregarding the suffering and possible risks. For instance, when she was brought to the maximum-security ward, Jolyne was only momentarily disturbed by the horrible living conditions of the cell (the food tray was covered in insects) along with the harassment of the other inmates in the ward and quickly soldiered on through the ordeal.[20] Her determination is so great that she was willing to lose life or limb to defeat her enemy and save her comrades, an inclination so strong that it culminated in her sacrifice to keep Emporio away from Pucci.[9] One good example of the strength of her determination is when she set herself on fire to buy enough time to attack Rikiel, ignoring the risk taken to herself since her body was made of string.[21] Even still, Jolyne once expressed her doubts about her desire to stop Pucci after Weather Report's death and the priest's second escape.[19]

Common in her lineage, Jolyne has righteous morals and treasures her family and friends. She would selflessly do everything in her power to help her companions and random victimized people, once helping a mistreated prisoner to take back stolen money from her tormentors.[22] Jolyne is willing to believe in the good in people, which resulted in a share of betrayals, but also earned her F.F.'s friendship.[23] Jolyne is especially sweet to Emporio, her real first ally in Green Dolphin Street, and despite its status as an enemy, she didn't want to kill the Green Baby. Jolyne's primary motivation for investigating Whitesnake was her love for her father, though Pucci exploited this affection to escape her when he tossed Jotaro's memory disc inside of a dying Anasui, putting her through a difficult choice and forcing her to try to save her father's memory.[24] 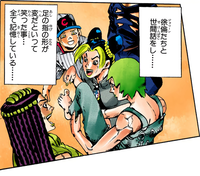 Outside of combat, Jolyne behaves like an average young woman, if not a teenage girl, hanging out with her friends and occupying herself the best she can in prison, as she is also fun-loving. Jolyne notably played ball with F.F. and Ermes,[25] additionally making herself a navel ring while in isolation.[26] Unlike her father, Jolyne is fairly extroverted and easily expresses her feelings to others. She is an inherently social woman and can converse with her fellow prisoners easily, asking for explanations about the ins and outs of Green Dolphin Street.

According to Hideto Azuma, Araki's editor at the time of Stone Ocean, he had requested that Jolyne's character was to be a man as Weekly Shonen Jump was a magazine for young teen boys. However, Araki insisted on Jolyne's gender, saying that the fact that readers wouldn't accept a female lead was exactly the reason Jolyne had to be a woman.[31]

Araki created Jolyne with the hopes of "making up" for his previous (and in his eyes, failed) attempt at a female protagonist. Aside from offering an interesting contrast to most shonen comics, he thinks she is a "real woman" sorely lacking in the medium. The role reversal between her and her father was devised for her character to go beyond the typical archetypes found in Japanese fiction.[32]

Fairouz Ai, Jolyne Cujoh's voice actress in the anime, was fascinated by the female protagonist since her second year at junior high school.[33] Jolyne's character is what helped her to stay optimistic while job-hunting or working, and inspired her dream of appearing in an anime adaptation of the manga and into her career as a voice actor. In a 2019 interview, Fairouz stated that she couldn't pull off Jolyne, but would've loved to play a supporting character, like Foo Fighters.[34]

Kira Buckland is Jolyne Cujoh's English dub voice actress in the anime. It's been her 8-year-long dream to voice Jolyne,[35] and she's always wanted to voice a Joestar. Buckland also felt that Jolyne is a strong, well-written, nuanced and interesting character.[36]

In a 2020 Valentine's Day poll in the official app, Jolyne Cujoh won first place for "characters I'd like to give me chocolate", having 4,489 votes.