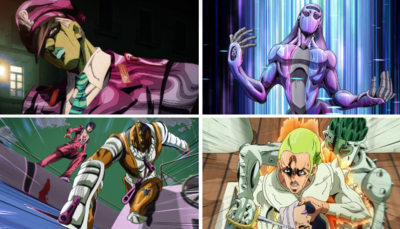 Moody Blues Strikes Back (ムーディー・ブルースの逆襲, Mūdī Burūsu no Gyakushū)[1] is the sixth episode of Golden Wind and the one hundred nineteenth episode of the JoJo's Bizarre Adventure anime. The episode covers from Chapter 459 to Chapter 461 of the original manga with parts taken from Chapter 484.

A flashback is shown detailing the events leading to Abbacchio joining Passione. In the present, Abbacchio must use his Stand Moody Blues to investigate how his teammates keep disappearing and solve the mystery of the enemy's ability.

Before engaging in the mafia, Leone Abbacchio was a policeman

Leone Abbacchio was once a dedicated policeman and committed to his mission to help the people and fight for justice. However, his crime-ridden city, the ungratefulness on the people, and the fact that all criminals bribed officials to get away with their crimes eroded his enthusiasm. One night, he finally accepted the bribe of a pimp, telling himself that he was only keeping the peace. Later, Abbacchio investigated a robbery and was forced to arrest the robber, the same pimp he'd taken bribes from, and whom had just killed a man. Destabilized by the pimp's threats to reveal their deals, Abbacchio couldn't see the criminal draw his gun and was only saved when his partner jumped out of the dark at the last moment, taking a fatal bullet meant for him. Dishonored and thrown out of the police, Abbacchio became a destitute and hopeless man until he met Bruno Bucciarati.

Back to the present, a recap of the last episode is shown, as Giorno Giovanna gets attacked by the enemy, Bucciarati dashes to help him, but Abbacchio stops him, seeing that the fly Giorno has created is still there and therefore that Giorno isn't dead yet. However, when Bucciarati tries to zip out the ceiling of the interior, he sees that no one is hidden underneath them, the mystery of the enemy's modus operandi still remains.

Summoning his Moody Blues, Abbacchio begins to investigate the question. Moody Blues turns into Narancia and begins to rewind, copying everything that Narancia was doing minutes ago. Fast-forwarding to the moment Narancia disappeared, Leone and Bucciarati see that Narancia was stabbed, deflating like a pierced balloon and dragged down a drain. Yet, despite Moody Blues tracking the enemy's movements and Bucciarati's ability to zip through walls, they cannot find the enemy. Understanding that their foe has another trick in play and piecing the clues together, Abbacchio morphs his Stand back to its original form and hits the nearest walls. Despite his efforts, Abbacchio is stabbed and taken by the enemy.

Bucciarati now finds himself alone and in a rage punches everywhere with Sticky Fingers. Mario Zucchero thus begins to intimidate the team leader, threatening to kill his companions if he doesn't reveal where Polpo's treasure is hidden. However, Bucciarati has found out his foe's secret. Abbacchio has purposefully made his hands bleed by punching the walls, but his blood is nowhere in sight inside the boat, thus there is a second boat hidden somewhere. Bucciarati has opened the yacht's hull with Sticky Fingers, purposefully sinking it and forcing Zucchero to reveal a second yacht (registered as "Lagoon 2") that was deflated and used to cover the first one ("Lagoon 1") and thus providing a hiding spot. Having revealed himself, Zucchero resorts to pointing his Soft Machine's dagger at Abbacchio's throat, but Bucciarati is faster as he extended Sticky Fingers' arm, punching Zucchero from afar by detaching his arm and disabling him for good.

Abbacchio returns to his normal self and is satisfied that they have won the battle.

In an after-credits scene, another flashback details how Bucciarati convinces Abbacchio to join his team.