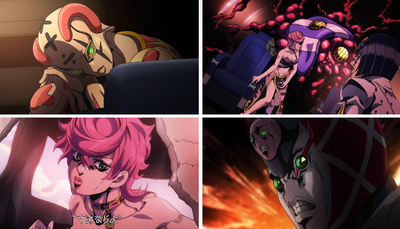 Spice Girl (スパイス・ガール, Supaisu Gāru)[1] is the twenty fifth episode of Golden Wind and the one hundred thirty eighth episode of the JoJo's Bizarre Adventure anime. The episode covers from Chapter 537 to Chapter 540 of the original manga.

The fight against Notorious B.I.G continues. After the enemy Stand has taken out most of Team Bucciarati, Trish must now step in to protect Giorno's remaining hand from it, awakening her Stand Spice Girl in the middle of the fight.

Trapped in the cabin of a flying plane with Notorious B.I.G, Trish has noticed that Giorno's brooch is turning into a brand new hand that will allow him to regain his powers. However, the movement of the transformation is attracting the enemy Stand. As the plane approaches the Tyrrhenian Sea, Trish must now try to protect both the hand of Giorno and herself from Notorious B.I.G. Seeing that she can activate the reclining seats, she pushes the button causing a seat to automatically tilt and baits the Stand into attacking it. Using the distraction, Trish now approaches the hand but Notorious B.I.G then ignores the now broken seat to attack Trish' boot. Unfortunately, Trish has had some drink splashed onto her boot and Notorious B.I.G was attracted to the droplets.

Panicking, Trish begins to scream but the boot suddenly falls off her foot, saving her as Notorious B.I.G attacks it. She suddenly hears someone telling her to take the brooch slowly without wasting time and discovers a Stand beside her. The new Stand presents itself as Trish's own ability and tells Trish to command her. Heeding the ally Stand's advice, Trish takes the brooch and falls against a seat trying to avoid Notorious B.I.G, but suddenly falls over as the seat deforms. The ally Stand explains that the seat has been softened, incidentally making it able to resist Notorious B.I.G's tendril strike. Moreover, the snap-back of the seat sends the enemy Stand flying, causing a chunk of it to be cut when it collides with a seat.

The ally Stand explains that the determination Trish's acquired has led to its own appearance and the development of her ability when Notorious B.I.G suddenly comes back. Against the Stand's advice, Trish runs toward the closet. She is almost caught and Notorious B.I.G slips through the cracks, but her Stand then softens a nearby clock, using it as a bait. Taking a rod, Trish's Stand then drives it slowly into Notorious B.I.G, seemingly destroying it. The Stand then presents itself as Spice Girl.

Trish then heads toward the cockpit and sees Bucciarati opening the door to check on her because of a light engine malfunction. Just as she tries to tell him about the hand, Bucciarati then nervously tells her to remain silent and slowly advance towards him. At the same time, the plane is rapidly losing altitude. Indeed, Notorious B.I.G has now grown to a humongous size, as a speck of it has reached the jet engines and begun absorbing the energy they released. Even if Bucciarati orders Abbacchio to perform an emergency landing, he has no hope of actually escaping Notorious B.I.G.

Trish suddenly runs toward the cockpit and pushes Bucciarati inside as she closes the door, attracting Notorious B.I.G. However, she then softens the walls of the cockpit, preventing the enemy Stand from breaking in. Then using Spice Girl to smash the cockpit apart from the plane, she turns it into a giant makeshift parachute, making it slower than a falling plane and thus luring Notorious B.I.G away from the team. The plane eventually explodes, taking out the enemy Stand.

Impressed by Trish's newfound power, the two men realize that the situation may have taken a turn for the best as the plane crash may convince Passione that they are dead. However, Bucciarati spots the last piece of Notorious B.I.G hanging on Abbacchio. Just like Giorno, Bucciarati lures it onto his arm by punching in the air with Sticky Fingers, and Spice then severs the arm, to Abbacchio's shock. Trish then finally reveals Giorno's new hand, allowing him to heal everyone. It is revealed that the mysterious case of a plane's theft and subsequent crash into the Tyrrhenian Sea remains a mystery and that since then, a monster is roaming in the waters of the sea.

Some time later, the Boss is investigating the rebellion, gathering dossiers about the rebels and trying to guess their whereabouts. Lamenting the dangers of the past, the Boss then notices that on a photo of Trish's home there is a photographic portrait of Donatella dating from when he had met her, 15 years ago on the Costa Smeralda of Sardinia. Realizing that there is a clue to his past, the Boss becomes enraged and fearful as the rebels will eventually trace him thanks to Trish's knowledge and Abbacchio's Moody Blues. With such stakes, the Boss decides to personally head for Sardinia. Incidentally, a maid enters the room to clean it but before she can realize it, the Boss disappears with all the dossiers he's gathered. Puzzled, the maid decides to forget about it and starts to clean the room. 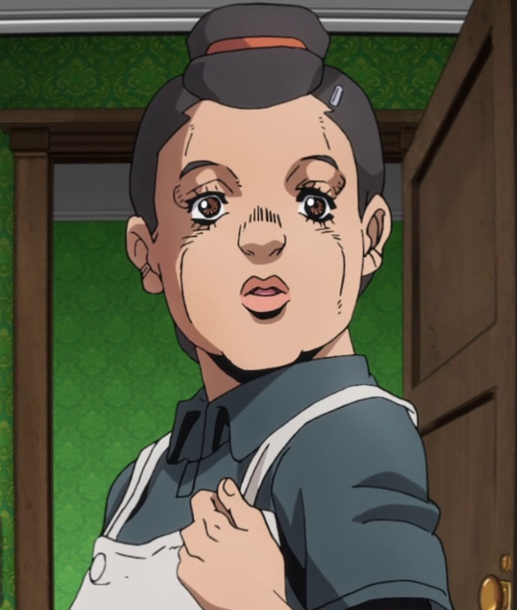 “
The end is near for Abbacchio as soon as the jet takes off. I was silently pleading for him not to go to Sardinia. I remember Sayaka Senbongi being super excited that Spice Girl finally makes an appearance, but she unexpectedly came down with the flu and had to miss a recording.
”
—Junichi Suwabe, Blu-Ray limited edition commentaries
“
I love the part where Trish realizes she's a Stand user. Spice Girl introduces herself, and Trish replies, "Weird, but in a good way.” A perfect spicy heroine! And Risotto is searching for targets he doesn't know the identities of, but that might have been for the best for his squadra. Morally, things might have been more difficult if they could see their targets.
”
—Shinshu Fuji, Blu-Ray limited edition commentaries
“
1. "Soft, yet even more durable than diamonds!"

Spice Girl finally makes its appearance. The heading refers to Spice Girl's explanation of its power to a confused Trish. “We put extra effort into this scene by adding lighting effects on her eyes," Director Kimura recalls. Indeed, Spice Girl's eyes create a powerful impression, lit up against the backlight.

The sound effect when Notorious B.I.G punches the softened clock is comical, like that of a rubber toy. The shot was also used in the billboard after the opening sequence, and the punch was timed with the rhythm of the song. Notorious B.I.G torments the crew during the episode, but it may even look cute here.

Trish says this line as she watches Notorious B.I.G crash into the sea. Kimura remarks, “Trish is particularly cool here. This shot is one of the key shots of the episode, so I asked the animators and postproduction crew to take special care drawing and processing it."

While Trish battles against Notorious B.I.G, the Boss is in a hotel room researching Bucciarati's crew. On Bucciarati's blown-up photo on the wall, Kimura notes, “It looks like he printed it himself, which makes me feel like the Boss is a Bucciarati groupie! The contents of his laptop are also organized, reflecting his meticulous nature."
”
—Yasuhiro Kimura, Blu-Ray limited edition commentaries