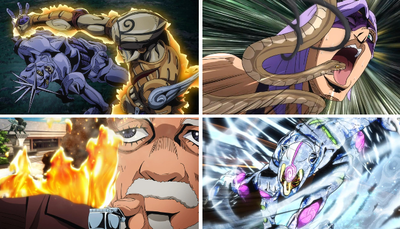 Head to Venice! (ヴェネツィアに向かえ！, Venetsia ni Mukae!)[1] is the eighteenth episode of Golden Wind and the one hundred thirty first episode of the JoJo's Bizarre Adventure anime. The episode covers from the end of Chapter 506 to Chapter 510 of the original manga.

Giorno's battle against Baby Face reaches its end. Meanwhile, the irascible Ghiaccio steadily closes in on the heroes as they approach their final destination: Venice.

Ghiaccio is getting close to the battlefield and informs his leader Risotto Nero, who leaves the matter in his hand. For his part, Risotto keeps threatening a computer expert to perform some analysis. In response to the man's warning about rebelling against the gang, the assassin somehow grievously injures his hand and eye, using an unknown ability.

Thanks to his ingenuity, Giorno has turned the tables on Baby Face's child to Melone's astonishment. While the piranha turns back into Gold Experience's hand, Giorno analyzes his advantageous position and the heavily injured Baby Face is overcome by rage. Melone tells Baby Face to hide and wait for reinforcement but the homunculus  is so angered it rebels and decides to attack Giorno alone. Baby Face launches a punch whom Gold Experience easily avoids, followed by a karate chop that takes him by surprise. Baby Face's reach is indeed extending as it is now growing into an adult. Resummoning its hand, Gold Experience punches Baby Face's cheek which turns into a hand grabbing the fist. Proud of its trick, it attacks but is suddenly brought down, weighted by the motorcycle that Giorno had turned into a hand and let it absorb as another trick. Before it can transform, Baby Face finds himself covered in oil which the bike's spark plug lights aflame and is defeated. Giorno has won and deals a finishing blow.

Later, Ghiaccio arrives at the parking lot, noticing the many stolen cars and suddenly starting a linguistic rant. The assassin immediately calls Melone for clarification just as the latter leaves the express train, arrived in Roma. Armed with fresh knowledge about Giorno, Melone plans to create yet another Baby Face but is suddenly confronted by a venomous snake that bites him, killing him on the spot. Seeing that they've been alone on the roads for a good time, Team Bucciarati deems that they have officially escaped their pursuers. However, Nero contacts Ghiaccio with fresh information.

Moody Blues reenacts Pericolo's actions as instructed by The Boss

Inside of Coco Jumbo, Bucciarati receives an order to rewind Moody Blues to fourteen hours ago next to the dining chair. Moody Blues turns into Pericolo, who retroactively instructs the team how to transfer Trish to the Boss in Venice. Showing a photograph of Venice's train station and the winged lion statue in front of it, the capo tells the team to approach the statue and obtain an OA-disc before destroying the photography. Expressing gratitude to the Boss, Pericolo then commits suicide by shooting himself out of the turtle with a revolver. The group now has a secondary objective to fulfill in Venice. Meanwhile in Venice, the mysterious Boss patiently awaits the delivery of his daughter.

Team Bucciarati splits in two and thus Giorno and Mista are sent together to retrieve the disc. At 4:43 AM on an especially chilly night, the duo is entering the Ponte della Liberta, the only road connecting Venice to the mainland. Suddenly, Giorno briefly loses control of the car as the tires seem to have slipped, propelling Mista (who has been swiping a window) into the left. As the mist on the windows is getting thicker and Giorno decides to open a window, Mista realizes with horror that his little finger has been frozen and has stuck to the ice cold glass on the other side.

Giorno immediately feels an unnaturally chilling wind coming from outside, as Ghiaccio, who is perched on the roof of the car, confronts the duo and shows the same photo Pericolo has destroyed earlier. For his part, Mista is noticeably beginning to freeze against the window he's stuck on. The gunman shoots through the roof, revealing that Ghiaccio is enveloped in a thick coat of ice so hard the bullets cannot penetrate it. Several of the Sex Pistols are trapped by the ice and worse, the bullet holes let the wind blow inside the car, exposing the duo to lethally low temperatures. Humorously, Ghiaccio begins yet another linguistical rant. Stuck on the wheel and unable to create life forms, Giorno uses Gold Experience on some of the bullets Mista shoots at Ghiaccio, which turn into roots that manage to break through the ice because of the heat of the shooting, which throws the assassin out of the car. Ghiaccio's freezing power stops but Mista sees that Ghiaccio is turning his ice shell into a suit and is rapidly skating toward them.

Impervious to bullets, Ghiaccio catches up unharmed but Sex Pistols suddenly place the bullets beneath Ghiaccio's skates, making him trip. Nonetheless, Ghiaccio then freezes the leaking gas to create a makeshift rope and finally manages to grab Mista by the arm. Gold Experience then tries to pummel Ghiaccio but only manage to crack it. In front of such an invincible enemy, Giorno makes a desperate move and drives the car into the sea.