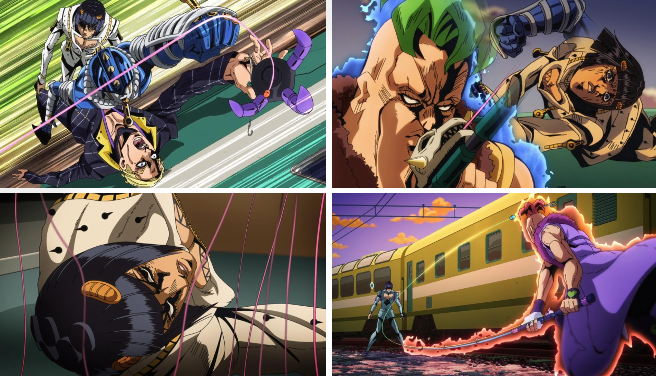 The Grateful Dead, Part 2 ( その②, Za Gureitofuru Deddo Sono 2) is the sixteenth episode of Golden Wind and the one hundred twenty ninth episode of the JoJo's Bizarre Adventure anime. The episode covers from the end of Chapter 493 to the beginning of Chapter 500 of the original manga.

Bucciarati is the only one left able to fight Prosciutto and Pesci. While he prioritizes defeating Prosciutto and his The Grateful Dead, Bucciarati soon learns that Pesci is not the weakling that he appears to be.

Prosciutto desperately clings onto the train

Bucciarati has grabbed Prosciutto and throws himself out of the express train in the hopes of killing Prosciutto too, shocking even the hardened Stand User. Prosciutto's screams wake Pesci up, who sees the open zipper and understands what has happened just as Prosciutto loses his grip. He immediately summons Beach Boy and launches the hook through the train, catching Prosciutto's right hand just in time to pull him toward the train and avoid a fatal collision against a pole. Moreover, the backlash almost makes Bucciarati drop Prosciutto and he barely manages to hang onto his foe's shoe. Finding himself with the advantage again, Prosciutto tries to kick Bucciarati off him but praises the lieutenant's determination.

Still aging, Bucciarati tries to attack with Sticky Fingers but Prosciutto manages to deflect the punch. However, Bucciarati has foreseen it and has been aiming for the line of Beach Boy, hitting it successfully. The damage rebounds into Prosciutto, on which a zipper opens, letting the hook out. Bucciarati grabs the hook while Prosciutto falls away.

Pesci notices a drop in the weight on the rod but then quickly senses that the hand on which the hook is in has changed and that his catch's weight doesn't match Prosciutto's. The sight of the passengers regaining their youth again confirms Pesci's worst fears and he collapses on the ground, crying in despair. Suddenly, the aging effect restarts. Bucciarati who has been on the roof trying to zip the hook out becomes weaker again and sees Prosciutto crushed inside the machinery of the train, maintaining The Grateful Dead despite his grievous wounds. Pesci too sees Prosciutto. Deeply inspired by his senior's example, Pesci steers his mind anew and breaks a passenger's neck in cold blood.

The sun is setting as the battle continues. Reading Bucciarati's movements flawlessly, Pesci sinks the hook deeper inside his arm and despite Bucciarati's zippers, manages to reach his foe again and again. Pesci pulls his catch sideways, threatening to make him crash against a metal pole but Bucciarati manages to grab the roof by one finger. When Pesci attempts to reel him upward, Bucciarati has no choice but to enter the wagon. Inside, Bucciarati notices that the hook is coming dangerously close to his heart and realizes that Pesci might have been the most dangerous of the duo. Steeling his resolve, Bucciarati separates himself in many tiny pieces by attacking the line. Distracted by the vibrations, Pesci cannot detect Bucciarati anymore but for his part, Bucciarati's life is now in grave danger since the drastic separation has stopped his ability to breathe.

Bucciarati dismembers himself in order to avoid detection

A tense waiting game during which Bucciarati wages his resolve against Pesci's ensues. He waits for Pesci to be tricked into sending the hook somewhere else while he suffocates. The assassin extends the line inside the room and almost senses Bucciarati's heart but the latter unzips it in half to escape detection. At the critical moment, Bucciarati loses consciousness but Pesci also loses his patience, hitting the control panels to stop the train and supposedly protect Prosciutto. The subsequent deceleration of the train stopping fortunately throws the pieces of Bucciarati together and he regains consciousness. When Pesci gets out of the train, Bucciarati confronts him one last time.

The two Stand Users approach in front of the agonizing Prosciutto but Pesci lands the first hit, surprising Bucciarati with his apparent resolve and tremendous fighting skill. Prosciutto wakes up and celebrates Pesci's growth, focusing his power again. Cornered, Bucciarati dashes in front of the line, hoping to guard it with his arm but Pesci ignores them and phases straight into his chest. Almost tearing Bucciarati's heart, Pesci is thwarted at the last moment when the lieutenant uses the line stuck in his arms and chokes Pesci with it, pulling so hard it breaks Pesci's neck. However, Pesci surprisingly lets Trish out of Coco Jumbo and threatens to crush the turtle against a rock in his fall. Disappointed, Bucciarati attacks faster than Pesci can fall. Shouting his battle cry "ARI ARI ARI... Arrivederci!", Bucciarati pummels Pesci and throws his zipped remains into a nearby river. The duo of assassins are dead.

The battle has ended and Giorno wakes up. Bucciarati notices that Prosciutto has called for reinforcement but more importantly, a mysterious claw print was imprinted in the ground beside Trish, indicating that she and by extension her father The Boss, are Stand Users.

Some time after the battle, Melone arrives at the battlefield to confirm Prosciutto and Pesci's demise and that Team Bucciarati has disappeared. Nonetheless, he is confident he can find them again as he takes a blood sample of Bucciarati.