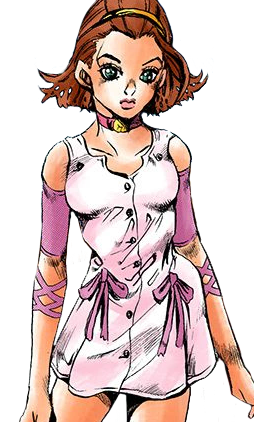 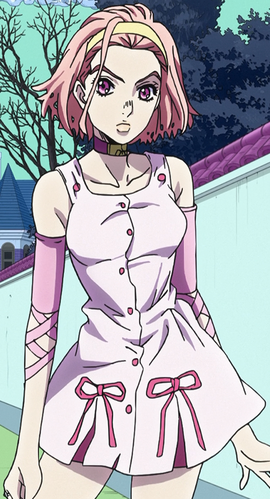 All Star Battle
“
If my killer is caught, Morioh will finally stop being the playground of this maniac and go back to normal. We must stop this monster as soon as we can!
”
—Reimi to Koichi and Rohan, Chapter 332: Rohan Kishibe's Adventure, Part 3

Reimi is a 16-year-old girl of average height and slight build, with sympathetic, youthful features and large, light eyes. She has chin-length light-colored hair, kept back with an Alice band

. Having slightly dark hair in the manga, Reimi is portrayed as being brown-haired in the colored version of the manga and pink-haired in the anime adaptation.

She wears a choker

and a short sleeveless dress with bows at the front. Bands at her upper arms taper in a crisscross pattern at the top of her forearms. She wears platform sandals

and pale nail polish.[2] Her outfit is generally portrayed as pink.

As a ghost, she has massive, perpetually fresh knife wounds on her back, as a remnant of her murder. These scars are not actually shown, with the impression that they are too horrific. She is invisible to those without Stands.

Reimi is composed, genial, and caring. She is firm in a voluntary responsibility to bring Kira to justice. Reimi is normally alone with her dog Arnold.

horoscope", a fortune-telling method where she asks Rohan to hold onto the other end of the pocky and then she sees how the pocky breaks. After teasing that he is self-centered and would get dumped by a girl, Rohan retorts with a psychological analysis that based on the color of her pale pink nail polish, she is "afraid of love" and liable to back out of relationships at the "critical stage", to which she responds with innocent concern.

Reimi survives as a Ghost, generally restricted to Ghost Girl's Alley in Morioh and the surrounding area.

Reimi Sugimoto was born and raised in Morioh. According to Heaven's Door, she lived in Kotodai neighborhood, Block 3, Section 12. She had her first period 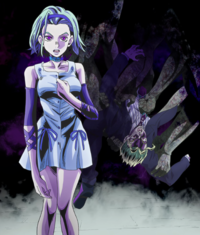 Reimi appears exactly like her original universe counterpart and has similar personality traits. She supposedly manifests at Nishi Akatsuki in Fukui Prefecture, which is the hometown of Jorge Joestar37. She and Cube House then moved to Morioh in 2004, waiting for George to reach there. At some point, Reimi was asked by someone to protect four Arrows. She accidentally stabs herself with them in 2007 and develops a Wound, transforming Cube House into Arrow Cross House.[5] Reimi could manipulate the house's walls and seal people beneath the building in a state between life and death for either her own safety or their protection.

However, Reimi loses her memories after becoming Arrow Cross House. When Rohan Kishibe purchases the house, he lets Reimi stay there, unknowing that she would not be able to leave the house anyway as she is a part of it. She becomes friends with Rohan, Koji Hirose, Muryotaisu Nijimura, and Fukashigi Nijimura. Later, she also becomes friends with Detective Jorge37 after Rohan enables him to see Stands with Heaven's Door.