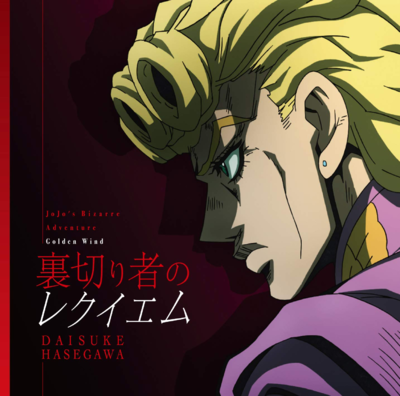 "Uragirimono no Requiem" (裏切り者のレクイエム, Uragirimono no Rekuiemu, lit. "Traitor's Requiem") is the second opening theme song of JoJo's Bizarre Adventure: Golden Wind and the ninth overall opening theme of the series' TV anime adaptation. It is performed by Daisuke Hasegawa, with lyrics by Shoko Fujibayashi and composition/arrangement by Yugo Kanno.

A version of the song with English lyrics is also available on the single, with lyrics translated by Karen Aoki. The single was released in Japan on March 27, 2019.[1] The English edition was made available for early streaming on March 15, 2019.[2] The two alternate versions of the opening used near the end of the season ("Uragirimono no Requiem Diavolo Ver." and "Uragirimono no Requiem Giorno Ver.") were released as part of the third volume of the Golden Wind OST. 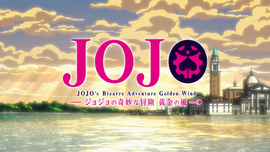 The animation opens on a shot of a closed window, followed by an underling kissing his master's hand and then scenery of Venice in which the title fades in as the sun begins shining through the clouds in the background.

The camera then rapidly zooms into the title, transitioning into many recollections of Giorno Giovanna and Team Bucciarati's journey thus far, beginning with Giorno standing in front of Polpo in his cell with his lighter and Black Sabbath besides him. The camera zooms into one of Polpo's paintings and features Leone Abbacchio and Moody Blues facing Mario Zucchero and Soft Machine. Then inside Abbacchio's eye, Guido Mista battles Sale and Kraft Work. The scene fades into the showdown between Narancia and Formaggio, then Pannacotta Fugo seeing Illuso and Man in the Mirror inside of a mirror, Pesci hooking Prosciutto as Bruno Bucciarati drags him out of a speeding train, Giorno fighting Baby Face and Melone, and Giorno again holding the wounded Mista with Ghiaccio in White Album at the foreground. The camera then focuses on Giorno's determined face as dawn breaks behind him.

The animation cuts to a scene of Bucciarati in the elevator with the level indicator translucent in the center of the frame and a zipper unzipping over Bucciarati to change him to a different color palette. Bucciarati's hand is shown holding Trish Una's as her own hand is severed off-screen, before cutting to Bucciarati's face twisted in anger as he lets out a scream of rage, as the camera fades into a wide shot of the San Giorgio Maggiore belfry seen from the clouds. We then see a leg shot of Team Bucciarati at the docks outside the church, each member walking toward the boat to openly rebel against Passione in the order of Giorno at the front, then Abbacchio, Mista, and Bucciarati. Narancia briefly hesitates before running after them, and Fugo takes a single step forward before stopping completely.

The Chapter 537 cover B reproduced in the opening

On top of an abstract 3D-rendered background, Bucciarati demonstrates Sticky Fingers' prowess, which then is replaced with Giorno posing with Gold Experience before Moody Blues transformed as Abbacchio's partner appears from the background, drawing a gun before getting shot as Abbacchio himself moves out from behind. Narancia enters and leads shot from Aerosmith before Mista appears to fire his gun, Sex Pistols riding the bullets then jumping off, and Trish summons her Stand Spice Girl, which begins to throw several punches towards the left. Trish's face then closes and centers to occupy the whole screen while turning before she falls away, revealing the whole team falling from the sky while posing.

Vinegar Doppio appears, seeing a vision of Risotto Nero in his hair created by Epitaph. He then hears a call from the Boss before getting a headache and covering his face in pain. The camera zooms back into him, and Doppio's face becomes worried yet entranced as the camera enters his eye to reveal a Sardinian beach turning upside down and fading into shadows.

Giorno's hand is shown bleeding drops of blood, the drops staining the ground until time is erased and more traces of blood suddenly appear. The Boss then appears, his entire body hidden in the shadows, who sends his King Crimson to attack Giorno, which obscures him from the audience's view. Giorno then turns around, seeing the Boss and his Stand, and summons his Gold Experience which launches a flurry of punches. An Arrow with a special beetle design is seen rotating in the sky, before the animation cuts to Giorno kneeling in the middle of a thick cloud, a determined look on his face. He lifts his arm to reveal said arrow and holds it high in the air while summoning Gold Experience, then dramatically pulls it in. The camera focuses on Giorno and Gold Experience's faces as they are engulfed in a bright golden light from below.

The arrow falls down into a red jewel, before several shots flash in rapid succession: the word "JoJo's" in front of a ladybug background, "Bizarre Adventure" framed in an elaborate oval frame with a checkered background, "Golden Wind" in a blue space filled with pink flowers. The opening animation ends on a zooming out shot of the show title in a blue and slightly cloudy sky.

From GW Episode 34 onwards, a second version of the opening is used.

Doppio's section is now laced by flashes of King Crimson, with Doppio actually transforming into Diavolo after getting his headache, his face looking determined before changing to fear at the last second.

This scene is immediately followed by the shot of blood dripping onto the floor, which is modified to show the time erasure and Diavolo positioning himself behind Giorno and summoning King Crimson. He then uses Epitaph to foresee the future shot of Gold Experience attacking him. As this plays out a voice speaks in Italian, saying:

The opening then plays like normal, except Diavolo is fully revealed (although he is still obscured by King Crimson) and the chorus is backed by a choir.

In GW Episode 37, this version plays with sound effects playing over moments such as Stand attacks, much like previous openings in the final episodes of their respective parts.

A third and final version of the opening is used starting from GW Episode 38.

It starts off the same as the Diavolo version, but the time erasure is cut short and reversed as the power of Gold Experience Requiem activates. The camera zooms into Diavolo's eye in a loop (a grand total of four times) before we see him staring at a never-ending line of different versions of himself. The blood reverses back into Giorno's hand before he does a pose similar to DIO's in Part 3 (when he was hidden by shadows), with a shadowy version of Gold Experience appearing behind him mid-transformation. The opening then reuses shots, but rearranges them to tell a different story. Giorno grabs the arrow and stabs his Stand. Diavolo sees Gold Experience collapsing and sends his Stand to kill Giorno, but the arrow travels up Gold Experience's arm and its skin shatters revealing the newly evolved Gold Experience Requiem which unleashes a barrage of attacks as Giorno looks on stoically.

In GW Episode 39, this version plays with sound effects playing over moments of Gold Experience Requiem's ability activating, as well as it forming and attacking.

(Ability only)
Man in the Mirror

Other languages:
English • português do Brasil
Retrieved from "https://jojowiki.com/index.php?title=Uragirimono_no_Requiem&oldid=771528"
Categories: