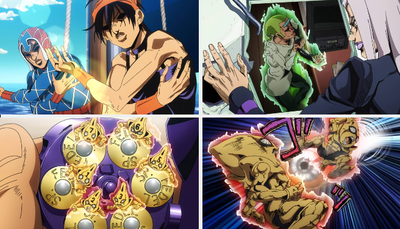 Sex Pistols Appears, Part 1 (セックス・ピストルズ登場 その①, Sekkusu Pisutoruzu Tōjō Sono 1)[1] is the seventh episode of Golden Wind and the one hundred twentieth episode of the JoJo's Bizarre Adventure anime. The episode covers from Chapter 462 to Chapter 464 of the original manga.

Mario Zucchero is defeated but he has contacted his ally who is standing guard in Capri. Giorno and the gunslinger Guido Mista are sent out to clear the way for the team.

In the aftermath of Mario Zucchero's attack and capture, everyone in Team Bucciarati has been returned to normal. While Narancia Ghirga, Pannacotta Fugo, and Leone Abbacchio vent their anger by kicking Zucchero's body, Guido Mista decides to torture him by hanging his zipped out head on a fishing line and setting up glasses threatening to focus the sun's rays into his eyes. Finally, Mista, Fugo, and Narancia engage in an extravagant dance.

However, Abbacchio turns Moody Blues into Zucchero from several minutes ago, discovering that Zucchero has radioed his partner Sale and informed him that the treasure lies in Capri. Bruno Bucciarati believes that Zucchero will keep silent as a hardened gangster and, having purposefully taken a detour, the group now expects to fight another unknown enemy on arrival. With the group desperate to figure out a solution to a potential ambush, the clouds overhead begin to cast a shadow on the boat. However, Giorno Giovanna proposes that he goes ahead to take the attacker by surprise, and rays of sunlight peek through the clouds over him. As he reaffirms the group of their goal, the boat moves from under the clouds back into the sunlight.

Giorno and Mista on Capri

Agreeing with the initiative, Guido Mista the gunslinger reveals his Stand, the six imp-like Sex Pistols, and accompanies him on a buoy turned into a fish, taking Zucchero's radio with them. On the island of Capri, Giorno observes the marina from afar while Mista has lunch. Giorno and Mista decide to use Zucchero's radio to call the radio room on the marina, indirectly calling for the enemy while Mista lies in ambush. However, the unseen Sale has already infiltrated the radio room to answer the call and sees Mista through a window, prompting Giorno to warn his partner through the same radio.

Mista draws his gun but his opponent closes the window shutters. Unfazed, Mista shoots twice through it, the Sex Pistols riding on the bullets. Using their power to kick the bullets to redirect them, the Sex Pistols manage to hit the enemy in the leg. Following the blood trail up to a truck starting to go away, Mista jumps to the passenger side of the cabin and prepares to shoot the driver. Arriving at the marina, Giorno hears a gunshot.