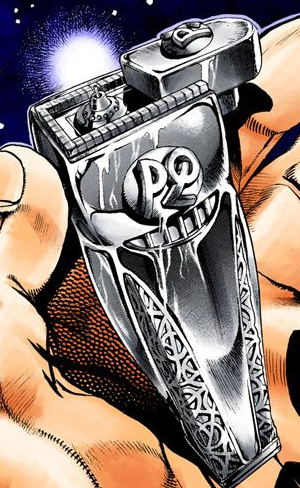 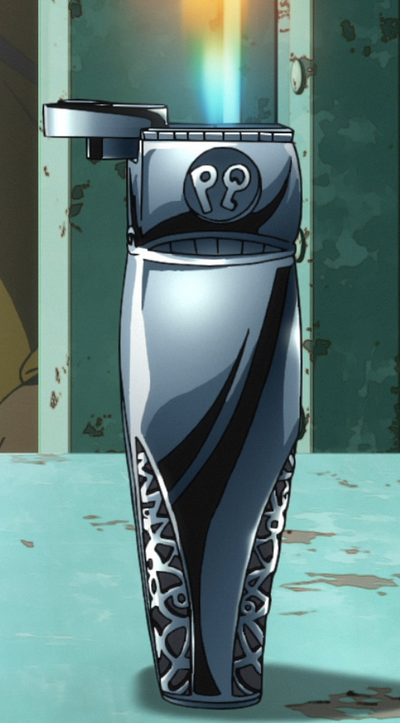 GW Episode 3
“
This test is abut measuring your trustworthiness... using this lighter's flame! Take it, and don't let the flame die.
”
—Polpo describing the lighter test to Giorno, Chapter 449: Meet the Gangster Behind the Wall, Part 2

Polpo's lighter (ポルポのライター, Porupo no Raitā) is a prominent item introduced in the fifth part of the JoJo's Bizarre Adventure series, Vento Aureo. The lighter acts as an important item in Passione, as the lighter and its subsequent tests are related to how one is able to join the organization.

The lighter is first seen in the series during Giorno's initiation into Passione. After his battle with Bruno Bucciarati, Giorno is directed to the Naples Prison, where Polpo is being held. Giorno passes through the tight security and is instructed by the guard searching for him not to accept anything from Polpo. Giorno thus enters the corridor leading to Polpo's cell instead of going to a visiting room. After meeting Polpo and holding some minor discussions, Polpo asks Giorno what the most important quality in a person is. After Giorno gives his thoughts, Polpo begins to chew on his own fingers. However, his finger suddenly heals, and Polpo reveals the lighter in question. Polpo gives Giorno the lit lighter and tells him to keep the flame from going out for 24 hours in order to join the gang. To do so will prove that Giorno can be trusted with a task even if no one is watching him. After Giorno leaves Polpo with the lighter, he attempts to conceal the lighter from the guards as they check his body to see if he accepted any items. Initially burning his hand to hide the lighter while being patted down, he uses Gold Experience's ability to transform the lighter into a flower, with the flame hidden in the petal bud, when the prison guard makes him open his hands. The guard ultimately allows Giorno to leave with the unassuming flower.[1]

After carefully bringing the lighter back to his middle school, avoiding several students and staff along the way, Giorno places the lighter within a loaf of bread to keep it still. He surrounds the lighter with several books as well to secure the flame. However, Koichi manages to find Giorno's dorm and attempts to break-in in order to get his passport back, forcing Giorno to hide outside the window. In an effort to keep Koichi from discovering and putting out the lighter, he transforms his ceiling light into a snake, which burns itself trying to grab the lighter. Luckily enough, Koichi actually finds his passport, allowing Giorno to swiftly steal the lighter and escape while he was distracted.[2]

After his encounter with Koichi, Giorno brings the lighter out into his school courtyard, where the flame is accidentally put out by the janitor. As Giorno tries to figure out what to do, the janitor relights the lighter for him, causing him to notice the oddity of the test, as he believes it is pointless to have a test of trust in which someone can relight the lighter without someone knowing. However, once the lighter is re-lit, the true nature of the lighter and its test are revealed. Polpo's Stand Black Sabbath appears. It attacks the janitor for having re-lit the lighter, testing him by pulling his soul out of his body, and stabbing his soul with the Stand Arrow. As the janitor was unworthy of possessing a Stand, he perishes without injury. Afterward, it turns its attention to Giorno for having seen the lighter be re-lit, and a battle ensues between Giorno, Black Sabbath, and eventually Koichi.[3]

After Giorno's victory and the defeat of Black Sabbath, Giorno returns to the prison with the lighter. After returning the relit lighter, Polpo accepts Giorno into Passione, wondering to himself if Giorno gained a Stand from Black Sabbath, but he believes that no matter what he will be a good tool for Passione. After Polpo's murder by Giorno, the whereabouts of the lighter are not mentioned, and whether it still exists after the destruction of the Black Sabbath is unknown.[4]

Polpo's lighter itself has similar functionality to most lighters, as it is able to produce a flame from the ignition of the fuel inside. Unlike most standard lighters though, the lighter is able to stay lit for an extremely long time, without the user holding down a button or switch that releases gas. The user does need to ignite the fuel with the manual striker, but the lighter seems to constantly release the fuel (since after its reignition by the janitor, it created a large flame from a large amount of gas being released after it was put out).[1]

It is equally likely that the lighter is actually a part of Black Sabbath, and that it is an item that came into existence along with the Stand to act as its trigger for activation. This is primarily due to the fact that the lighter only showed up after Polpo chewed on his fingers, which could be an indication of the lighter being summoned by Polpo.[3]

Owners of the Lighter