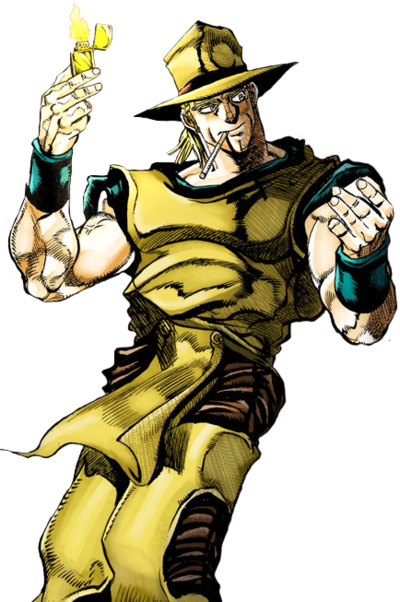 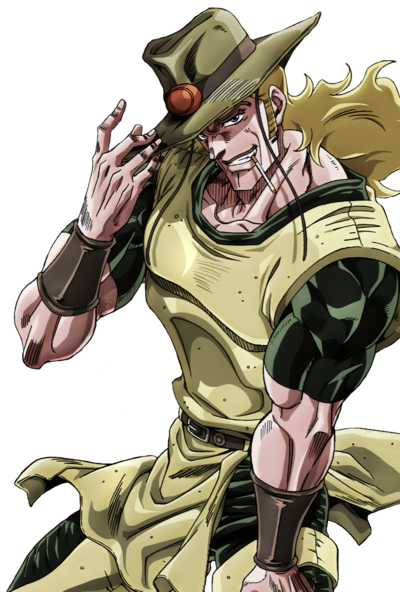 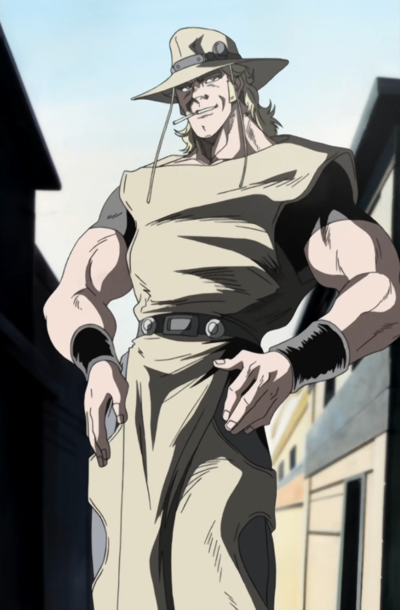 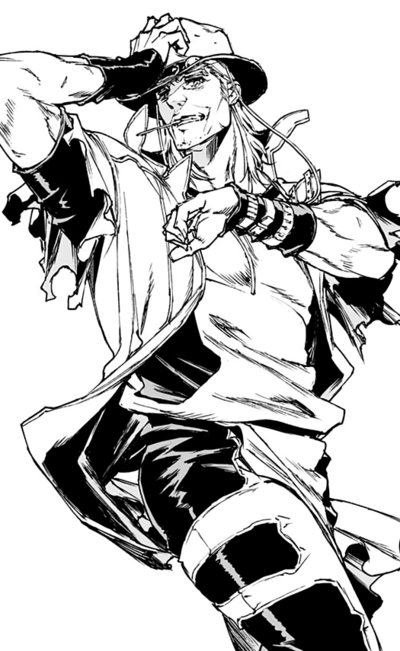 JoJo's Bizarre Adventure (SFC Game)
Heritage for the Future (Playable)
“
I'm the type who only shines when he's teamed up with someone else! Why be number one when you can be number two? That's the Hol Horse way of life!
”
—Hol Horse, Chapter 146: Empress, Part 1

Hol Horse (ホル・ホース, Horu Hōsu) is a secondary antagonist featured in the third part of the JoJo's Bizarre Adventure series, Stardust Crusaders. He is introduced during the "Emperor and Hanged Man" story arc and returns in other arcs afterward, having a focal role in the "Hol Horse and Boingo" arc.

Hol Horse is a hitman hired by DIO who works together with his partner, J. Geil, to eliminate the Joestar Group. Wielding the gun Stand, Emperor, Hol Horse is capable of shooting his foes with bullets that he can control.

Hol Horse reappears in the spin-off manga Crazy Diamond's Demonic Heartbreak as the protagonist. Set in 1999, ten years after the events of Stardust Crusaders, Hol Horse pursues a parrot for an old woman by travelling to Morioh. 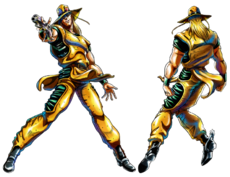 Hol Horse is a tall man with an athletic build. He has light shoulder-length hair and long sideburns. He also has dimples in his cheeks and a cleft chin.

Hol Horse mostly wears light-colored clothes with a dark undershirt and a wide-brimmed cowboy hat that has two long, thin, loose straps hanging down. He wears wristbands and a long sleeveless top with the sides split, extending below his waist in a rectangular shape on the front and back. Under his left arm's wristband, he wears a steel watch with roman numerals.[5]

Like typical Western cowboys, Hol Horse has chaps on top of his pants and wears riding boots which have spurs attached.

In the spin-off Crazy Diamond's Demonic Heartbreak, Hol Horse wears a tattered coat in addition to his usual attire. Moreover, he's replaced his old wristwatch and now wears three watches on his wrist.

Hol Horse is portrayed like a Western gunfighter, appearing to be bold and a womanizer. In contrast, his fearfulness manifests itself when he is under pressure. He is a sharp-witted deceiver and prime opportunist, tending to rely on others as well as luck to save himself.

Hol Horse attempts to shoot DIO, making him the only agent brave enough to do so

Hol Horse adheres to the belief of there being a hierarchy between people as well as their weapons. While fighting Polnareff and Avdol, he compares the battle to Japanese military chess.[3] Furthermore, his motto is that the best way for him to live is to be "Number Two" rather than "Number One".[6] Consequently, he prefers having a partner to fight with him even if his partner is a timid child like Boingo.[7] According to Polnareff, Hol Horse has a talent for picking his allies.[8]

His resolve and confidence frequently shifts depending on his current situation. For example, he boasts to Polnareff that Emperor can beat Silver Chariot because swords don't stand a chance against guns.[3] He displays his pride when he is ridiculed, such as when he attempts to shoot Enya the Hag[9] and later against DIO. Hol Horse manages to convince himself that perhaps DIO isn't much stronger than he is, and assumes he would have a better chance against one person than four men at the same time. Despite his fear, he is capable of calming himself down and bravely attempts to assassinate the vampire. Although he fails, DIO praises his determination, as he had steady breathing and wasn't even sweating, deeming him worthy enough to prevail against the Joestar group.[10] He desperately tries to follow Tohth's predictions as long as he could win, declaring that he would even eat crap if the comic said he would.[5] With ordinary civilians, Hol Horse doesn't hesitate to threaten or harm them to get what he wants. For example, he shoots off a man's ear at the airport when the man pushes Hol Horse out of the way to get into a taxi before him.[7] He also intimidates two plumbers to open a pipe for him by almost smashing a concrete block onto their heads.[5]

Hol Horse's awareness of his own shortcomings allows him to survive. After J. Geil is killed and the Joestar group is aware of Hol Horse's ability to change the path of his bullets, he realizes that he has no chance to defeat them by himself and sacrifices his pride to flee. When Nena jumps onto Polnareff to protect Hol Horse, he grabs the chance to escape on horseback alone.[4] He lies to Enya about being best friends with J. Geil as an attempt to comfort her.[9] However, when Enya turns against Hol Horse and almost makes him shoot himself, his quick thinking allows him to call off Emperor so that the bullet doesn't pierce through his mouth. Due to Enya's betrayal, Hol Horse helps Polnareff and Jotaro by informing them of Enya's ability.[11][12] In spite of momentarily switching sides, he takes the opportunity afterward to steal the Joestar group's jeep and escape alone.[13] Later, he kidnaps Boingo to use Tohth to predict the future, thinking it would be his final chance to help him win.[7] In the end, his luck saves him once again from dying, as his bullets would have killed him if they were one centimeter lower.[14]

Hol Horse describes himself as a nomad who lives life day by day.[4] Although he is one of DIO's agents, Hol Horse isn't completely loyal to DIO until after he witnesses the vampire's power for himself.[10] He is primarily motivated by money for carrying out his assassinations. He was paid a wealthy sum to handle the Joestar group[3] and Rubber Soul had also stated that there would be a $100,000 reward for managing to defeat them.[15] The prospect of being able to have all of DIO's treasures for himself acted as an incentive for him wanting to betray DIO.[10]

Hol Horse exploits his girlfriends all over the world

Hol Horse has a knack for smooth-talking women, professing to be a "gentleman" that has girlfriends from all over the world.[7] However, he discloses to J. Geil that he is just using his girlfriends as they are willing to do anything for him, including going as far as sacrificing their lives for him. Despite charming several women, he also claims that he's destined to die alone.[4] Hol Horse admits that although he tells lies to women, he would never attack them because he respects all ladies, disregarding whether they're beautiful or ugly.[7] Nonetheless, Hol Horse threatens to shoot Enya out of self-defense, so it is possible he would go against his moral standards if it is to protect himself.[9] He fervently denies that Tohth's prediction of him kicking a lady from behind would happen, but it actually comes true when Hol Horse impulsively kicks her to save her from a deadly scorpion, proving that he cares to save women.

Since Hirohiko Araki could no longer stand cigarette smoke, he decided to have Hol Horse use a smoke-free pipe instead as of Chapter 218, claiming that Hol Horse is the kind of guy to change his mind all the time anyways.[16]

As a hitman, Hol Horse is desensitized to seeing deaths. He tells Polnareff that from his own experience, there's no use worrying over it as most people aren't able to say goodbye.[17]

In the spin-off Crazy Diamond's Demonic Heartbreak, Hol Horse is still deeply marked by his time with DIO. Hol Horse acknowledges that after he gave in to his fear of the vampire, he lost spiritually and is still afraid of DIO ten years after DIO's death. At one point, Hol Horse even has a panic attack when he is reminded of DIO. However, Hol Horse tries to appear as if he's moved on from DIO, playing up his tough guy persona. Moreover, Hol Horse has developed a superstition around having his wristwatches being on time, keeping three wristwatches on him at all times and lamenting that having a wristwatch off can bring enough bad luck to kill a man, referencing his own experience during the "Hol Horse and Boingo" story arc.[18] Hol Horse has somewhat grown during the gap between 1989 and 1999. Even though he's embroiled in several stressful situations such as confronting the memory of a helicopter trying to shoot him, Hol Horse shows that he's gathered some courage over the years and manages to regather himself to help Josuke solve the situation, stating that the current fear he feels is nothing compared to the terror he felt with DIO. Plus, Hol Horse now shows a degree of benevolence when he considers that the parrot Petsounds he promised to search is a menace to society and decides to break his promise and shoot Petsounds to get rid of the parrot.[19]

Hol Horse's Stand is Emperor, a handgun that Hol Horse can directly summon in his hand.

It is capable of firing bullets whose trajectory Hol Horse can control to a fine degree. He can even juggle the gun around with expertise.[20]

Hol Horse partners with J. Geil of the Stand Hanged Man, and later Boingo of the Stand Tohth, who both complement his abilities well. He says that he prefers to operate with a partner.

Darts: In the spin-off Crazy Diamond's Demonic Heartbreak, it is shown that Hol Horse can throw darts with extreme precision. He is shown throwing several darts at a dart board and managing to hit the center of the board with all his darts.[21] 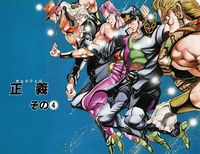 Araki's idea for Hol Horse might have been influenced by the titular character in the manga, Cobra; a gun slinging outlaw who always smokes and has the power to fire projectiles without having a line-of-sight.[22]

Though not initially planned, Araki threw around the idea of Hol Horse joining the protagonists (much like how Polnareff and Kakyoin did as former antagonists) during their journey, but opted out due to balance issues with Polnareff's similar character. Araki mentions this is part of the reason Hol Horse shows up multiple times throughout the story and why there is at least one group shot with Hol Horse present.[22]