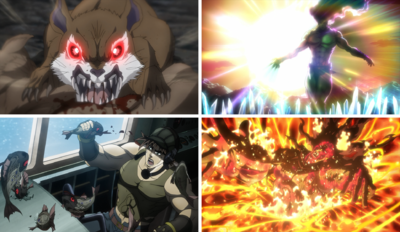 "The Birth of a Superbeing"

The Birth of a Superbeing!! (超生物の誕生!!, Chō Seibutsu no Tanjō!!)[1] is the twenty-fifth episode of the JoJo's Bizarre Adventure anime. It is also the sixteenth episode of Battle Tendency. It covers Chapter 109 through most of Chapter 111 of the manga.

Kars has managed to become the Ultimate Being, gifted with immortality and the ability to draw on nature's designs to modify his body. As the heroes feel despair over how they can defeat Kars now, Joseph has a plan.

Kars has outsmarted Stroheim and, combining the Stone Mask and the Red Stone of Aja, has finally managed to become the Ultimate Being.

Kars, now the Ultimate Being, unaffected by sunlight

It is dawn and although Kars does not appear to have changed much, he takes everyone by surprise when he turns his hand into a squirrel. Said squirrel then decimates the Nazis and opens a hole in Stroheim's metal stomach before returning to its owner. The sun rises, killing the rest of the vampire minions, but Kars remains standing, immune thanks to the power of the stone. Kars's triumph is undeniable and the entire planet is seemingly doomed.

With the odds once again against him, Joseph has nonetheless a plan in mind: he grabs the stone and runs off with Smokey to lure Kars away from the others whilst thinking of a real plan. Eager to celebrate his apotheosis by killing the greatest thorn on his side thus far, Kars follows JoJo by growing wings and flying toward him. Leaving Smokey behind before he can tell him about Lisa Lisa, Joseph boards a plane to lure Kars away further.

The Ultimate Being melts into the lava

On board, Joseph theorizes he may be able to beat Kars if he drops him into a volcano and heads towards a volcanic island of Italy. As Speedwagon attempts to stop Joseph by telling him about Lisa Lisa, the feathers that Kars had launched on JoJo's plane turn into piranhas, and octopus tentacles entangle themselves on the propellers, making the engines explode. As the plane starts to dive into the island, Joseph seemingly jumps down on a parachute. However, Kars approaches and sees too late that the parachute is a dummy; in reality, Joseph is still piloting the plane and is crashing it into Kars. The Ultimate Being attempts to escape, but Stroheim appears inside the plane and stops him. The cyborg rescues Joseph once the plane explodes by sacrificing his own robotic legs when they hit the ground. The volcano begins to erupt, and Kars is flung into the lava and begins to melt.

“
The series' director Kenichi Suzuki was in charge of the storyboard and the direction. It was an arduous episode, but he made it through.

We'll take note of our shaky plane, which does make you really feel the urgency of the situation. It's a 3D model and Suzuki had coincidentally debuted in 3D animation. He's had the model corrected to no end, and Yasufumi Soejima was no doubt exhausted from the ordeal (laughs). I think you really get the feel of this new Kars' "perfection". The squirrel alone is a highlight in itself. We even changed our staff for it: it's one of our female animators who personally took care of animating it until it became ferocious, then Masahiko Komino takes over to draw the violent beast. I appreciate a lot Smokey's line : "In fact, it looks rather cute." This small moment of relief in the middle of the tension... you really see how Hirohiko Araki plays with horror tension.

Suzuki gathered all his strength to show us a magnificent Kars. The perfect being. I would love it if the explanation chart was commercialized. For instance, what do you think about a table-mat stamped with "Sex: useless" (laughs)?
”
—Naokatsu Tsuda, Blu-Ray limited edition commentaries

Other languages:
English • português do Brasil
Retrieved from "https://jojowiki.com/index.php?title=Episode_25&oldid=659421"
Category: