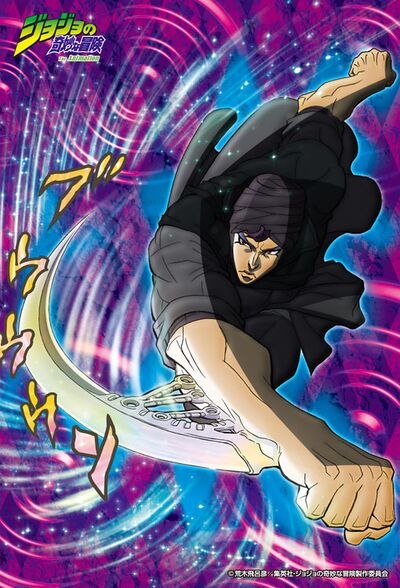 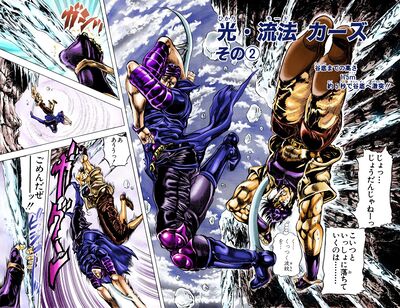 It narrates the struggle between Joseph and Kars, both trying to seize the Red Stone of Aja as it slips toward a cliff. 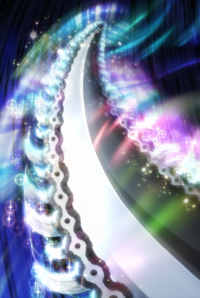 Kars has now the disabled Stroheim at his mercy. As Joseph ponders on whatever he should fight or run after seeing Stroheim defeated and Kars's Light Mode which he doesn't see a counter of, the Pillar proceeds to take the Red Stone of Aja from the cyborg. Still defiant, Stroheim retaliates with a UV laser fired from his right bionic eye. Surprised, Kars drops the Aja Stone. The pendant begins to slide down the snowy slope towards a cliff. Caesar, Lisa Lisa and Messina arrive in time to witness Joseph and Kars begin to race toward the cliff. Because Kars doesn't fear jumping down the cliff, his pace is faster and he reaches the Red Stone first. Joseph launches a kick, which Kars has predicted and evades, grabbing the pendant's chain with his shoe. However, Joseph merely aimed at the snow and kicked it to both send snow into Kars's eye and brake himself. Kars instinctively protects his eye and Joseph manages to grab the Stone. However, a blade sprouts from the Pillar Man's leg and hooks Joseph. The two men then begin to fall down the ravine.[1]

Joseph attempts to use his Ripple to grab an icicle, but Kars, still hooked to Joseph's, struggles so much that the icicle Joseph is grabbing breaks with several other icicles. Both continue their 175 meter death plunge. When Joseph attempts to send a Ripple to Kars, the Pillar Man kicks knocks him into a wall, using the rebound to send the human back at him to slice off. But Joseph uses the Super Aja as a shield, kicks Kars away, and uses his Ripple to connect the falling icicles and form a makeshift rope, with Caesar instinctively forming the other end and connecting his own icicle to Joseph's, saving him. The battle is a victory for the Ripple users.

At the bottom of the ravine, rebounding himself to avoid landing on a flower, Kars acknowledge Joseph's ability and his defeat. Laughing manically, the Pillar Man declares that he'll let him keep the Stone for the time being before taking his leave.[2]