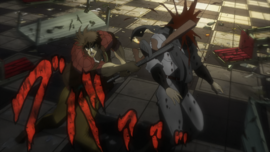 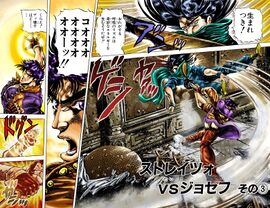 It narrates the clash between Straizo, who has transformed into a Vampire, and the cunning Joseph in the streets of New York.

In Mexico, one night before seeing the man in the pillar, Straizo studies Speedwagon's notes about the man, discovering that he comes from superior species whose goal is to "befriend the sun." Speedwagon asks Straizo if he's gone mad, but Straizo admits that despite the use of the Ripple slowing his aging, he envies the youth and vigor DIO gained from the Stone Mask. The monk then adorns a mask, using the spilled blood to activate it while explaining his intent to eliminate all loose ends starting with Speedwagon and then the Joestars.

Joseph and Erina are shocked to learn that Straizo has killed Speedwagon. While Smokey advises Joseph to not trust the mobster's words, Joseph explains there is some truth in it. However, Joseph knocks the mobster out for inconsiderately distressing his grandmother with such news. With Erina concerned that the evil that took away her beloved Jonathan is about to claim her grandson. Joseph assures her that he is not going anywhere while accepting whatever fate is in store for him.

Later, Joseph and Smokey are eating out at a diner after sunset with the former excited of an advertisement covering women's bras. As Smokey tells him not to believe that "snake oil", Joseph notices a figure watching him from outside and leaves the bar to inspect him. The figure is none other but a vampirized Straizo as he declares his intentions to kill Joseph here and now before he becomes a threat. But Joseph, having expected Straizo, takes out a concealed Tommy-Gun and blasts Straizo through the bar's window to everyone's shock. Smokey yells at Joseph that he killed a man, with Joseph hoping that was the case. But Straizo gets back up with his wounds healed, confirming that he is not human anymore.

Straizo proceeds to use the same high pressurized eye attack Dio used against Jonathan to shoot Joseph on the head and neck, only to learn that he's only hit a reflection as the real Joseph manages to strike Straizo's face with the Ripple. Although Straizo uses his scarf to negate the attack, Joseph sneaks numerous grenades on Straizo's person, which explode and dismember the vampire. When Straizo's body parts begin to reassemble, Joseph tells Smokey that his opponent's legs have not fully healed so he has the advantage with his last resort technique: running away. Once fully regenerated, the naked Straizo takes a reporter hostage as he catches up to Joseph on the Brooklyn Bridge.

Straizo threatens to kill the girl if Joseph runs again, explaining that he is testing the Joestar's character to deem if he is truly a threat or not. Joseph nonchalantly rejects the threat, mentioning that he doesn't even know that woman so he shouldn't care what becomes of her. But when Straizo rips a tooth out of the girl's mouth, Joseph loses his temper and commences a showdown with Straizo on top of the bridge. Anticipating that Straizo will blast him with his eyes, he uses Ripple-infused shot glasses to redirect the attack before knocking Straizo off the bridge with a punch to the face. But Joseph catches him, demanding answers concerning Speedwagon's death. Straizo reveals the existence of the "Pillar Man" that he and Speedwagon found, dumping the bodies into the river to keep the being from revived by the blood. Straizo tells Joseph that he will cross paths with the Pillar Man soon and will know the meaning of evolution. Straizo then releases the Ripple stored in his body, revealing he has no regrets for his actions and prefers going to hell in his prime. Straizo explodes and Joseph cries out in distress.

Meanwhile, at a hacienda in Mexico, a German soldier named Rudol von Stroheim is harassing one of his female attendants for accidentally cutting him during a shave when a subordinate alerts him that the man they retrieved from the river is coming to. The man is revealed to be Speedwagon, who Stroheim wants answers from concerning the Stone Masks and the Pillar Man for the sake of the Third Reich.

In New York, after a comedic moment with the upset reporter, Joseph decides to find the answers he seeks in Mexico.