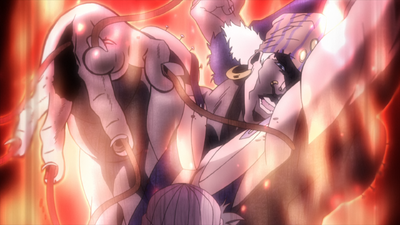 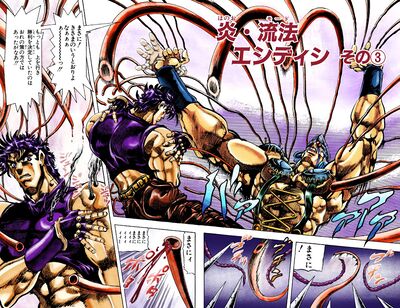 It narrates the battle between Joseph, now a proficient Ripple User, and the devious Esidisi whose blood is hot enough to set things on fire.

Having been searching for the Super Aja for Kars, Esidisi has learned of its whereabouts in Venice and has come to Air Supplena Island to take it from Lisa Lisa. But Joseph Joestar stands in the Pillar Man's way after he killed Loggins, intending to get Esidisi's antidote by fighting him on the arena, a field covered in sharp spikes. While Joseph uses the Ripple on his feet to resist the spikes, Esidisi nonchalantly walks on them, ignoring his impaled feet. A first clash occurs, and while Joseph's Ripple has developed to the point his finger can now pierce through the Pillar Man's hand, Esidisi grabs Joseph's wrist and proceeds to twist it. Joseph flips over his foe to escape the grab and also cuts off Esidisi's arm, quoting Sun Tzu's Art of War as he destroys the arm while taunting Esidisi that already planned his whole trick before the fight.[1]

However, Joseph is caught off guard when Esidisi starts to cry uncontrollably before abruptly stopping soon after explaining he was calming himself down to keep himself from losing it. The Pillar Man then explains that he's familiar with Joseph's method of emotionally destabilizing his opponent, revealing that he also has in-depth knowledge of the Art of War. With that, Esidisi takes an arm from Loggins's corpse and grafts in onto himself. Esidisi then reveals his ability to make his blood boil up to 500 degrees Celsius, and destroys the rest of Loggins's body as a display of his power. Nervous, Joseph uses a direct attack against Esidisi who effortlessly evades it and notes Joseph's vulnerability.[2] At the same time, Caesar Anthonio Zeppeli passes his test. He and Messina notice Joseph's fight with the Pillar Man but unable to reach him, are reduced to observe the battle with a pair of binoculars.

Joseph realizes that Esidisi is psyching him out with his methods as he covertly lays string around the spikes to tie him by surprise and send the Ripple through them into Esidisi.[3] While Esidisi appears to see through Joseph's plan and cuts part of the string with his blood vessel tendrils, Joseph laughs at his apparent defeat as he reveals that he won. Joseph explains that as Esidisi was resting at the time, he was ignorant of the sleight of hand trickery developed in the 1800s. Joseph then reveals a second set of strings tied with the first and laid behind the overconfident Esidisi has failed to expect. Joseph uses it to deal a deathblow that causes the Pillar Man to violently explode despite a last ditch attempt to kill him.< His breathing mask destroyed during the fight, Joseph picks up Esidisi's nose ring and ingests the antidote. Joseph makes his way to Lisa Lisa's villa as the sun rises, unaware of a disembodied brain latching on his back.[4]