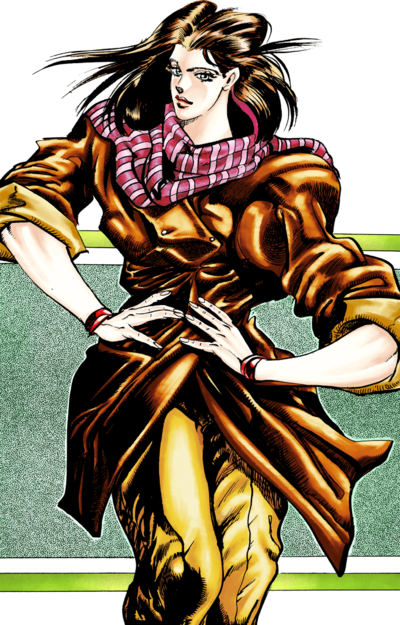 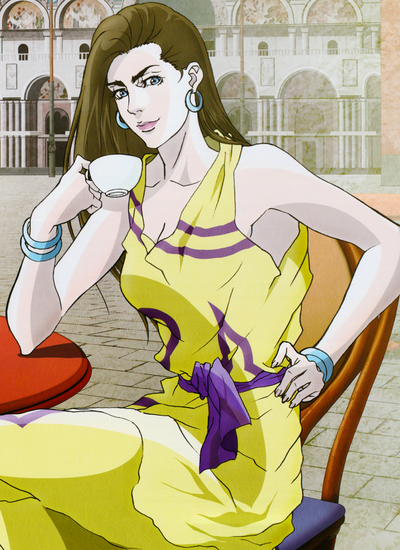 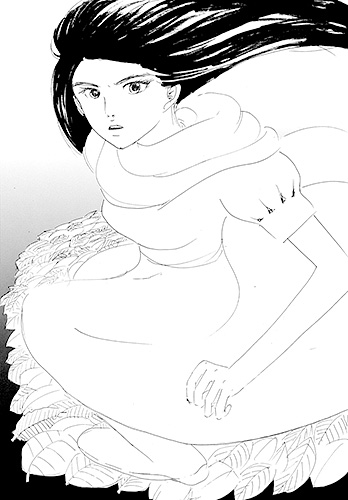 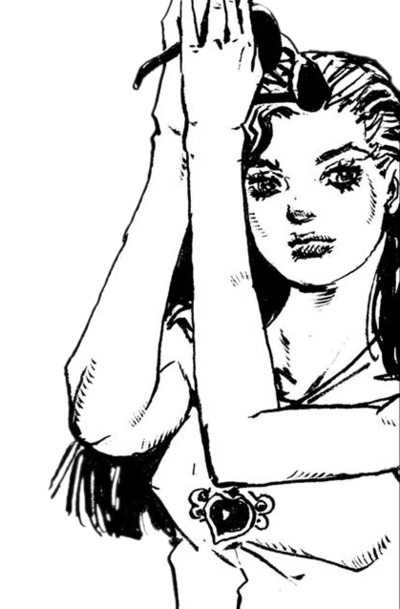 Head of the Speedwagon Foundation's Paranormal Phenomena Section (Novel Only)[2]

Heritage for the Future (Cameo)
All-Star Battle (Playable)
SPOILER WARNING: Part 2 spoiler details may follow.
“
I'm not teaching you the Ripple to save your life. I'm teaching you to become warriors that can defeat the Pillar Men... that's all.
”
—Lisa Lisa to her students, Ripple Teacher Lisa Lisa, Part 2
For a similar character, see Elizabeth Joestar (JoJolion)

Lisa Lisa is a Ripple master and mentor to Caesar Zeppeli and Joseph Joestar, residing in Venice but whose past is initially unknown. She leads the Ripple Users' efforts in battling the Pillar Men. Later, it is revealed that she is Joseph's mother.

She is also a primary ally in the light novels JORGE JOESTAR and rey infinito.

Lisa Lisa is a tall and fit woman. Beautiful and poised, she has light eyes and long, dark hair. Lisa Lisa's real age is 50, but her Ripple training has allowed her to appear as though she were still in her late 20s.

Her most known clothes were worn during the last fight with Kars. She wears earrings, a dark strapless dress with shorted-skirt, black pantyhose, a pair of high heels and a long, Ripple-conducting scarf. Occasionally she also wears a pair of aviator sunglasses.

The information below derives from rey infinito which was not written by Araki. As such, it may not be considered canon.

In 1973, Lisa Lisa has long silver hair and continues wearing her scarf and high heels. At some point, she stopped concerning herself with upkeeping her appearance with the Ripple's anti-aging effects. However, she still aged naturally and beautifully according to J.D. Hernández.[2]

Lisa Lisa is like any Ripple Master, a dignified and courageous woman, facing the Pillar Men without fear, and confidently confronts any challenge she encounters, especially in regards to fighting someone. Lisa Lisa takes some pride in her fighting ability, and tells Joseph that she doesn't need a youngster like him to win.[3] Lisa Lisa is constantly portrayed as a brave woman, being able to bluff Kars into sparing her and Joseph when they are surrounded by vampires without letting any emotion transpire,[4] and in the past, immediately killed the zombie who murdered her husband George II, forcing her to hide in Europe.[5]

"Climb the pillar with just your hands, that's the only exit. If you can't climb out then you'll stay here until you die."

As the master of Caesar and Joseph, she skillfully employs harsh and apparently life-threatening training for her students, and is severe to Joseph, whose antics she doesn't tolerate during his training.[6][7] Being the de facto leader of the Ripple Users, she is an authoritative leader and reminds everyone that their emotions are secondary to their goal of defeating the Pillar Men. After Caesar's death, Lisa Lisa tries to maintain an insensitive facade, telling Joseph to immediately focus on the fight. However, Joseph points out her loss of composure, upon which she breaks down in tears, illustrating her deep feelings for Caesar as a student and comrade.[8]

Otherwise Lisa Lisa behaves like a normal if elegant woman. She managed to begin another life after her battle against the Pillar Men threat, notably marrying again and coming to live in the United States.[9]

Illustrating her talent and skill, she first appears standing on an oar on a surface of water, turning it into a high bar on charged pillars of water. It is mentioned during the events of the chariot arc that her Ripple is at least three times more powerful than Joseph's.[1] Her ability for training others results in Caesar and Joseph's rapid growth into Ripple masters in their own rights.

Constant exercising of the Ripple can slow one's aging process, as Ripple breathing imbues the user with life force. However, aging isn't completely stopped. As such, Joseph thinks that Lisa Lisa appears to be in her late twenties despite being fifty years old.

A Ripple user is able to use the Ripple as a repellent and to adhere either themselves or objects to other objects and liquids. As per Lisa Lisa's training, Joseph and Caesar manage to climb a pillar covered in oil with adhesion, and Caesar uses it to deflect a high pressured oil jet.
Ripple Hypnosis

Lisa Lisa can hypnotize people and animals by using the Ripple on them. The process involves touching one's head with her hands. She can extract forgotten memories using this technique, which she uses on Suzi Q to determine the location of the Red Stone of Aja.
Satiporoja Beetle Cloth(サティポロジアビートルの布 Satiporojia Bītoru no Nuno)

Debut: Chapter 94: Climb Out of the Fortified Hotel / Episode 21: The Hundred vs. Two Strategy

A Ripple Master can use cloth woven from the dried intestinal fibers of Satiporoja beetles, an insect native to Southeast Asia. The cloth is capable of conducting the Ripple at 100%. Straizo and Lisa Lisa use scarves that are made of 30,000 beetles. As it conducts and disperses the Ripple far better than the human body, it acts similarly to a lightning rod and can completely absorb an opponent's Ripple attack.
Snake Muffler( Sunekku Mafurā, lit. Snake Neck Standing Belt)

Debut: Chapter 105: The Bond That Binds Lisa Lisa and JoJo, Part 1 / Episode 23: The Warrior Returns to the Wind

Lisa Lisa's primary method of fighting involves a scarf made with the yarn of the Satiporoja beetle (サティポロジアビートル, Satiporojia Bītoru), which can conduct the Ripple at 100%. She can channel her Ripple through her scarf to stand upside down, leaving the now rigid scarf the only part of her in contact with the ground. She may also use the sensitivity of the scarf to detect life signs and know the direction of incoming attacks, even when out of sight.
Ripple Detector(波紋探知機 Hamon Tanchiki)

Debut: Chapter 105: The Bond That Binds Lisa Lisa and JoJo, Part 1 / Episode 23: The Warrior Returns to the Wind
The user imbues a contained liquid or object with the Ripple. The Ripple will pass through the holder's body and the environment, enabling the holder to sense their surroundings and detect others even through walls. Lisa Lisa uses it with her scarf, sensing a zombie's sneak attack. 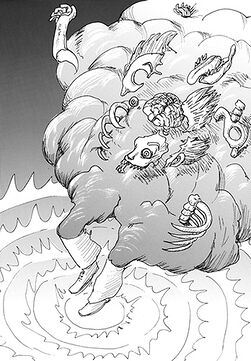 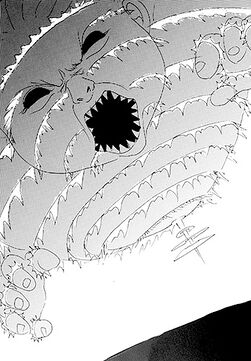 Lisa Lisa holds the Red Stone of Aja in one hand and presses it against the opponent before charging it with the Ripple. Her Ripple resembles the color of sunset and creates a red firework, burning the enemy.
Thousand-Color Overdrive( Sauzando Karā Ōbādoraibu, lit. Thousand Colors Ripple Dash)

Debut: rey infinito Chapter 1
Lisa Lisa creates a massive electrified dome by imbuing the Ripple on leaves, flowers, and dyed sawdust from destroyed rugs. The materials pile on top of each other in layers to cover an entire plaza from El Señor de las Moscas's swarm of flies.

For the second part of JoJo's Bizarre Adventure, Hirohiko Araki decided to have a female character play the part of the Ripple master. He wondered what it would be like for a female to follow up the Ripple master Will Anthonio Zeppeli from Phantom Blood. There also weren't "too many female characters" in the series at the time. Araki also thinks Lisa Lisa works well when paired with Joseph and Caesar.[10]

Araki mentions that the first obstacle in designing Lisa Lisa was her name, saying, "Back then, if you picked a non-Japanese name for your character, it was a challenge to get the audience to remember it." Thus, "Lisa Lisa" was chosen. Araki believes that a repetitious name like "JoJo" would help, and that it phonetically resembles Japanese to some extent.[10]

At the time of Battle Tendency's serialization, the females in other shonen manga were depicted as "a man's ideal girl": cute types who would giggle during conversations. Because of this, Araki felt that a warrior-type female like Lisa Lisa felt fresh. Lisa Lisa's personality was inspired by an incredibly smart girl in Araki's neighborhood who tutored him when he was in elementary school, since he felt intimidated by her.[10] He also personally admits that he's fond of female characters who are capable of fighting for themselves. He commented on his intents to have Lisa Lisa portrayed with "uncommon realism" for women in shonen comics, but he was held back from going as far as he would have liked with her.[11]

Finally, Araki states that in addition to functioning as a master people weren't used to seeing a woman fight. In battles, the one who is physically stronger would win, but Araki realized that if supernatural abilities were involved a woman can fight evenly with a strong male. "In other words," Araki says, "if the battle is between those with supernatural powers, physical appearance has nothing to do with strength."[10] 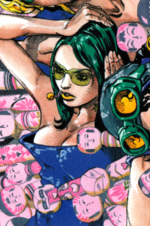