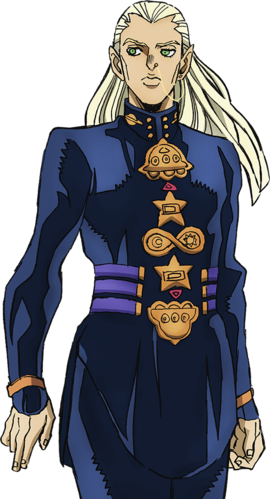 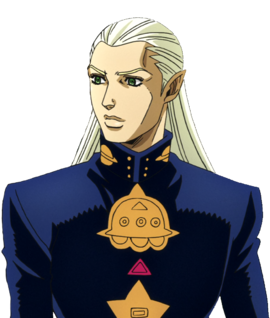 With Stand-like powers, Mikitaka professes to be of extraterrestrial origin; a claim of which the validity is never fully examined. His shapeshifting ability is named Earth Wind and Fire.

Mikitaka appears as a teenage boy of average to above-average height and slim to average build. He has pointed ears, and long, straight light hair flowing back over his head. He is introduced wearing a nose chain, which is missing in later chapters.

He decorates a dark, modified school uniform with various astronomical and alien-themed symbols, including ringed planets either side of his collar, and in a column on his torso two flying saucers

, two stars, and an infinity symbol (∞) with a crescent moon and sun in either loop.

, Mikitaka claims to be a 216-year-old extraterrestrial

. He exhibits great curiosity in human culture, though does not seem to understand it. Unafraid when offered a handkerchief, he eats it. He proclaims himself a peaceful individual, claiming to have left his weapons in his space shuttle as he did not come to fight and is stated to be a self-proclaimed animal lover, even owning a pet mouse. He is nonetheless shown to be irritated when Okuyasu doesn't take him seriously.

The following morning, Josuke Higashikata and Okuyasu Nijimura discover a series of mystery circles in the middle of a crop field: half-buried in the crop of the larger central circle lies Mikitaka. He is wakened up by Josuke and Okuyasu's arrival and his strange personality is immediately revealed: instead of introducing himself, he asks if he is currently on planet Earth and claims to be an alien. The protagonists think he's just kidding, but when he eats Josuke's handkerchiefs and pulls two frozen ice-creams out of his bag, they realize there's something strange about him.

He finally reveals his name to be Nu Mikitakazo Nshi (ヌ・ミキタカゾ・ンシ), a 216-year-old space pilot. He says his planet lies within the Magellanic clouds

and is slowly dying, and that he came to Earth to see if it was a nice planet and if its inhabitants were friendly. As a fire truck passes by, its noise causes Mikitaka to experience a violent skin reaction. He begs Josuke to take him away, revealing his transformation power for the first time.

Mikitaka and his mother (maybe)

Later in the story, Josuke and Okuyasu meet Mikitaka again, staring at an abandoned telephone tower while assuming the form of a pair of binoculars. After a short exchange of words, Mikitaka expresses that he found the tower unnatural and was waiting there in order to show them, which upon closer inspection it turns out to be true as there is smoke coming out from it. Mikitaka then returns into this binoculars form to help Josuke and Okuyasu investigate the tower, only to find out there is actually a person living up there in a seemingly self-sustainable fashion complete with various furniture, a set of essential installments and a farm field for herbs and vegetables.