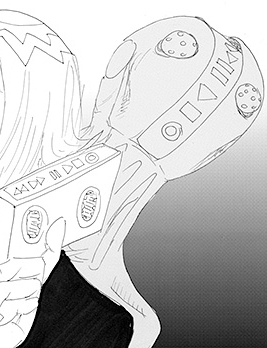 Videodrome (ヴィデオドローム, Videodorōmu) is the Stand of Leone Abbacchio from the 37th universe, featured in the light novel JORGE JOESTAR. It resembles Moody Blues and materializes recent events that have happened to someone into a watchable, interactive hologram.

Videodrome slightly resembles its original universe counterpart, Moody Blues. Although its appearance below its chest is not depicted, Videodrome appears to be a humanoid Stand. It has a round, wide head with no nose or mouth and its eyes resemble the speakers of a cassette player with several circles in them.

A groove splits its face in the middle between its eyes and has video player buttons on it, including fast forward, pause, play, stop, and record. Its neck is thick and rectangular, with three long vertical holes going down to its chest.

Videodrome has retrocognition abilities that are similar to Moody Blues, but with some variations and different limitations. Videodrome can record everything that happens to someone for twenty-four hours after midnight, but cuts off at the moment of their death.

Abbacchio first has to stick his hand deep through someone's body, about ten centimeters past his wrist, in order to retrieve a videotape from within them. He can also do so with corpses. The videotape has the person's name and the date in their native language written on its spine. The corner of the tape displays control buttons. When the play button is pressed, the tape unfolds and transforms into the shape of the person, replaying everything they did from midnight until midnight or until their death.[1]

Before the person is about to die in the replay, a three second countdown appears in the air reminiscent of a countdown in an old movie. After dying, the words "THE END" appear in the air. When it's finished playing, the shape of the person folds back into a videotape. The videotape can be replayed as many times as Abbacchio wants and can also be paused, rewound, or fast forwarded.

Bodies that are being replayed by the Stand are able to be touched, allowing detectives to gather more evidence such as blood, dirt, or sweat. However, it is only temporary since it is a recording. If someone was to get blood on their hands, it would disappear after the tape finishes playing.[2]