From JoJo's Bizarre Encyclopedia - JoJo Wiki
Jump to navigation Jump to search
This page is a translated version of the page Messina and the translation is 0% complete. 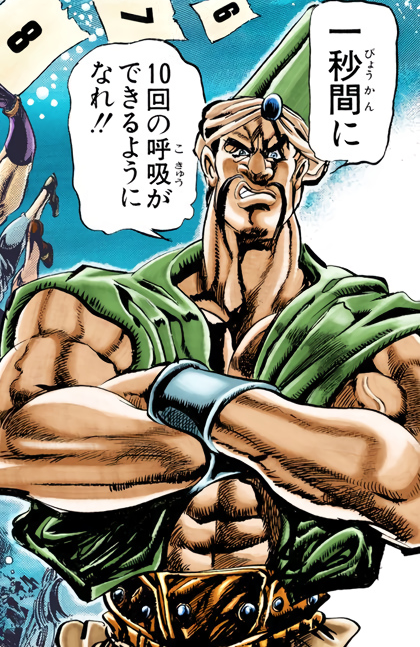 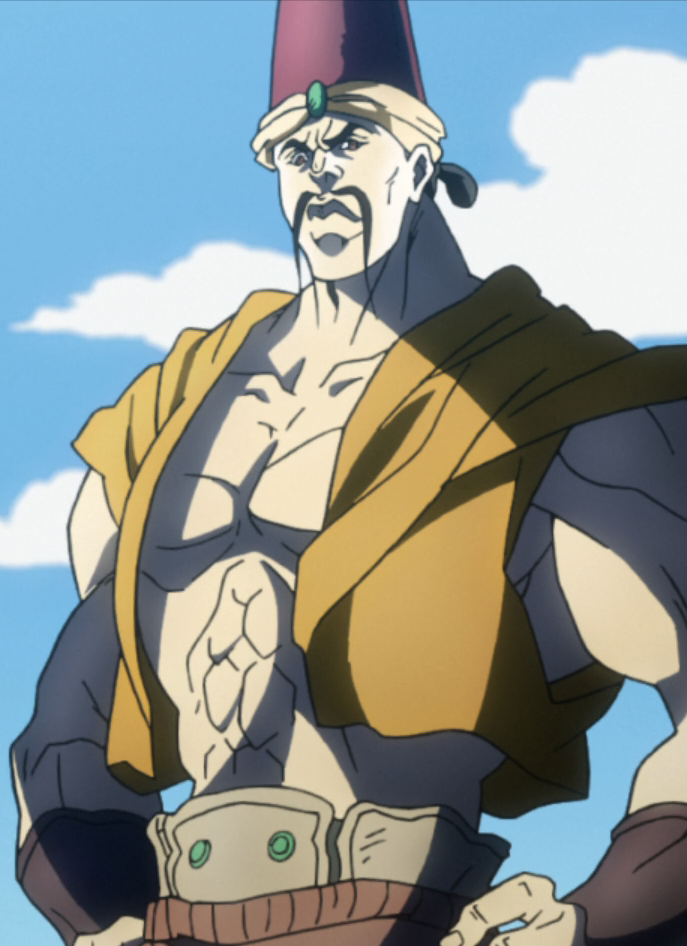 Episode 16 - Ripple Teacher Lisa Lisa
“
We must keep our minds on protecting Lisa Lisa and the Red Stone! This isn't the time to let our emotions get to us!
”
—Messina, Chapter 80: Flame Mode Esidisi, Part 3

Messina (メッシーナ, Messhīna) is a minor ally featured in the second part of JoJo's Bizarre Adventure, Battle Tendency. As Lisa Lisa's servants and Ripple masters, he and Loggins train Joseph and Caesar Anthonio Zeppeli in the ways of the Ripple.

Messina is a tall muscular man with short hair tied into a ponytail and a Fu Manchu mustache. He wears a long hat, a sleeveless tunic, and armbands.

During his training with Caesar, it is revealed that his arms are hairy, as the youngster's Ripple completely burns off the hair of his right arm.

Although much of Messina's personality isn't focused upon, he displays the characteristics of a stern, yet effective instructor to Joseph and Caesar. Despite this, Messina seems to have a sense of humor as he, along with Loggins, would often tease his disciples during their training.

As one of Lisa Lisa's disciples, Messina is considered a skilled Ripple user and fighter. He is respected by both Caesar and Joseph as one of their masters, and his skill is indicated by being the final test for Caesar's 20 day training.

Messina and his partner Loggins are Ripple Masters as well as Lisa Lisa's servants. They trained Joseph Joestar and Caesar Anthonio Zeppeli how to enhance their Ripple for about 20 days, where they had to learn things such as how to inhale for 10 minutes straight or how to inhale 10 times in one second.

Joseph and Caesar's final test had them in a Ripple match against their teachers. Messina would fight Caesar. After a while, Messina forfeited his match against Caesar, astonished that in 3 weeks, Caesar had gained more Ripple power than he had in 10 years (whilst also noting Caesar's Ripple being powerful enough to burn his arm hairs off). Messina went with Lisa Lisa, Caesar, and Joseph to Switzerland to find the Red Stone of Aja.

When Caesar decided to go ahead of the group to Saint Moritz and fight Wamuu in an attempt to defeat Kars early, Messina decided to follow him. During the battle, Messina's arm was cut off by Wamuu and he was dragged away into the building. Caesar, upon entering, was relieved to see Messina unharmed, though knocked out for the rest of the fight. Unconscious, Messina would not bear witness to Caesar's death, and was retrieved by Joseph to safety after negotiation for the final battle had been finished. As he wasn't in any condition to fight with only one arm, he did not show up in the final battle against Kars.

After the battle, Messina attended Joseph's "funeral" and, just as everyone else, was shocked to see that Joseph was alive.

His whereabouts afterward is unknown, though it's easily presumed that he passed away during the 50-year gap between Part 2 and Part 3.

In the light novel JORGE JOESTAR, Messina is a young Ripple warrior working for Straizo. Although he isn't mentioned by name in the text, he is featured in an illustration. He travels with Straizo and other companions to La Palma

to pick up Lisa Lisa once it is decided that Lisa Lisa will be adopted by Straizo and live in Italy. Messina and his friends have a big, noisy dinner at Erina and George's house, eating and drinking a lot.

The next morning, he carries Lisa Lisa's luggage as they say farewell to the Joestars.[1]

After England's zombie invasion in 1915, Messina and the other Ripple warriors travel to every corner of England and report that there are no further signs of zombies. They institute a national health exam to make sure there are none hiding inside ordinary citizens.[2]

Messina appears in Diamond Records as a 4 star assist character in both the Action Battle and Tactical Battle game modes. His has one 'Unity' type statue. Like all assist characters, when the active assists link together, his assist ability may provide extra effects (Action Battle mode only).
Moveset

(Assist Ability) Messina will strike the opponent repeatedly, before jumping and doing one last strike with a chopping motion, leaving the opponent(s) hit temporarily stunned. He then laughs at the opponent before leaving.