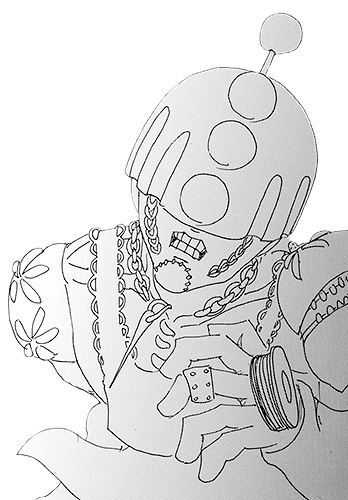 Stepmom (グッドナイト・ムーン, Guddonaito Mūn, lit. Goodnight Moon)[TL Note 1] is the Stand of Bruno Bucciarati from the 37th universe, featured in the light novel JORGE JOESTAR. It resembles Sticky Fingers and can sew things together with its needle.

Stepmom resembles its original universe counterpart, Sticky Fingers, with a couple of minor differences. It is a feminine humanoid Stand with a height and build similar to Bucciarati's.

Aside from its mouth, Stepmom's face is hidden by a helmet adorned with a column of antennae, resembling sewing pins, on the center up to the top of its head. Chains hang down from the helmet onto both cheeks. A patch of some sort is stitched onto its chin. On its neck is a chain necklace with a sewing needle attached to it. It wears a frilly apron on top of what appears to be a dress with a flower pattern on its shoulders. Its left shoulder also seems to have a bandana with a zipper design tied to it.

A bobbin is attached to the top of its left hand and it wears a thimble on its middle finger.

Stepmom can sew things together at rapid speeds using its needle and thread. It first sticks the needle into its target, pulls the thread after, and then begins stitching. Bucciarati uses it to stitch Giorno Giovanna's lips together after discovering that he is lying.[1]

Other languages:
English • português do Brasil
Retrieved from "https://jojowiki.com/index.php?title=Stepmom&oldid=713215"
Categories: