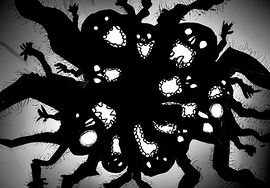 JORGE JOESTAR
“
When humans are imagining something out of anxiety or fear, what they imagine remains behind, collects, haunts, and can even take on concrete form. That's how there can be a spider with gorilla legs lurking in the darkness underground, how people can die painting pictures of the Mothman on land, and why Gremlins appear in the air.
”
—Penelope de la Rosa, JORGE JOESTAR Chapter 14: Desolation Row

The concept is loosely based on a real life phenomenon

where collective illusions of threats, whether real or imaginary, is transmitted through a population in society as a result of rumors and fear. The fears, paranoia, and imaginations of people manifest into surreal beings. They are based on cryptids

, also known as Unidentified Mysterious Animals (UMAs) in Japan. Rumors of seeing these creatures spread among the locals, developing their collective hysteria.[1] Extreme cases can eventually lead to people attempting to kill themselves while in a hypnotic state. The creatures can disappear when people either get over their fear, or their fear disappears.[2]

The Mothman (モスマン, Mosuman) is a man with giant black wings resembling a moth. Around five years after the incident with the vampire Alejandro Torres in La Palma

, the Mothman is created from people's fear of confinement. On the night of the Torres case, villagers were forced to stay locked in their houses. Seventy of those villagers become afraid something like that would happen again, and when they gather together their fears feed off each other.

The Mothman also appears in the 37th universe. Citizens of Morioh gather at a temple in Jozenji and start covering the walls and floors with drawings of the Mothman. They were trying to get the drawings right but felt none of the drawings did him justice, so they had to try again. Jorge Joestar describes it as having two burly legs, a large head, and eyes staring out at whoever sees it. The villagers would soak each other with gasoline while the walls burned down, leaving themselves to die while they continued drawing. Rohan Kishibe37 states that they sought after beauty, trying to make the Mothman appear symmetrical like he really is. 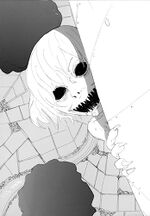 Gremlins (グレムリン, Guremurin) are monsters of varying appearances which all loosely resemble the zombie Antonio Torres. They are born from the fear of heights when a member of the Royal Aero Club

sees Antonio on his plane. Rumors spread among the pilots, and they start blaming any airborne mechanical failures on these monsters. They were small, skinny people with no eyes.

George's friend, Jim Graham, also sees one who he says is less than 50 centimeters tall. The Gremlins always appear out of nowhere while pilots are flying, break something, and then vanishes. Sometimes the pilots see the real Antonio's zombie clones instead of the Gremlins. Some say the Gremlin looks like a lizard with giant ears, whereas others say it has horns growing out of its head. The only common ground is that the creature always has dark pits where its eyes should be like Antonio.[5]