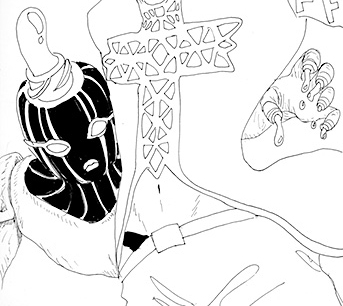 Blob (ブロブ, Burobu) is the Stand of Dolcio Cioccolata from the 37th universe, featured in the light novel JORGE JOESTAR. It has a similar appearance to Green Day but creates tornadoes instead.

Blob appears similarly to its original universe counterpart, Green Day. It has dark skin with lighter vertical lines across its neck and face. Its chest, shoulders and arms are lighter in contrast. Blob has a cylindrical shiny bulb atop its head. A slime-like substance oozes out of its fingertips and there is a hole in the center of its palm.

Blob creates tornadoes which can vacuum up anything within its range. Cioccolata uses it to kidnap several exhausted citizens of Morioh within the school gym.[1]