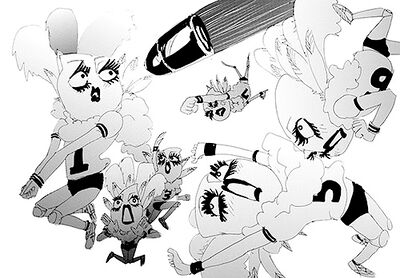 The Iron Ladies (アタック・ナンバーハーフ, Atakku Nanbā Hāfu, lit. Attack Number Half)[TL Note 1] is the Stand of Guido Mista from the 37th universe, featured in the light novel JORGE JOESTAR. They have a similar appearance to Sex Pistols, but are cross-dressers wearing female gym uniforms, and also redirect bullets.

The Iron Ladies resembles its original universe counterpart, Sex Pistols, with some minor differences. The Stand is composed of a colony of six tiny bullet-like entities with pointy heads. They wear the older style of Japanese female gym uniforms, consisting of a t-shirt, bloomers, wristbands, knee-pads, and sneakers. Their t-shirts have a large, bold number written on the center ranging from 1-3 and 5-7, excluding the number 4. They also have frilly necklaces with large peacock feathers attached to it on the back of their necks.

They all wear heavy makeup, lipstick and dark eyeliner to exaggerate the length of their eyelashes.

The Stand acts like noisy stereotypical teenage women or flamboyant men. Despite the way they talk, their voices are deep and hoarse. They are named after Japanese volleyball positions, such as Back Left (バックレフト, Bakku Refuto) and Front Center (フロントセンター, Furonto Sentā).

They argue with each other and have fun messing with Vinegar Doppio (Universe 37), after giving him scars that look like cat whiskers. One calls Doppio adorable whereas another tells Mista to imprint the design of Doppio's scars as a new fashion trend which will be the rendezvous of simple beauty and prettiness. Back Left tells Mista to add cat ears to the trend but Front Center and the others insult Back Left saying it's getting too carried away being in Japan.

The Iron Ladies has the same abilities as Sex Pistols. They ride on top of the bullets that Mista fires and then violently kick the bullets to change their path. They also seem to rely on using volleyball tactics to move Mista's bullets around, based on their illustration. The Stand displays good accuracy as they are able to deflect each of Mista's bullets just enough to brush past Doppio's cheeks and leave light scars rather than directly hitting him, as a way of intimidation.[1]