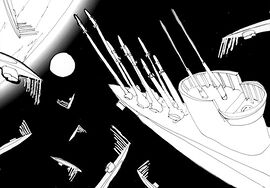 , particularly from the First

World Wars. Unlike most submarines with rounded bows

, U-Boat has pointed bows, resembling a boat more than a submarine.

On its deck is a sail

. The sail has diving planes

, radio antennae, and a periscope attached to it. 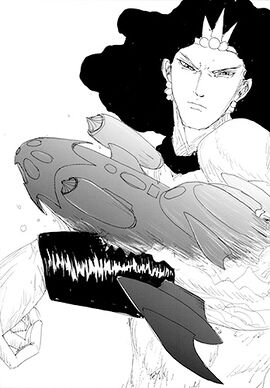 U-Boat Ultimate has a different design than Narancia's regular version. Compared to the original, it appears more futuristic and has a rounded bow like most normal submarine designs. Its surface does not seem to have any antennae or torpedo tubes. The sail is also shorter and flat on the top. Attached to the front on each side are jet engines

and on its sides are larger diving planes.

Kars uses the Stand's sonar to generate an extremely loud explosive noise, echoing through its target's body. It is impossible to block out the noise when the Stand is inside its target's body since blocking their ears would not help them when the noise comes from inside them. This ability causes Enrico Pucci37 to writhe on the ground in pain and Jorge Joestar's ears continue ringing even after the ability is turned off.[2]