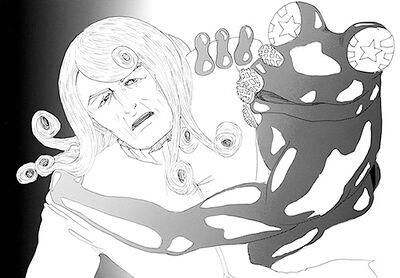 Singing in the Rain (雨に唄えば, Ame ni Utaeba) is the Stand of Funny Valentine from the 37th universe, featured in the light novel JORGE JOESTAR. It is a frog-like Stand that can be ridden and is an unstoppable mount that can bring its rider anywhere despite the difficulties.

Singing in the Rain is a short, transparent, humanoid frog. It can walk either in a bipedal or quadrupedal manner. The frog has a muscular torso and long arms. Its eyes have three rectangles on each side and a star in the center.

The full details of the Stand's abilities are unknown but it appears to be related to mobility and can stick itself onto surfaces. With Funny Valentine traveling on its back, the frog easily walks across the surface of the barrier surrounding Morioh. Funny is also able to ignore the heavy winds from outside the barrier. Later, the Stand strongly clings itself to the barrier to prevent Funny from falling off.[1]