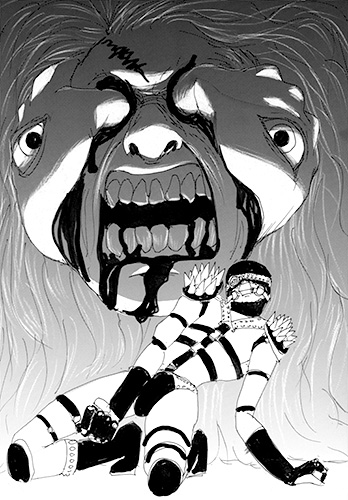 Evil Dead (イーヴルデッド, Īvuru Deddo) is the Stand of Secco Rottario from the 37th universe, featured in the light novel JORGE JOESTAR. Having the appearance of a giant head, it can make a specific location invisible from another location.

Evil Dead appears as a giant widened humanoid head. Its eyes are spread wide apart and are on top of protrusions on the sides of its face. Blood seeps in between both protrusions and from its teeth. It also has long hair and a scar on its forehead.

Evil Dead can make a specified location invisible from a particular direction. Secco uses it to hide the harbor of Nero Nero Island from people within the island, but the harbor can be seen by people outside of the island.[1]