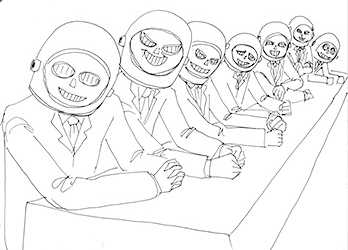 Right Stuff (ライトスタッフ, Raito Sutaffu) is the Stand of Pocoloco Tripleseven from the 37th universe, featured in the light novel JORGE JOESTAR. This Stand is a group of seven tiny humanoids that will efficiently perform any task Pocoloco asks of them.

Right Stuff is composed of seven tiny humanoid entities which Jorge Joestar describes as strange gnomes. They wear formal suits and astronaut helmets. All of them have different shaped eyes but they are mostly round with lines on the inside. They have triangular noses and they all appear smiling.

Right Stuff works together collectively to accomplish a task given to them by Pocoloco. In order to escape from The Eyed Balloon's tentacles, Right Stuff quickly makes tiny models of the H. G. Wells spaceship. It then takes the models apart like a pit crew and analyzes the problem to resolve the situation. The Stand learns that if they release all of the exterior walls of the H. G. Wells from the inside and then start the engines at full power as soon as the walls release, they'll be free from the tentacles.

Right Stuff is also able to locate the explosive device hidden inside the spaceship and is knowledgeable in how to remove it.[1]