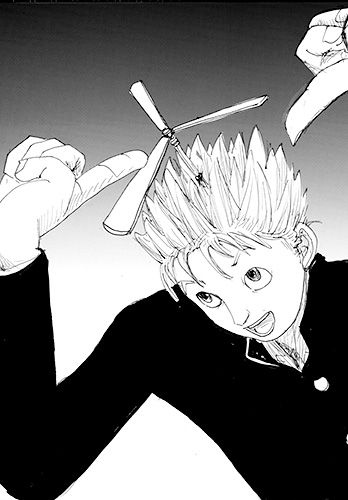 Blue Thunder (ブルーサンダー, Burū Sandā) is the Stand of Koji Hirose, featured in the light novel JORGE JOESTAR. Blue Thunder is a Stand that spawns propellers of potentially varying size on people.

Blue Thunder appears as a miniature propeller resembling the bamboo-copter gadget of Doraemon.[1] Koji can change its size into becoming much larger.[2]

Blue Thunder can spawn propellers anywhere on Koji's body, such as on his hands or his head. He can also put them on someone else's body. Propellers placed on his hands allows him to blow gusts of wind, which Koji uses to blow away falling pieces of debris.[2]

Koji can abruptly increase the size of his propellers to become as large as an entire school, which Jorge Joestar describes as a giant shredder. The Stand starts spinning its blades faster and becomes strong enough to tear apart the walls of a school building.

If a propeller is placed on Koji or someone else's head, it allows them to fly and steer themselves at will by merely thinking where they want to go, without using their hands. Those who are loaned Blue Thunder can fly far away from Koji as well, as long as they keep the propeller on their head. If they take it off, the propeller vanishes and they cannot re-summon it without Koji being there to give it to them again.[3]