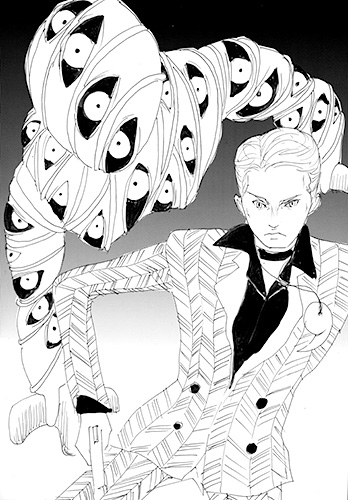 Twister (ツイスター, Tsuisutā) is the Stand of Prosciutto Cappano from the 37th universe, featured in the light novel JORGE JOESTAR.

Twister resembles The Grateful Dead, depicted as a humanoid torso covered with eyes. It has no mouth, lacks legs, and has large arms with three segmented metal-like fingers evenly spaced around its circumference. Unlike The Grateful Dead, it has a spiral motif in between its eyes covering its face and body.

As Twister and Prosciutto were only illustrated and not actually mentioned by name in the novel, the Stand's abilities are unknown.[1]