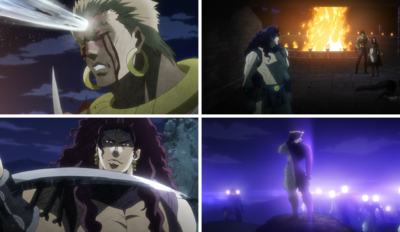 After tying and choking Joseph to the stone wall of the central pyre with his severed arms, Wamuu unleashes his Final Mode: Atmospheric Rift. Using special tubes to suck in the air at high speed to eject it through a thin slit like a blade made of wind, the Pillar Man threatens to decapitate Joseph although the fire somewhat hides Joseph's exact position. However, the force of his inhaled air starts peeling away his own body. Joseph throws a Molotov Cocktail at Wamuu, who cuts it, but then lights Caesar's Headband with the pyre and throws it. Wamuu unwillingly sucks the embers of the headband and the oil from the firebomb and explodes. JoJo has finally won the battle. 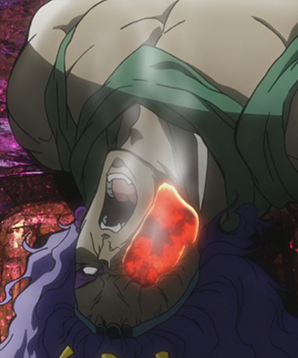 Commentary
“
I confess to having laughed a little at Wamuu's death. Granted, it's classy and gentlemanly, but when he shoots his own head and shouts "You miserable vermin!" it becomes so funny. He's a resourceful one for sure (laughs)! Episode 23 is also the episode with Kars's famous "win win win" when he caresses Lisa Lisa's legs. We've just come back from Wamuu's dignified end, but it's finally this scene you remember most when the episode is done. There's nothing we could do, it's the structure of the series that needed it (laughs). Kazuhiko Inoue was delighted to finally be able to act the entirety of Kars's trickery and baseness; he really stole the spotlight from Lisa Lisa.