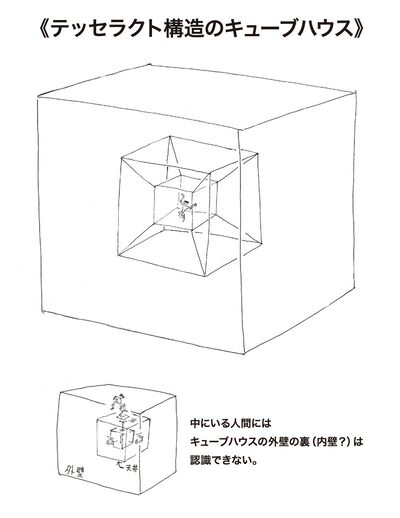 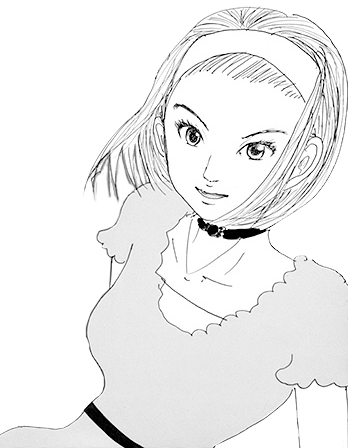 Penelope is unaware of her Stand, as it subconsciously manifested in the far future thirty-six universes later as a way to search for George Joestar after his body disappeared in 1920. Cube House is a tesseract made of eight square rooms that allows its occupant to move indefinitely in any direction. Falling vertically through four doors in the center of Cube House allows one to travel through time.

The Stand's main body is a teenage girl named Reimi Sugimoto (Universe 37) who controls the materialized house. It evolves into Arrow Cross House after Reimi is stabbed by the Arrow and develops a Wound. Both Cube House and Arrow Cross House are able to exist simultaneously as long as the Arrow remains in Reimi.

As its name implies, Cube House appears as a huge white cube. Like Penelope's Wound, it is a locked room with no windows or doors on the outside, nor any visible entrance. However, there are doors on the inside on each wall leading to other rooms.

The interior of Cube House is a tesseract. When Cube House evolves into Arrow Cross House, the original Stand remains in the center of the house. After Rohan Kishibe (Universe 37) purchases the house, he puts his desk and lamp in the center room and makes it his study. Including the floor and ceiling, the study's six sides form a cube, and there is another identical cube on each side. Each of the cubes are linked to each other, for a total of eight cubes leading into one another. The furthest cube out turns in on itself and is surrounded by the other seven.[1]

The main body of the Stand is Reimi Sugimoto, a young girl with sympathetic, youthful features and large, light eyes. She has chin-length light-colored hair, kept back with an Alice band. She wears a choker and a short sleeveless dress. Bands at her upper arms taper in a crisscross pattern at the top of her forearms. Despite being indistinguishable from a human, she is only visible to Stand users. However, the house that she creates is visible to non-Stand users as it is a Materialized. After Rohan allows Jorge Joestar (Universe 37) to see Reimi with the power of Heaven's Door, Jorge finds her quite attractive and beautiful.[2]

Cube House is entirely operated by its main body, Reimi, as Penelope is unaware of the Stand. Although she is a Stand, Reimi is sentient and acts like a normal human with emotions. As Cube House, her personality is a combination of the original universe Reimi and Penelope. She is firm and strict with her resolve to find George and protect the Arrows that were given to her. After the Stand evolves into Arrow Cross House, she loses her memories of the past and how she was originally like. Her personality changes to the original universe Reimi's jovial side after becoming friends with Rohan Kishibe, Muryotaisu Nijimura, Fukashigi Nijimura, and Koji Hirose.

Meeting George later helps her regain her memories and remember her purpose, causing her original personality to resurface. She feels her master's love for George and is disappointed when he doesn't realize that her master is Penelope. Reimi is undaunted and confident, not allowing the Passione gangsters to have their way with George.[3]

Cube House was moved from Nishi Akatsuki in Fukui to Morioh at some point in 2004. Reimi reveals that she went to Morioh while waiting for George to get there.[3] Nobody in Morioh knew who actually owned the house or how it got there.[2]

At some point, Reimi was asked by someone to protect four Arrows. She accidentally stabs herself with them in 2007 and the Stand develops a Wound, transforming it into Arrow Cross House.[3]

The interior of Cube House is structured similarly to a tesseract, meaning there are eight identical cubic rooms that are four-dimensionally adjacent on all six sides. Opening the door on all sides, including the floor and ceiling, leads to a room that looks exactly the same. Cube House is habitable and follows a bizarre set of rules that defies logic and physics.[2] 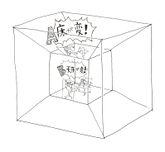 Normally the seven cubes of a tesseract form the inside of an eighth cube that wraps around them. However, Cube House is a tesseract made of square walls, and contains its own entire universe squeezed inside it with its own spacetime. The walls of the Cube House are the ends of that world allowing the inside to be impervious to all attacks from the outside.

Cube House is meant for a single occupant. If two or more people run around inside, it could lead to contradictions since the rooms rotate to accommodate the people inside. If two people encounter a contradiction, Cube House will handle it by pulling one of its occupants into a parallel universe where they will get lost and never escape.[4]

If someone breaks or falls through four doors in the center of Cube House's floor, they would end up falling through an infinite tunnel. Gravity would rapidly increase their fall speed eventually leading to time and space bending around them.[5]

Cube House takes the person falling and sends them to help someone in the world who they would be most useful to, including other universes. It seems to obey voluntary commands allowing people to think of where they want to travel to as Dio Brando uses it in this way, but it prioritizes the will of someone who needs their help. If no one needs their help, then Cube House will take them where they want to go.[6]

The time traveling effect of Cube House remains on whoever falls for a while after being activated, allowing them to use its ability to some extent while they are elsewhere.[3]

As Reimi is a part of the Stand herself, she is unable to leave Cube House. While she can still go outside it, she cannot travel too far on her own. However, she is capable of transporting herself with the entire house by rolling the house like a die.[6]