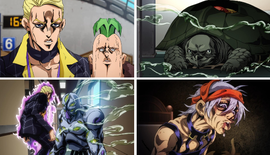 Express Train to Florence (フィレンツェ行き超特急, Firentse Iki Chōtokkyū) is the fourteenth episode of Golden Wind and the one hundred twenty seventh episode of the JoJo's Bizarre Adventure anime. The episode covers from Chapter 486 to Chapter 489 of the original manga.

Team Bucciarati take a train to Florence, hiding inside the shell of the turtle Coco Jumbo. Unbeknownst to them, the team are trailed by the duo of assassins Prosciutto and Pesci.

Team Bucciarati has acquired the key the Boss has instructed them to find in Pompeii. After having gathered and stitched back Abbacchio's hand with a zipper, they all depart inside their minivan to Naples' train station. On the way, Abbacchio reexamines the jewel inside the key inside of which are engraved further instructions to head to the sixth platform of the train station and take the earliest train to Venice. Meanwhile, Fugo is unwillingly mixed with Mista's attempt at sneaking a peek at Trish's cleavage. The car suddenly swerves and Fugo is thrown into Trish's chest, causing Mista to loudly beg for mercy and deeply embarrass Fugo in the process.

Prosciutto and Pesci stalks Team Bucciarati at the train station

At the train station, the duo of assassins, Prosciutto and Pesci, find Bucciarati looking around on the platform. While Pesci expresses a wish to avenge his fallen comrades, Prosciutto chastises his junior for expressing empty threats. As they close in on Bucciarati, the latter is perplexed that no present lock fits the key but finally finds a turtle whose shell has a key-shaped hole. Taking the turtle with him, Bucciarati suddenly rushes inside the train to his companions. When Prosciutto and Pesci arrive at Bucciarati's supposed position, they cannot find their target. Indeed, the turtle named Coco Jumbo is a gift from the Boss, possessing a "room" inside of its shell that people can access, complete with chairs, a couch and even a fridge with drinks in it. The small turtle sneaks past the assassins into the driver's cabin. 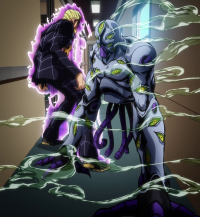 Prosciutto is sure that the group is somehow still aboard the train and decides to stay aboard with Pesci. On Prosciutto's orders, Pesci summons his fishing rod Stand, Beach Boy. Launching the hook and line through the door of the driver's cabin, Pesci only senses two lifeforms and hooks the driver, forcing the door open. Seeing no one in the cabin, Prosciutto shifts his attention elsewhere but Pesci privately investigates further, sure about the second lifeform. Although he almost finds the turtle, Pesci sees dark fumes and realizes that Prosciutto has summoned his Stand The Grateful Dead to wreak havoc and force his targets in the open. Distracted, he leaves the cabin.

Due to Grateful Dead's ability, the gang is aging at a rapid pace

Inside the turtle, the group tries to kill time as best they can. Mista offers Narancia a drink, but he is seemingly unable to hear him. To the group's shock, Narancia has become extremely old, with all the ailments that come with it. To their horror, the heroes realize that everyone is becoming older, and it is revealed that the entire train is aging at a dramatic rate. Realizing that a new Stand User is attacking them, Bucciarati immediately sends Mista out to fight their unknown enemy but the barely conscious Giorno stops him from rushing. Despite the urgency, Giorno notices that some of them have remained relatively young and that the assassin must somehow discriminate between people as they want Trish alive. Deducing that the ability affects the most those with higher body temperature, the group sends Mista out with the two remaining ice cubes from the fridge.

Out of the turtle, Mista decides to activate the air conditioning to help his teammates. However, Pesci, who is munching on ice in the bar wagon has turned the button into a bait for Beach Boy, immediately sensing Mista punching the button. Pesci hooks Mista who realizes he has two enemies to fight.