Man in the Mirror and Purple Haze 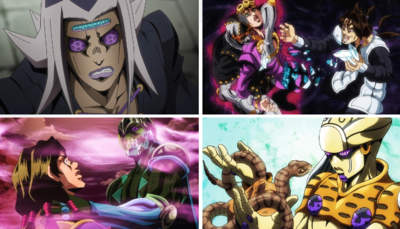 Man in the Mirror and Purple Haze (マン・イン・ザ・ミラーとパープル・ヘイズ, Man in za Mirā to Pāpuru Heizu)[1] is the thirteenth episode of Golden Wind and the one hundred twenty-sixth episode of the JoJo's Bizarre Adventure anime. The episode covers from the second half of Chapter 481 to Chapter 485 of the original manga.

Fugo is taken out of the fight and Abbacchio runs to retrieve the key. However, he thus becomes Illuso's next target.

Abbacchio notices Illuso in a mirror

Illuso has Fugo cornered in the mirror world with his Man in the Mirror, leaving Fugo's Stand, Purple Haze, in the real world and his two companions, Giorno Giovanna and Leone Abbacchio, ignorant of what happened. Abbacchio decides to put the objective first and runs toward the dog mosaic, but Illuso picks up on the pebbles Abbacchio disturbs when running, prompting him to leave Fugo and intercept. Upon arriving at the dog mosaic and entering the atrium, Abbacchio sees a key inside of a crack in the floor but also notices a mirror shard with Illuso approaching him from inside.

Illuso defeats Abbacchio and his Stand

Abbacchio understands the situation and kicks the mirror, shattering it into pieces. However, Illuso grabs one of the pieces and manages to drag Abbacchio's hand into the mirror before he can grab the key. Indeed, the small mirror shards only multiply the places where Illuso can attack from. However, when Man in the Mirror drags Abbacchio into the mirror world, Abbacchio unexpectedly grabs the Stand's throat. "Abbacchio" is revealed to be Moody Blues, which had turned into Abbacchio to trick Illuso. Meanwhile, Abbacchio observes the mirror world through a shard. A close quarters battle ensues in which Moody Blues emerges victorious, having a physical advantage over the ability-oriented Man in the Mirror. But when Illuso is punched to the ground, he grabs another shard and orients it at Abbacchio's shard, creating a reflection that allows him to drag his foe into the mirror world too. Ejecting half of Moody Blues and forcing half of Abbacchio inside to merge them together, Illuso neutralizes Abbacchio in both worlds and is now free to take the key.

Enjoying his advantage, Illuso threatens to stick a mirror shard inside of Abbacchio's mouth. However, the assassin then notices the key has disappeared and Moody Blues' clock rewinding. Abbacchio has cut off his hand and is now rewinding Moody Blues's hand in the real world to bring the key to Giorno in hopes the newbie will escape. Illuso runs to the corner of the street but laughs, seeing Giorno staying still with the key in his hand. When Giorno finally notices him, Illuso grabs the boy and drags him inside the mirror world. To his horror, the assassin realizes that Giorno had taken one of Purple Haze's bulbs and cracked it, his hand starting to decompose. With Man in the Mirror touching Giorno's hand, Illuso is now also affected.

In a desperate move, Illuso jumps out of the mirror, leaving his infected arm behind. All three members of Team Bucciarati are now trapped inside with the assassin out. Fugo is present and laments their defeat as well as Giorno's impending death, but Giorno declares that not all is lost. A brick suddenly moves and Giorno explains that he's turned a real-world brick into a snake, its heat sense allowing them to track Illuso. With a way to guess where the enemy is, Fugo can now command Purple Haze to grab him.

Cornered against a wall, Illuso sees Purple Haze's deadly fist coming right at him. But the assassin then sees a small glass shard and blocks Purple Haze with all of Man in the Mirror's power, intent on pushing it inside the mirror. Suddenly, a capsule is ejected into the wall and cracks, releasing the virus directly into Illuso's face anyway. Facing imminent doom, the assassin can only scream at the sight of his body decomposing and Purple Haze punching him until he turns into a puddle of liquefied flesh.

The mirror world disappears and the protagonists find themselves back in the real world, but Giorno is still infected with Purple Haze. However, Giorno declares his victory, looking at the snake he just created. Having created it inside of Purple Haze's virus cloud, Giorno is sure that the snake has developed the perfect antibodies to counter the virus and extracts them before putting them inside his chest and saving himself. Impressed by Giorno's ingenuity, Fugo declares his respect for the boy but Giorno also expresses that everyone, especially Abbacchio, has contributed to the victory. Abbacchio, listening from behind a corner, swears to beat Giorno up. With great difficulty, the trio has emerged victorious.

Meanwhile, in Napoli's train station, the head of the assassins looks over a corpse, picking up a piece of paper.

(Death)
Man in the Mirror