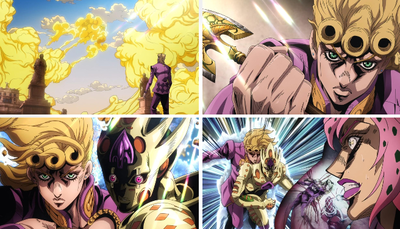 King of Kings (, Kingu obu Kingusu)[1] is the thirty-seventh episode of Golden Wind and the one-hundred-fiftieth episode of the JoJo's Bizarre Adventure anime. The episode covers from Chapter 584 to Chapter 587 of the original manga.

At the last moment, Bucciarati destroys Chariot Requiem and allows Giorno to take the Arrow. All is left is to unlock the power necessary to defeat Diavolo once and for all.

The situation has taken a turn for the worse; Not only has Trish's soul been dealt a fatal blow, but King Crimson has propelled his host right in reach of the Arrow before anyone could react.

Piercing its hand with the Arrow, King Crimson declares his victory before realizing that the Arrow is phasing through his fist. It is only when he lands on the ground that he sees that the souls altered by Chariot Requiem are returning to their original bodies as its body crumbles apart and Bucciarati's soul appears to taunt the Boss. Bucciarati explains that he has also guessed Chariot Requiem's weakness, revealing that he's about to completely destroy the ball of light behind him, which will destroy Chariot and fully return the souls to their original bodies. Diavolo angrily pleads for his cause, but Bucciarati destroys the ball anyway, obliterating Chariot and undoing its effects. While Mista realizes with glee that Trish's soul will be saved and Diavolo curses the heroes, Bucciarati has a last discussion with Giorno. Seeing Bucciarati's ghost in front of him, Giorno realizes that his partner is dead for good. For his part, Bucciarati confesses that until Giorno spurred him into action, he had been dying a slow death and entrusts the end of their mission to Giorno, asking him to salute the team on his behalf. Bucciarati thus ascends to Heaven and Giorno seizes the Arrow.

Giorno pierces his Stand with the Arrow

Having returned to his body, Diavolo cannot acknowledge that Fate, which had granted him King Crimson, could work against him. At a disadvantage, he decides to retreat temporarily but Trish warns Giorno of her father's intentions. As Giorno lifts the Arrow high in the air, Diavolo convinces himself to stay and fight Giorno; moreover, he forecasts that Gold Experience won't be changed. Diavolo thus runs toward Giorno as he uses the Arrow. The Arrowhead stabs Gold Experience's chest but it seemingly remains unchanged and drops the Arrowhead. Elated, Diavolo declares Giorno unworthy and sends King Crimson to smash Gold Experience's face in. However, Diavolo then realizes that the Arrow is being absorbed into Gold Experience and that it is undergoing a dramatic metamorphosis. King Crimson attacks again but realizes that he's only struck an empty shell.

Trish declares that Giorno has mastered the Arrow as Diavolo turns to see Giorno floating alongside his new Stand: Gold Experience Requiem. Confused, Diavolo can barely defend himself from Gold Experience Requiem's attack as it flicks a stone at King Crimson, piercing its hand and even destroying a stone column behind, only for the debris to turn into scorpions that leap to sting Diavolo. Giorno finally deigns to speak to Diavolo; he declares that as only reality matters, the reality born of righteous actions will always matter and questions whether Diavolo's action will amount to anything in the end. However, Diavolo internally realizes that King Crimson could still predict the attack, just barely, and thus that he still can kill Giorno. His hopes are confirmed when he forecasts himself killing Giorno and he thus erases time, predicting every attack coming at him. Diavolo evades bullets from Mista and also blinds Giorno with some blood before preparing to finally strike him down.

Suddenly, Diavolo realizes that events are now going backwards; blood is returning to his hand and the bullets fly back inside of Mista's gun. Furthermore, even the time erasure is being undone. Shocked, Diavolo tries to bash Giorno's head, only to realize that his actions are also reversing, to his dismay. Gold Experience Requiem then speaks out, explaining that Diavolo may see the future reality but that it can deny him this result. Diavolo finds himself in the exact state he was just before erasing time and realizes that his every action was for naught. Seeing the gulf in power between them, Diavolo is powerless to prevent Gold Experience Requiem from pummeling him.