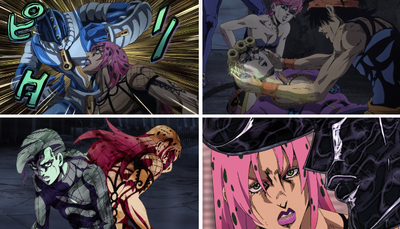 The Requiem Quietly Plays, Part 2 (は静かに奏でられる その②, Rekuiemu wa Shizuka ni Kanaderareru Sono 2)[1] is the thirty-fifth episode of Golden Wind and the one-hundred-forty-eighth episode of the JoJo's Bizarre Adventure anime. The episode covers from Chapter 575 to most of Chapter 578 of the original manga.

Team Bucciarati have had their bodies switched due to Chariot Requiem. Now two problems arise: how can they take the Arrow from Chariot Requiem, and where is Diavolo?

The Arrow forces Sticky Fingers to prevent Bucciarati from taking it

Still under the influence of Chariot Requiem's soul switch, Team Bucciarati and Polnareff see Bucciarati, in the body of Diavolo, intercept Chariot Requiem and sever the hand holding the Arrow with Sticky Fingers. Impressed by their leader's initiative, the group now watches carefully for Bucciarati's body. However, when Bucciarati tries to grab the Arrow, Sticky Fingers comes up to attack its own user; when Mista intervenes, one of the Sex Pistols goes mad and tries to kill him, but Trish and Spice Girl soften the bullet. As Chariot Requiem reattaches its severed hand and resumes walking, the group realizes that it can turn Stands against their users when they attempt to grab the Arrow, making their goal of obtaining it much more difficult. 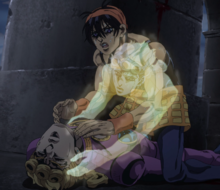 Giorno returns to his body after Narancia's untimely death

Sex Pistols then alerts the group: the person in Bucciarati's body has just woken up. Bucciarati thus orders Mista to shoot whoever it is. After a brief hesitation, Mista shoots and incapacitates Bucciarati's body. Meanwhile, Narancia allows himself to dream about the future. Out of bullets, Mista asks Trish to take some from his boot; but when Trish seemingly hesitates and Mista tells her to hurry, she points out that she already gave the bullets to him.

Seeing that the bullets fell to the floor without anyone noticing, Polnareff realizes that time has just skipped. Nervous, the group tries to seek how Diavolo could have approached the group undetected and suddenly realize, after seeing sudden droplets of blood, that Narancia has been impaled into metal bars right above the gang, one bar in particular fatally impaled through Giorno's head. The team desperately hurries to save their teammate, but it is too late to intervene—despite healing his body, Giorno's soul can only return to it as Narancia was already dead, his soul having already passed on.

As the group mourns Narancia, Fugo is shown in the streets of Naples realizing that something has gone wrong. Narancia's soul, taking the form of a sparrow (whose shadow appears as Aerosmith), soars into the clouds above the shore on which Abbacchio was killed and disappears.

"We have to leave you here. So that no one can hurt you anymore... ever again. But I promise, I will take you back home."
Polnareff pieces the clues together and realizes the exact link between Diavolo and Doppio. Despite their grief, he warns the group that Diavolo and Doppio are split personalities - two souls sharing one body. While Requiem's ability has switched one soul with Bucciarati, Diavolo's soul must be lurking somewhere close inside someone. Narancia was the first victim because his radar could have easily detected Diavolo. Giorno promises Narancia he will bring him home and surrounds his corpse in flowers. Suddenly, Trish catches a glimpse of King Crimson in the shadows but doesn't notify the others.

As the group walks out into the streets of Rome, they see the chaos and confusion caused by Chariot Requiem's ability. A criminal in the body of a police officer tries to arrest Mista but gets shot for his trouble. The group catches up to Chariot Requiem, allowing Bucciarati to observe the rogue Stand thoroughly. Noting its apparent physical weakness, Bucciarati makes it trip and drop the Arrow. Giorno experiments with Requiem's protective ability and discovers that not only does Requiem use Stands against their own users, it also prevents non-living objects from touching the Arrow. Lacking a Stand, Polnareff grabs the Arrow with his mouth and tells Mista, the closest person to him, to use it on Sex Pistols. Suddenly, Chariot Requiem stands up and rushes toward Polnareff.