, utilized a game engine called "Artistoon" in order to create a graphical style similar to Araki's art style in the manga.

The game was set to be released in America on October 24, 2002,[1] but was delayed and eventually canceled due to unknown reasons. 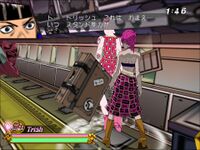 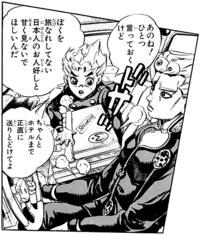 (E3) 2002, titled simply as GioGio's Bizarre Adventure. The release was eventually canceled due to unknown reasons.

A fan-initiated translation project was developed to completely translate the Capcom game into English. The English patch is a combined effort of the groups Joey Jojo's Wacky Trip and JoJo's Colored Adventure Team.[2] It was released on October 20, 2018.[3]