The Hundred vs. Two Strategy 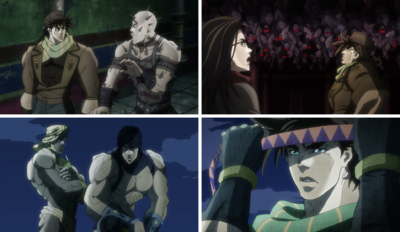 The Hundred vs. Two Strategy (100対2のかけひき, Hyaku Tai Ni no Kakehiki)[1] is the twenty-first episode of the JoJo's Bizarre Adventure anime. It is also the twelfth episode of Battle Tendency. It covers Chapter 94 to Chapter 97 of the Battle Tendency manga.

In the aftermath of Caesar's death, Joseph and Lisa Lisa go further into the Pillar Men's hideout. They encounter the Pillar Men, who have managed to raise a small army of Vampires which forces them to change their strategy.

The short history of the hotel JoJo and Lisa Lisa find themselves in is presented: it was once a luxurious establishment before falling into ruin when its owner died. Kars eventually turned it into a temporary lair.

Whilst following Wamuu's trail of blood, Joseph and Lisa Lisa encounter another Vampire named Wired Beck. Beck is confident but Lisa Lisa instantly destroys him with her Ripple-infused scarf. Before continuing on, JoJo states he will not take the antidote he received until he has beaten Wamuu as a promise to Caesar.

JoJo and Lisa Lisa proceed to a dark chamber where Wamuu is waiting for them. Joseph wants to attack but Lisa Lisa then detects the 100 hidden Vampires in the room, impressing Wamuu with her skill. Kars reveals himself and orders the Vampires to attack, even denying Wamuu his chance to fight JoJo. However, Lisa Lisa manages to hold off their attack with a bluff saying that if both she and JoJo are killed, a time bomb will destroy the Red Stone of Aja. Thus, she proposes that JoJo fights against Wamuu whilst she fights against Kars with the stone on the line.

Wamuu and Kars arrange a place for the battle at midnight at the Skeleton Heel Stone near the foot of Piz Bernina, keeping Lisa Lisa as insurance to make sure JoJo brings the stone. After bringing Messina back with him, JoJo searches Lisa Lisa's luggage and finds a picture of Erina, Speedwagon and Straizo from fifty years ago, becoming curious as to why Lisa Lisa would have it. Upon meeting at the arena, Lisa Lisa reveals that she was the baby that Erina rescued from the ship that fateful day, further explaining how she was raised by Straizo, who was the one who taught her about the Ripple and gave her the stone. As JoJo and Wamuu's battle is revealed to be a chariot race using vampire horses, JoJo puts on Caesar's Headband and prepares to battle.

“
Episode 21 is the only one where each half of the storyboard was tasked to a different person. It's a transitional episode between Caesar's death and the chariot race, but it's also the one where Lisa Lisa is featured the most.

The fight against Wired Beck had to be done before the opening credits but the editor, Kiyoshi Hirose, thought it was cruel for the character (laughs). His voice actor, Satoshi Tsuruoka, did give some energic acting and gave Wired Beck some depth. Honestly, the episode could have ended here after the first half. Structurally speaking, it would have worked (laughs). It's all we needed for the chariot race.