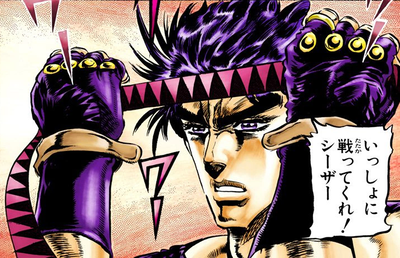 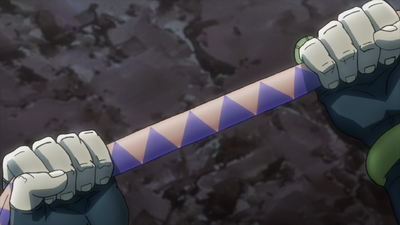 Caesar's headband (シーザーのバンダナ, Shīzā no Bandana) is a tentatively-named key item featured in the second part of the JoJo's Bizarre Adventure series, Battle Tendency. Originally belonging to the Ripple-wielding warrior Caesar Anthonio Zeppeli, it was temporarily inherited by Joseph Joestar through a crimson Ripple bubble following Caesar's demise at the hands of the Pillar Man Wamuu[1].

While initially a fashion accessory, it later plays a crucial role in Joseph's defeat of Wamuu[2] and has since then became a reoccurring part of both Caesar and Joseph's attire in various JoJo-related media.

“
Caesar's trademark is, of course, his bandanna with the triangle marks on it. Even now, I still strongly associate this design with Caesar--not necessarily because Caesar wore it, but because I like the way the colors contrast on the bandanna.
”
—Hirohiko Araki, JoJonium Volume 6[3] 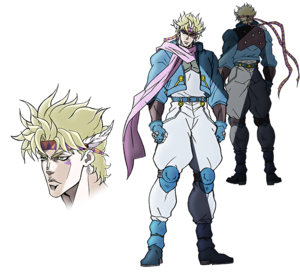 The headband has a simple tessellated triangle motif, splitting it into two colors. When worn by Caesar in the manga, it stops at the wings on either side of his headband, while on Joseph it appears much longer and droops behind his back, not unlike a Japanese Hachimaki. In the TV Anime adaptation, the headband's appearance is consistently longer and its tails can be seen even when Caesar is wearing it.

The series is known for alternating colors between media, the information presented below may or may not be canon.
Headband(Black and maroon)
Headband(Purple and light orange)
Headband(Pink and yellow)
Headband(Dark purple-gray and pale orange)

The headband is first seen worn by Caesar during his initial confrontation with Joseph Joestar at a fountain in Rome, Italy. Caesar continues to wear it throughout the events of Battle Tendency, but its significance is only revealed during his fight with Wamuu in San Moritz.

After being struck by the Divine Sandstorm[4], Caesar grabs Wamuu's poison antidote ring off of him and puts his headband through it. Then, using the last of his Ripple, he creates a crimson bubble that holds the bandana and ring. Joseph receives the bubble and wears the headband onwards[5] to honor his fallen comrade.

In Joseph's defeat of Wamuu[6], after throwing a molotov cocktail at him, Joseph follows up by lighting and throwing Caesar's headband. These items are sucked up by Wamuu, causing the pressurised air inside of him to light, imploding the Pillar Man's body. Because of this, the headband is ultimately destroyed. And so, Caesar is avenged, his sacrifice[4] allowing Joseph to finally triumph over Wamuu. 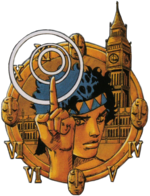 In 2012, as part of JoJo's Bizarre Adventure's 25th Anniversary, several works of art drawn by Hirohiko Araki were sporadically released to the public through various mediums. These artworks are notable in that they debut Jonathan Joestar wearing a headband identical to the one worn by Caesar. First revealed on the side of a QFRONT Building in Shibuya, Tokyo on December 28, 2011, every subsequent artwork released during this period of time featured Jonathan sporting the headband. Examples include JoJo's Bizarre Words, JOJOVELLER and the Hirohiko Araki JoJo Exhibition 2012.