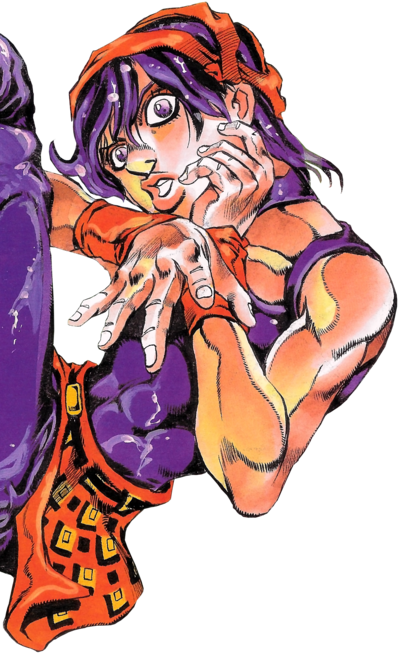 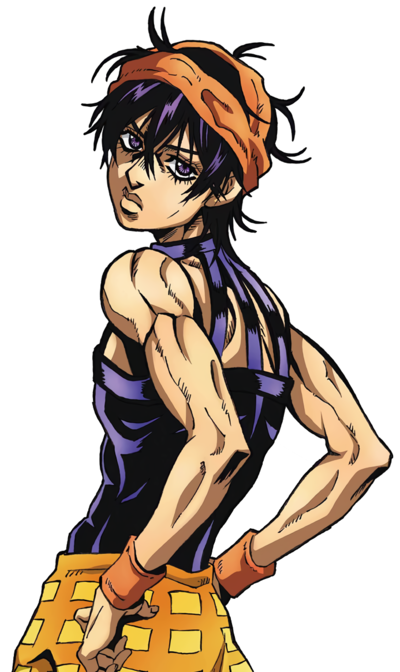 Fist of the North Star[1]

Spicy food
Liquid sounds (like "splat" and "slurp"), though he loves the "klock klock" sound of leather shoes on a winter morning 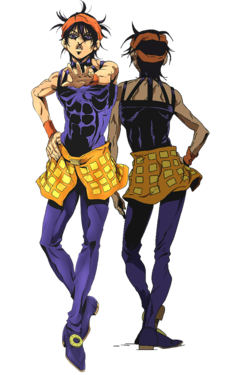 Narancia is a teenage boy of average height and gangly figure. He has a childish face and messy dark hair with bangs over his eyes.

He sports a dark, slim tank top and pants. He has lighter accessories, including a bandana, wrist bands, and a short skirt.

Narancia carries with him a switchblade he sometimes uses to threaten people and has occasionally used in actual battle.

Narancia Ghirga is a rough and choleric youth who demonstrates great loyalty to his comrades.

Narancia's overall behavior could be summed up as being quite childish, best illustrated with his formal education that does not extend past elementary school.[7] His mathematic skills are so low he cannot properly multiply numbers greater than single digits, knowing that 6 x 5 = 30 but then managing to calculate that 16 x 55 = 28.[7] However, by no means does this imply stupidity, as Narancia is capable of countering his opponent's moves under pressure in a life-or-death battle. He is prone to perform violently straightforward actions, regularly catching sneakier enemies by surprise. For instance, he once set fire to a whole street to trap Formaggio.[8] He also defeated Squalo and Tizzano by tricking them into thinking he was still under Talking Head's forced lying while he cut out his own tongue.[9] Moreover, he has mastered Aerosmith enough to play with its subtleties, deducing with a good degree of precision what is happening despite the limited input of his radar.

Narancia is almost as quick-tempered as Fugo, being quite loud, foul-mouthed, and aggressive in his outbursts.[10][11] He notably keeps a pair of switchblades which he regularly uses to threaten others and doesn't hesitate in committing harm or destruction, for instance mistaking a civilian for an enemy gang member and immediately beating him down alongside some of his teammates.[12] He also has a casual disregard of the mayhem Aerosmith causes, his personality is reflected in the plane's formidable firepower yet limited precision. As a result, his battles end with the vicinity being ravaged.[8][13]

Ordinarily, Narancia remains the least mature of the team's members, displaying typically child-like behavior by expressing random thoughts out loud and occasionally playing around. He is usually the one who slacks off the most during missions, for instance neglecting the basic precautions during his shopping trip by ignoring Fugo's advice[14] and even drawing a route directly to the team's hideout on a map.[6] He was also the first one to drop his guard when the group approached their destination in Venice.[15] Narancia was shown to be possessive of his food and is angered if it gets stolen.[16] Having noticed that Giorno was even younger than him, Narancia occasionally reminds the latter of his status as a junior within the squad.

Despite his bratty behavior, Narancia presents a sweet side to those who get to know him. Having lost his mother, and his father being very neglectful, Narancia's valued his friends above all and considered "friendship" the most valuable thing in the world. He was devastated by the betrayal of his childhood peers and eventually found a role model in Bruno Bucciarati. As the man was among the first to treat him as a human being, Narancia became utterly loyal to Bucciarati.[2] Being scared to betray Passione and its dreaded Boss, Narancia asked Bruno to "order" him to betray the gang, showing some lingering emotional dependency on his team leader.[17] Outside of his outbursts, Narancia is usually the nicest person to his companions, and despite a violent start, his relationship with Trish quickly improves to the point they freely have personal talks during the journey, as he and Trish share a common thing in their past tragedy: being betrayed by the ones they trust.[18]

Narancia wishes to make up for his lost years as a delinquent. Conscious about his lack of academic education, Narancia is willing to let Fugo tutor him and expressed a wish to go back to school despite knowing he would probably be made fun of.[7] 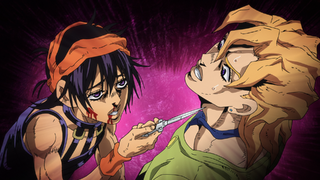