The Second Order from the Boss 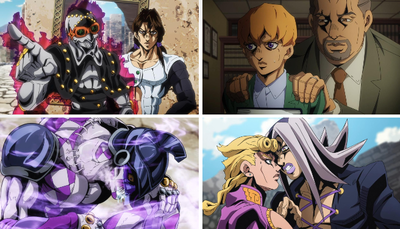 "The Second Mission from the Boss"

The Second Order from the Boss (ボスからの第二指令, Bosu kara no Dai Ni Shirei)[1] is the twelfth episode of Golden Wind and the one hundred twenty-fifth episode of the JoJo's Bizarre Adventure anime. The episode covers from Chapter 478 to Chapter 481 of the original manga.

Giorno, Abbacchio and Fugo are sent to Pompeii to retrieve a key. On the way there, Fugo looks at a mirror and notices the assassin Illuso behind the group, but Fugo mysteriously remains the only one who can see him.

Giorno, Fugo, and Abbacchio are on their way to the famous ruins of Pompeii, an ancient Roman city that was buried under scalding ejecta when the nearby Vesuvio erupted, preserving many details of a typical Roman settlement and making it a precious archaeological site. One of Giorno's remark upsets Fugo who almost snaps but Abbacchio intervenes to calm him. They then finally reach Pompeii. As the trio walks among the ruins toward the famous dog mosaic, Fugo sees a mirror and spots a new enemy barely hiding behind a column: Illuso, one of the assassins from La Squadra Esecuzioni.

Illuso's Stand emerges in the mirror

Fugo immediately warns his teammates but confusion ensues when Giorno and Abbacchio keep asking where the enemy is even though Illuso can be easily seen. Moreover, when Fugo turns to point at the enemy, he sees that no one is behind them. Confused, Fugo sees Illuso summoning his Stand and when Giorno says that he cannot see anyone even if the man is in front of him, Fugo understands that the mirror is linked to the enemy. Fugo pushes his partners out of the way as the enemy Stand attacks, but sees them disappear. Finding himself alone, he is attacked by Illuso and his Stand, Man in the Mirror. The assassin takes out his files and reads out loud Fugo's resume, revealing that he was a highly intelligent teenager whose temper ruined his career when he got thrown out of the university for beating a professor with an encyclopedia and he entered a gang instead. Pointing at Illuso to ask where his teammates are, Fugo notices his wristwatch on the wrong side; his entire surroundings have been reversed and he understands that he's been dragged into a mirror world. For their part, Giorno and Abbacchio do not know what happened to Fugo but Giorno remembers that Fugo was obsessed with the mirror and examines it. When Illuso demands that Fugo reveals Trish's location and the reason for their presence in Pompeii, Fugo refuses, confident of the enemy's impending death in front of his Stand. Yet, Fugo is unable to summon it.

Fugo reveals his Stand, Purple Haze, albeit outside the mirror world

In the real world, Abbacchio suddenly orders Giorno to stay clear. A new Stand has appeared but Abbacchio explains that it isn't an enemy: it is Purple Haze, Fugo's Stand, which is staying idle without its User. Meanwhile, inside the mirror, Fugo is helpless against Illuso, who smugly reveals that he can isolate people from their Stands in the mirror world and beats him bloody with Man in the Mirror.

Bucciarati invites Fugo to join him

Fugo's past is clarified. Born in a wealthy and prestigious Neapolitan family, he was heavily pressured by his parents into excellence to the point he had urges to kill them but controlled his impulses at this point. Entering a university at the age of thirteen, Fugo became the target of a seemingly pedophilic teacher and when he began to harass him, Fugo defended himself and beat up the teacher with an encyclopedia, finally letting out all the accumulated anger and frustration. However, his reputation was ruined and he was thrown out of the university. Thanks to his parents' money, Fugo was judged not guilty by a court but was disowned and lived in the streets from now on. One evening, Fugo met with Bruno Bucciarati who welcomed him at his side and accepted him despite his violent impulses.

In front of Purple Haze, Abbacchio becomes uncharacteristically nervous and as the Stand goes berserk and punches a nearby wall, Abbacchio flees without second thoughts. In the mirror world, it is revealed that Fugo punched the wall on purpose to propel the debris toward Illuso, but Man in the Mirror easily deflects them toward Fugo. Suddenly, Illuso sees a dead crow falling in front of him, followed by a whole murder of crows somehow rapidly decomposing into nothing. Abbacchio finally explains that Purple Haze's ability is to release a deadly flesh-eating virus from the bulbs on its fists, although the virus is destroyed by light, limiting its range. By punching the wall, one of the bulbs cracked, releasing the virus into the air. Although Abbacchio states that Purple Haze mostly embodies Fugo's violent side, the Stand demonstrates a small quirk of personality when it humorously tries to swipe its own drool off it.

Since it is separated from its user, Abbacchio is convinced that Purple Haze is now acting at random, but Giorno doubts it. Indeed, although Purple Haze appeared to punch the mirror by accident, it was ordered by Fugo in a futile attempt to escape the mirror world. Abbacchio decides to prioritize the key and leave Fugo to his fate, but a dispute ensues, Giorno wanting to defeat the enemy and help Fugo first. Angered, Abbacchio leaves Giorno and runs toward the dog mosaic. At the same time, Illuso is on the verge of finishing off Fugo. 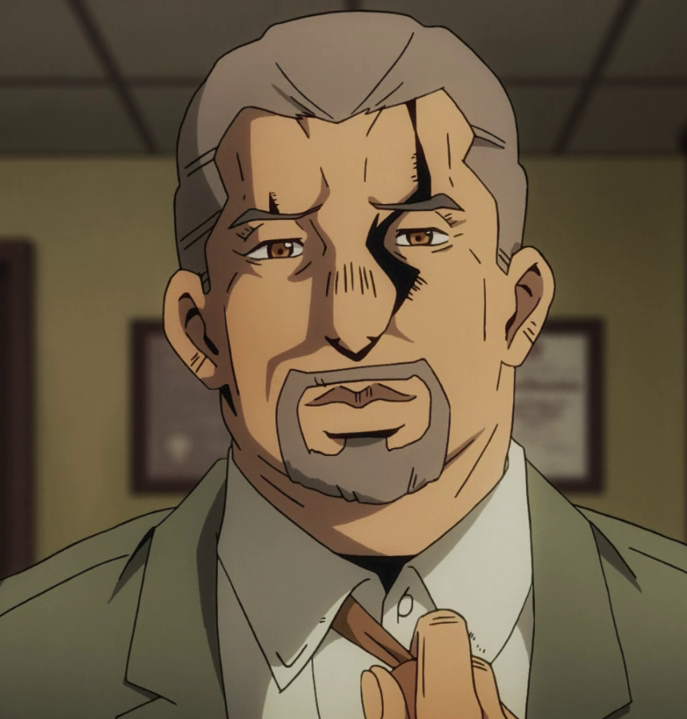 (1st appearance)
Man in the Mirror