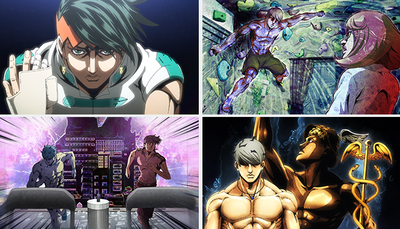 At the heart of Tokyo lies Harajuku in which a young man named Yoma Hashimoto is scouted by a model production agency. Beginning to make a name for himself, Yoma begins to seriously exercise at a gym and develops a narcissistic streak. Yoma's training has become so invasive that his girlfriend, named Mika Hayamura, would trip on weights lying around in her apartment. Obsessed with exercising, following a draconian diet, and abandoning all social activities, Yoma's relationship with Mika sours drastically. At the same time, Rohan develops a rivalry with Yoma at the gym. Obsessed with gaining muscle, Yoma steals 270,000 yen from Mika to buy equipment. She finally snaps and orders him to leave her apartment.

At the gym, Rohan and Yoma run side by side on two treadmills which are connected to the same remote, sitting on a small table between them. As the treadmills have a setting in which they would gradually accelerate up to 25kmph, the two challenge each other into trying to grab the remote first once they reach maximum speed. Remembering his last humiliating loss, Yoma tries to ignore Rohan until Rohan makes the mistake of teasing Yoma about his work, and thus Yoma accepts the challenge. He takes off his sweatshirt to reveal his new ripped body. Losing confidence, Rohan is amazed at the tremendous progress of his rival and notices subtle wing-shaped muscles, from Yoma's legs to his back.

Wanting their game to be "fair", Yoma grabs a dumbbell and breaks the window behind them with it. The loser would inevitably trip and thus propel to a certain death by falling out of the window. Panicking as they approached 25kmph, Rohan tries to preemptively grab the remote, but Yoma intercepts him and breaks three of his fingers. At the same moment, Rohan manages to use Heaven's Door and discovers that Yoma's obsession with fitness led him to kill Mika for "interfering with his training". At 25kmph, Rohan is inevitably bested, but Yoma, claiming his victory, notices too late the scribbling on his hand. Rohan uses his Stand to make Yoma use the remote on Rohan's treadmill instead. Yoma is flung out of the window from the 8th floor of the Morioh Grand Hotel while Rohan's treadmill stops.

Rohan assumes that Yoma had become the avatar of the god of muscle, Hermes. In angering such a being, Rohan has learned that he'd crossed a red line. Hoping to not have invoked Yoma's wrath, he quickly exits the gym.