A Little Story From the Past ~My Name Is Doppio~ 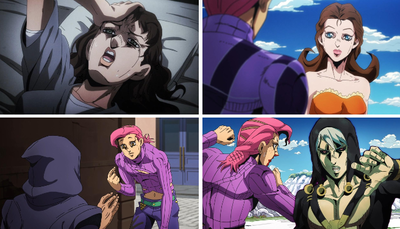 A Little Story From the Past ~My Name Is Doppio~ (ほんの少し昔の物語 ～ぼくの名はドッピオ～, Honno Sukoshi Mukashi no Monogatari ~Boku no Na wa Doppio~)[1] is the twenty sixth episode of Golden Wind and the one hundred thirty ninth episode of the JoJo's Bizarre Adventure anime. The episode covers from Chapter 541 to the first half Chapter 544 of the original manga with the first part of Chapter 569.

A flashback details the Boss's youth. Back to the present, the young Vinegar Doppio is dispatched to Sardinia on the Boss's order, and it becomes apparent that there is more to the teen that at first glance.

The story jumps back to the past, in 1965 in an all-female prison. Despite the fact that all the prisoners and guards were women, one of the inmates who was on her second year of prison inexplicably gave birth to a baby boy. The woman who gave birth claimed she had gotten pregnant 2 years prior, and that the baby's father was already dead. A priest from the mother's hometown kindly adopted the baby and raised him. The infant grew and came to be known as a cowardly and clumsy but well-meaning boy who wanted to become a Sailor. In 1985 when the boy was 19, he then met a young girl, Donatella Una. The priest then saw the couple having a date in the Costa Smeralda and decided to build a garage for his foster son. However, when he tried to dig inside his son's room, he found the young man's mother, who was buried beneath the floor, her mouth sewn shut but kept alive. But, the young boy surprised the priest. That night, the whole village burned to the ground, causing several casualties and disappearances; among the listed death were the priest and the boy.

Vinegar Doppio arrives on the island of Sardinia

Back to the present on the island of Sardinia; a random boy tries to catch a beetle but in pursuing it, strays into the road and in the path of a speeding truck. A peculiar teenager then dashes toward the kid, trying to save him. However, the boy gets out of the way while it is the youth who almost gets run over, getting his suitcase crushed in the incident. Lamenting his bad luck, he then meets a fortune teller having set up shop in an alley. The fortune teller gets interested in the teenager and asks to look for his fortune but the latter politely declines only for the fortune teller to try to prove his talent by claiming that the teenager is native of the island and that it has been a long time since his last stay. Although the teenager is skeptical about the fortune teller, the latter keeps guessing more details about his life, eventually claiming that he has a dark secret and that he somehow has a teenage daughter he seeks. Getting excited, the fortune teller harasses the teen to get him to show him his palm and even proposes to pay, startling him until the teen snaps.

Suddenly, losing control, the youth grabs the fortune teller by the throat and disturbingly grows into a grown man: the Boss himself. The Boss realizes that the fortune teller is not a Stand User, but his talent represents a potential danger for his identity. Although he sentences the fortune teller to death, he also gets him to divine Risotto Nero's whereabouts, to which the fortune teller tells him that he is close and will seek revenge. Satisfied, the Boss lets the fortune teller loses his mind and finishes him off with a lethal punch from King Crimson. Incidentally, the boy from earlier has partially witnessed the murder but thankfully, it is the youth go gets out of the alley, having forgotten the incident already. Taking a taxi to the Costa Smeralda; the teen incidentally comes close to Risotto Nero himself.

Arriving near the picturesque Costa Smeralda, the teenage boy is unfortunately victim of a scam from the driver's part, who eventually manhandles him to get more money from an envelope. Again the teen goes berserk and almost gouges out the driver's eye because said envelope contains a photo of Donatella Una. However, he then hears a "call" from the Boss, mistaking a decorative figure for a phone, and proceeds to talk to himself. The Boss dissuades his host, whose name is revealed to be Doppio, to cause more trouble than it's worth, letting the taxi driver flee, and then warns him that the enemy is already here: the assassin Risotto Nero can be seen up the rocky hills watching him.

Although the Boss warns Doppio that Risotto must be eliminated and that his powers are unknown, the teen proceeds to forget everything once the Boss hangs up. Trying to gather his items, Doppio suddenly notices Risotto Nero posing near him and throwing a knife at his feet. Startled, Doppio trips and crashes into a rock while Risotto has disappeared. When Risotto reappears, Doppio tries to play the part of a tourist, causing the assassin to carefully judge the situation and gauge Doppio's dangerousness. However, just before Risotto approaches to take his knife and enters King Crimson's lethal range, he then notices that Doppio is trying to hide an envelope from him and orders him to show it to him. Doppio successfully hides Donatella's photo beneath his shoe but makes the mistake of glancing over the direction of a distant rumbling noise. Risotto picks on the clue and sees that the teen could detect the noise that Aerosmith was causing, outing him as a Stand User. Risotto realizes that the teen represents a crucial mystery due to his status as one that the Boss trusts and his apparent wimpiness. When Doppio gets angry and starts to change, his metamorphosis is interrupted as a handful of razor blades appear in his stomach, forcing him to vomit them out before they kill him. Intrigued, Risotto Nero decides to execute the teen here and there.

Furious, Doppio runs at Risotto in order to get into range, but the assassin guesses that his Stand ability is short-ranged and makes nails appears in Doppio's cheek to stop him; Risotto then disappears among the rocks. The Boss thus calls Doppio, who grabs a frog and uses it as a phone. Telling his subordinate to get close to the assassin, he then reassures him and reminds him that he can wield a part of his King Crimson. 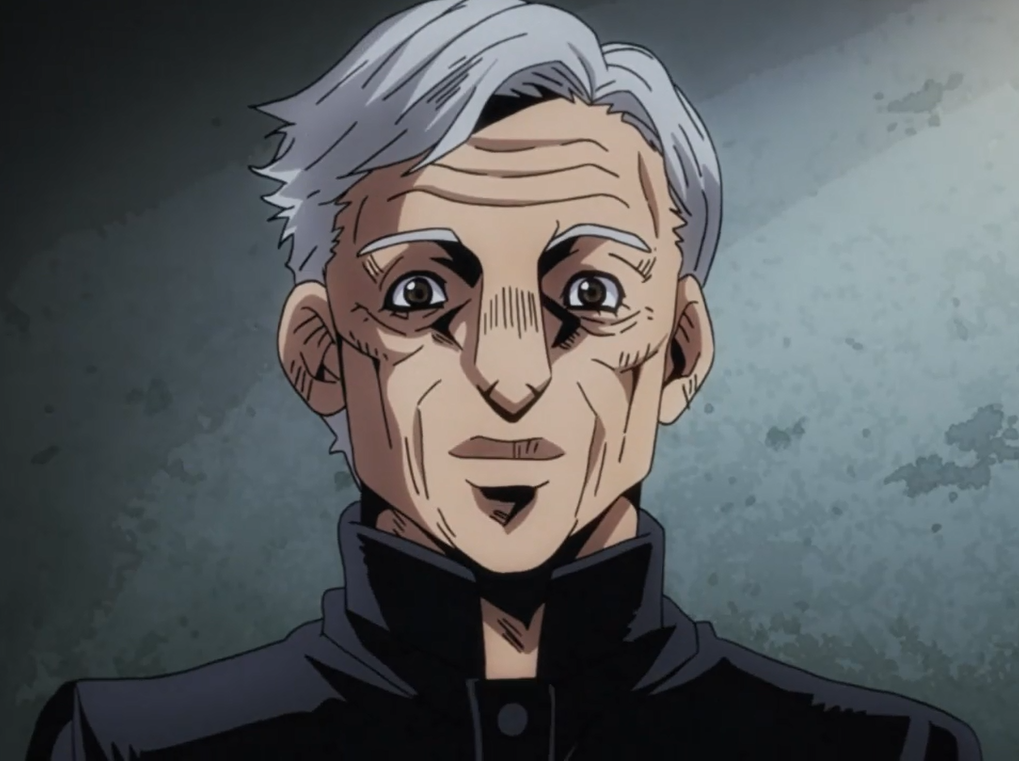 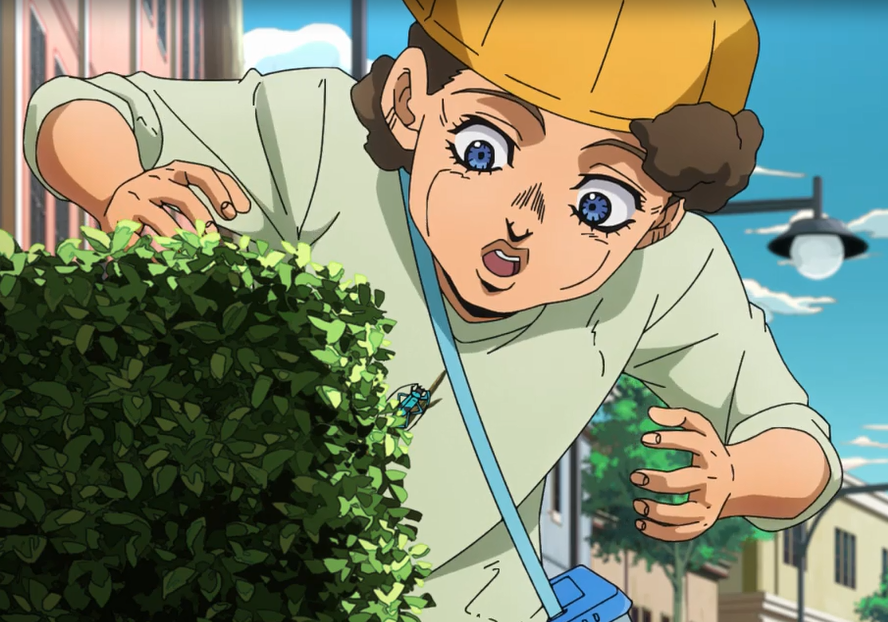 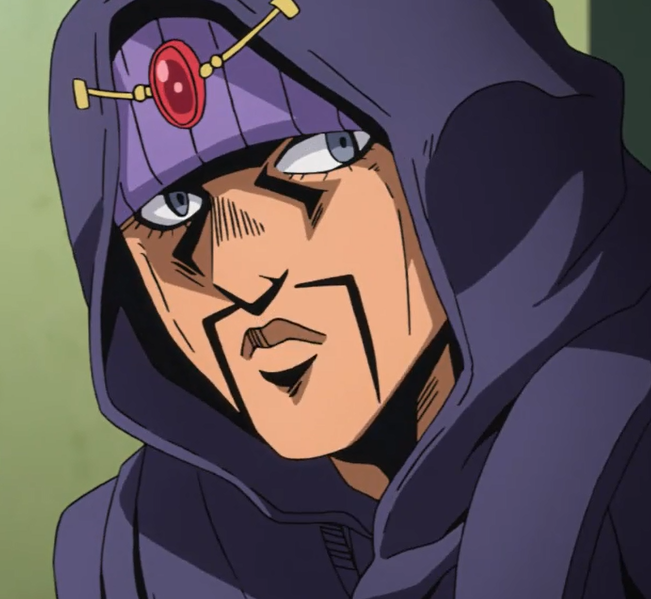 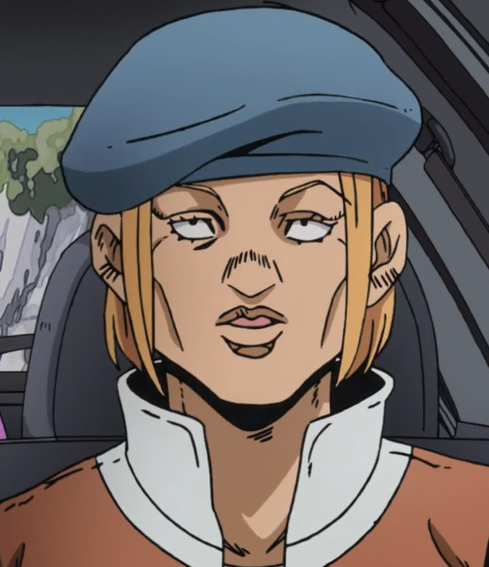 “
Since this episode is between Risotto and Doppio and Abbacchio doesn't make an appearance, the first time I saw it was when it aired on television. Isn't Risotto cool? He's the leader of the Hitman Team, and he's handsome. I get why he's so popular. The back and forth of the Stand abilities was also impressive.
”
—Junichi Suwabe, Blu-Ray limited edition commentaries
“
I was enchanted by Hiroshi Naka's performance as the fortune-teller. His near-insane obsession with Doppio's palmistry was so powerful! I had a hard time with Risotto's first line. It's not emotionally charged, but I needed to convey that extra "something" inside of him. I was nervous thinking this one line would determine the trajectory of the episode.
”
—Shinshu Fuji, Blu-Ray limited edition commentaries
“
1. Scenes of the Boss's Birth

Director Kamei reflects on various details about the scenes: “There were things that were never made clear in the manga that I had to interpret. After much thought, I decided he was born with both personalities between which he could switch freely. Doppio is pure and good, so his world is painted beautifully, but it's interspersed with madness. Considering Diavolo's twisted sense of love, the hair placed by his buried mother is intentional, like a talisman that means he's always by her side. If he was careless and left a single hair, it would just be hard to see. But with this, his twisted worldview is clear as day. Also, Doppio picks up the pickax that the priest puts down.

Kamei was struck hearing Soma Saito's rendition of the ringtone and vowed to animate the shots with equal fervor. “I made sure the switch between his states were instantaneoushe's in a trance when he's voicing the ringtone, he's tense when he's searching for a phone. The taxi driver sort of speaks on behalf of the viewers, sensing his dangerous aura."

"We made Risotto look extra cool when he realizes that Doppio is a Stand user," notes Kamei. The storyboards laid out Risotto's pursuit and Doppio's increasing sense of crisis, interjected by super close-ups of Aerosmith. “To make sure the peak arrived at that close-up, I had the staff edit three frames at a time, and I also made many requests during sound mixing."
”
—Takahiro Kamei, Blu-Ray limited edition commentaries