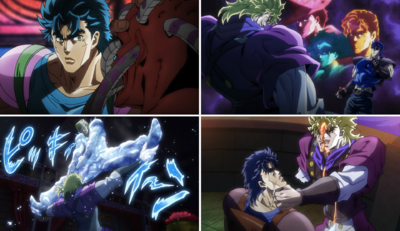 Jonathan uses Luck and Pluck to cut Dio in half

Jonathan thus steps in while Speedwagon, Straizo and Tonpetty stay back to fight Dio's Zombies. Inspired by Dire, Jonathan infuses the sword he had received earlier from Bruford, Luck and Pluck, with the Ripple, so that Dio will not be able to touch him. As the battle begins, Jonathan distracts Dio with roses and uses the Vampire's blind angle to cut off his arm then cuts him in half. However, Dio freezes the sword and Jonathan's hand before he can send the Ripple. Jonathan is thus immobilized and briefly at a disadvantage, but he exploits a fire behind Dio to heat the sword and free himself. Nonetheless, Dio breaks the sword and manages to freeze JoJo's fist before the Ripple can reach him. 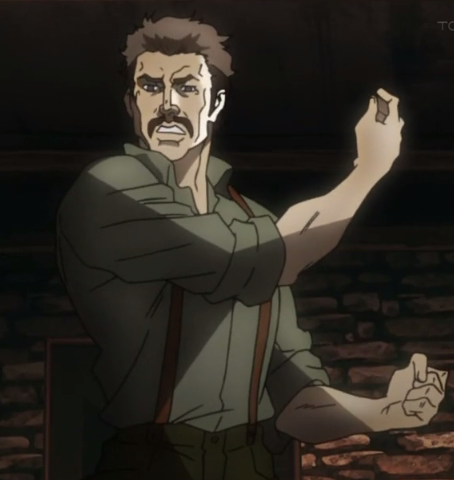 Commentary
“
Masahiko Komino was the animation director for this episode, and he's a big fan of JoJo. He preferred rendering the characters as close to the manga as possible, giving a very intense result. Ideally, it was the result we wanted for every episode. But a TV series has many imperatives to respect and we often had to make concessions. This time, the satisfaction was at its peak, we had the best animators to render the best battle. I also like the zombies' small moment of glory, where they use their Blood Vessel Needle Attack.