A Letter from the Past (story arc) 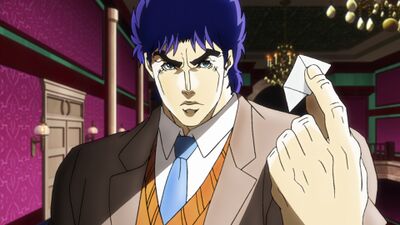 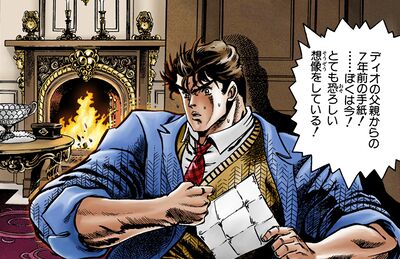 A Letter from the Past (過去からの手紙, Kako kara no Tegami) is the second story arc in Phantom Blood.

It narrates Jonathan Joestar's discovery of Dario Brando's letter, as well as his efforts to prove that Dio Brando is trying to poison his father.

It is the year 1888, and the mysterious serial killer Jack the Ripper is at large. As a rugby match at Hugh Hudson Academy reaches its final moments, Jonathan Joestar grabs the ball. Though he remains upright as three players tackle him, a fourth manages to throw him off-balance. As he falls, Jonathan passes the ball to Dio Brando, who is able to score and win the final match before their graduation from the academy. Dio is graduating as a top law student, while Jonathan intends to pursue a career in archeology. Dio suggests that the two of them tell their father of their victory; Jonathan internally wonders at what point Dio began calling George his father. While the two of them appear to be close, Jonathan doesn't feel any real friendship towards his adopted brother, which he blames on the events of their youth. Meanwhile, Dio thinks about his plan to steal the Joestar fortune, which has nearly reached fruition: he has now come of age and can legally inherit the fortune.

Back at the Joestar Mansion, George is bedridden: what at first appeared to be a common cold has developed into a harsher, unknown illness. George congratulates Jonathan and Dio on their rugby victory, praises his two sons' accomplishments, and promises to support Dio in whatever he does after graduation. 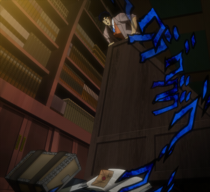 That night, Jonathan pricks his left index finger with a knife and lets his blood drip onto the Stone Mask. Just as it did seven years ago, the mask briefly sprouts tendrils before reverting to its normal state. Jonathan remains puzzled by the mask's strange mechanisms, but hopes to discover its secret and present it to the academic community. While looking through some books, Jonathan accidentally knocks over a case of his father's books and notices a letter among its contents. Reading Dario Brando's name on the envelope, Jonathan decides to read the letter's contents. Meanwhile, George's butler allows Dio to take his master's medicine to him, having become too old to comfortably walk up the stairs. Dio prepares to swap out the butler's medicine with his own, but Jonathan confronts him before he can do so. Reading Dario's letter aloud, Jonathan reveals that his father's "symptoms" are the same as Dario's.[1]

A flashback reveals Dio's grudge against Dario. Dario rejects the medicine Dio brings him, instead preferring to handle his illness by drinking. Throwing his mother's dress at the boy, Dario orders Dio to sell it and use the money to buy alcohol. Driven to anger by his father's treatment of his mother, Dio resolves to send him to hell. Later, Dio visits a shady merchant in the slums of London, who predicts that he will live a long and tumultuous life from the moles on his ear before selling him a dose of poison.

Jonathan announces his intention to have the medicine investigated, but Dio grabs his hand. Though Dio warns him that investigating the medicine means doubting their friendship, Jonathan challenges him to swear on his father's honor that he's innocent. Dio is driven to rage by the thought of his father having honor, confirming Jonathan's suspicion that he murdered his own father. After a brief fight, Jonathan throws Dio off the second floor of the mansion. With their emnity restored, Dio resolves to cleanly murder his adoptive brother before the medicine's analysis is complete; Jonathan resolves to protect his own family and put Dio behind bars.[2]