Tarkus and the Dark Knight Bruford 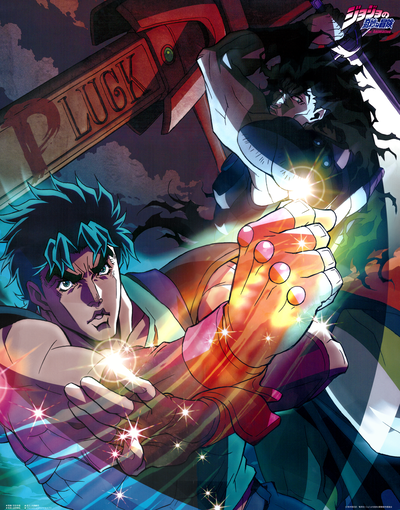 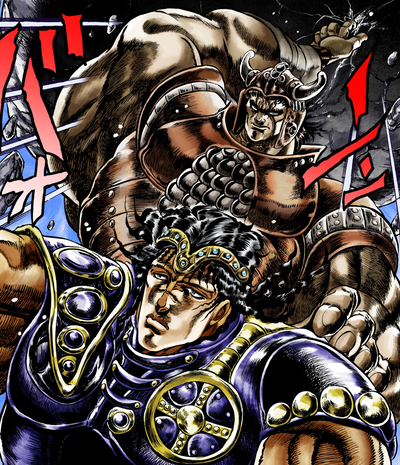 Tarukus and the Dark Knight Blueford

It narrates the battle between Jonathan and one of Dio's zombies, the knight Bruford.

Jonathan and Zeppeli maintain contact with Dio's fist. The two Ripple users simultaneously charge Ripple into their arms, but Dio freezes their arms before it can reach him. Jonathan's arm begins to split open, forcing Zeppeli to kick Dio in order to save his pupil. Dio splits Zeppeli's leg with his fingers before throwing both humans back down toward Speedwagon. Jonathan and Zeppeli contemplate their powerlessness against Dio's technique as the vampire gloats.

Satisfied that the Ripple poses no threat to him, Dio calls forth two of his servants: Tarkus and the Dark Knight Bruford. With Zeppeli sidelined due to his frozen arm, the two zombies run toward Jonathan to attack. Speedwagon decides to put Zeppeli's arm against his chest to unfreeze it, causing Zeppeli to reconsider his opinion of him. Meanwhile, Bruford wraps his hair around Jonathan's arm and begins to suck his blood through it.[1]

The story of Bruford and Tarkus is revealed: the two were exceptionally powerful knights during the Tudor dynasty at the service of their gentle liege, Mary Stuart. Queen Elizabeth I started a war against Mary and eventually prevailed, taking Mary prisoner. Bruford and Tarkus surrendered when Elizabeth threatened to kill their liege. However, before their executions, the executioner showed them Mary's head and revealed that the prisoner Elizabeth kept was an impostor. Both knights expired cursing Elizabeth, and Dio resurrected them with the intent of using that rage for his own purposes.

Though Jonathan is unable to send Ripple through Bruford's hair, he manages to burn the hair off by setting his hand on fire with Ripple energy.[2] Impressed by Jonathan's willpower, Bruford asks Dio for and receives permission to fight Jonathan one-on-one. Bruford begins his attack by revealing his Danse Macabre Hair, a technique he utilized during the 77 Rings challenge that allows him to swing his sword Luck using his hair. Jonathan dodges the attack but falls into a lake, with Bruford pursuing him. Assured of his minions' victory, Dio leaves for Windknight's Lot, claiming that he will zombify the entire town in twenty-four hours. Though Jonathan is unable to breathe underwater, he swims downward rather than upward: finding an air pocket at the bottom of the lake, Jonathan takes a single breath and performs an Overdrive through the water.[3]

Bruford is launched out of the water, but Jonathan notices that the Ripple has only grazed his forehead. Energized by his opponent's strength, Bruford announces his intent to hold nothing back; Bruford unleashes his hair's full power, tying Jonathan to a tree. With his opponent immobilized, Bruford swings his sword toward Jonathan's neck. However, Jonathan kicks the sword, sending the Ripple through the metal and melting Bruford's arm. Freeing himself of Bruford's hair, he pummels the knight with a Sunlight Yellow Overdrive.[4] Yet Bruford seemingly survives Jonathan's Overdrive and, stating that the pain is nothing to him, prepares to attack once more.

Bruford bequeaths his sword to Jonathan as he disintegrates.

As Bruford lunges toward him, Jonathan doesn't move; surprisingly, Bruford stops his own sword, which only barely cuts Jonathan's cheek. Jonathan has already decided to stop fighting, having come to the realization that Bruford is no longer simply undead. As flowers bloom around the knight's feet, Zeppeli deduces that the Ripple has revived Bruford's human soul even as it destroys his undead body. Grateful toward Jonathan for reminding him of his humanity, Bruford presents Jonathan with his sword: painting the letter "P" onto the blade with his blood, Bruford changes its name from Luck to Pluck before he finally disintegrates completely.

Moved by Bruford's honor, Jonathan vows once more to destroy Dio and the Stone Mask. Suddenly, Tarkus tramples the remains of his dead comrade, calling Bruford a coward and a disgrace to those who have completed the 77 Rings, and callously kicks the shattered armor in Zeppeli's direction. The Ripple master realizes that the shrapnel is impossible to dodge entirely, but uses the Ripple to minimize the damage. Injured but able to fight, Zeppeli remarks that it will be difficult to free Tarkus from Dio's control; the zombie knight replies that he will make mincemeat out of him and his companions.[5]